A 3-month long survey on the socio-economic conditions in Bihar was organized by the CPI(ML) in 2014. About 2 lakh rural and urban and poor and minority families had been surveyed as part of the Party’s Bihar ka sach, logon ka haq campaign and an in-depth analysis of the data and information thus collected has been done. The survey documented a wide range of issues such as changes in the socio-economic and educational condition of rural and urban poor and minorities and the ground realities regarding implementation of various government projects. The survey had also identified new and emerging areas for concern for the peoples’ movement.

A two day State level Party workshop was held at Ram Manohar Lohiya College in Muzaffarpur on 20-21 September. In this the Bihar State committee of the Party decided to launch a people’s rights movement under the central slogans of “Badlo gaon, badlo Bihar, haasil karo apne adhikar” and “Loot Jhoot ki chhoot nahi, haq chahiye, bhik nahi” (Change the villages, change Bihar — Achieve your rights”, and “No room for lies and loot—We demand rights, not alms” based on the issues that came to the fore through the 2-month long “Gaon ka sach, logon ka haq” (Truth about the villages, people’s rights) survey conducted by the Party.

On 16 November 2014, a massive jan sunwai was organized by the Party in Patna which reverberated with slogans for Left unity and a collective struggle for peoples’ rights. Left leaders from various parties called for a strong joint Left struggle against the Delhi and Patna governments. The jan sunwai was attended by CPI(ML) General Secretary Com. Dipankar Bhattacharya, CPI(M) General Secretary Com. Prakash Karat, CPI national secretarial board member Com. Atul Kumar Anjan and other Left leaders. Representatives from SUCI(C), Forward Bloc, various peoples’ movements as well as journalists and intellectuals from the city attended in large numbers.

Accounts shared by the survivors of the Dalit Massacres 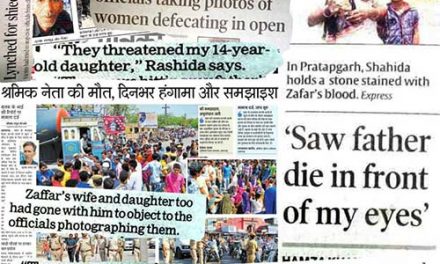