The struggles against feudal oppression and privilege in Bihar, especially against the brutal massacres perpetrated by upper caste militia such as Ranveer Sena, has necessitated a protracted and multifaceted campaign. It is a campaign which has seen a strikingly brave assertion of marginalized voices  against communal and feudal oppression.

In this struggle, every act of social, economic and political assertion, every blow to feudal privilege was met with brutal reprisals. Ever since its formation, the Ranveer Sena – which has enjoyed the political patronage of a whole range of ruling class forces such as the BJP, RSS, Congress, RJD and JD(U) – has tried to terrorize the poor and the marginalised into submissive silence. Very public massacres of dalit and Muslim agricultural labourers were carefully scripted in order to instill the maximum terror, and to dissuade further assertion of marginalised forces. CPI(ML), which is the most consistent and radical voice speaking up for the rights of the rural poor in Bihar, has had to constantly contend with this well-orchestrated, powerful campaign of terror.

In 1996, brutal massacres were orchestrated in Nadhi and Bathani Tola (both in Bhojpur). In Bathani Tola, 22 dalit and Muslim agricultural labourers were killed – most of them women and children. The very next year, in 1997, 10 dalits were killed in Haibaspur (Patna) and 10 in Ekwari (Bhojpur). It was in this year too that 61 dalits were killed in Laxmanpur Bathe (Jehanabad) – which the then President termed as a ‘national shame’. The Nagri, Shankarbigha and Narayanpur massacres followed in the years to come.

Feudal-landlord armies were no aberration in Bihar’s landscape. What differentiated the Ranveer Sena, and rendered the struggle against them so difficult, was the massive political influence and patronage they enjoyed. From communal casteist fascist forces such as the RSS and the BJP, to the so-called ‘social justice’ forces such as RJD and JD(U) – across the political spectrum in Bihar, ruling class forces were united in their overt and covert support for the Ranveer Sena. Laloo Yadav is known to have remarked that in order to curb the growing assertion of CPI(ML), he was willing to join hands with the “forces of hell”! And, one of the first things Nitish Kumar did on coming to power in Bihar was to disband the Amir Das commission which had been set up in the wake of brutal massacres to look into the deep political connections of the Ranveer Sena with existing ruling class formations. Amir Das has publicly talked about the difficulties he faced in making his report, and has moreover said in no uncertain terms that several important leaders from across Bihar’s political parties have been implicated in his report for supporting the Ranveer Sena. This report, quite naturally, never saw the light of the day!

If brutal massacres were scripted in Laloo’s regime, legal massacres happened during Nitish’s purported ‘sushaasan‘! People who had lost their relatives, friends and comrades to the Ranveer Sena’s marauding mobs, braved a terrifying atmosphere of daily intimidation and even threats to their lives to depose against and identify the murderers. These depositions resulted in several convictions at the district courts in Bihar, and several members of the Sena were awarded life imprisonments and death sentences. However, the massive clout of the Ranveer Sena was soon to be seen: in case after case, the Patna High Court chose to disbelieve the brave testimonies of the witnesses of these massacres, and all the convicts were shamefully acquitted. It is as if no one killed in Bathe and Bathani! Right now, these acquittals are being challenged in the Supreme Court – and the struggles and campaigns for justice against caste-class and feudal oppression continue against all odds. 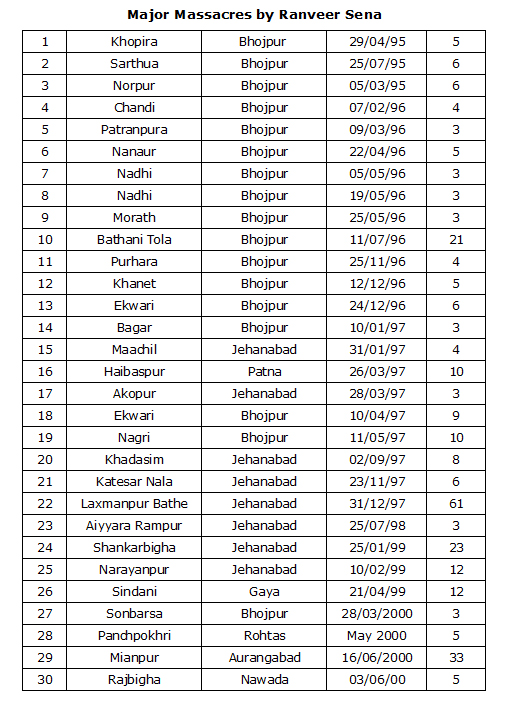 Dateline of a protracted political struggle against feudal-communal forces: