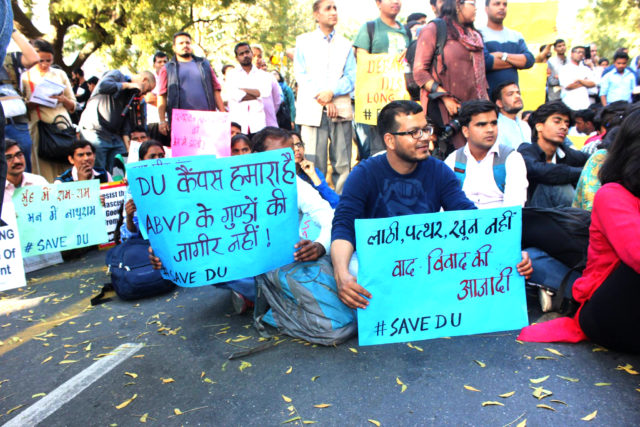 (AISA Activist Madhurima Kundu, a former DU student who is now a student at Ambedkar University, writes about the ABVP attack she witnessed on a seminar at Ramjas College.)

The English Department of Ramjas College in association with WordCraft, The Ramjas Literary Society, organized a two day event on 21st and 22nd February titled “Cultures of Protest: Seminar Exploring Representation of Dissent.” A series of Seminar on topics ranging from Dalit Resistance, State Repression to Student Politics, and linguistic dissent was to be held. Sadly, of the eight seminar sessions and one performance that were scheduled, only two happened.

I had come to attend the Seminar at Ramjas. It was around 1 pm when the upheaval started. The electricity supply of the conference room got suddenly cut off. We started hearing loud chants of Bharat Mata Ki Jai and then sounds of loud music from the amphitheatre which is just beside the conference room. Despite these disturbances the seminar went on and around 15 minutes later, the second session of the day “Mapping Dalit Resistance” ended and lunch was called. But before we left the room Mukul Manglik, a professor from the history department of our college, who was also scheduled to speak on student politics the next day, informed us about what had been happening outside the room for the last 2 hours. Members of ABVP had been organising a kind of a lynch mob. The union president, who is a member of ABVP, had gone to the principal with a petition asking him to cancel the invitation to Umar Khalid, a student of JNU who was scheduled to speak after the lunch on his PhD work on Bastar and Shehla Rashid, ex-JNUSU Vice President. Teachers tried to reason with them but the ABVP threatened them with violence and hurled abuses at them. Even though the Ramjas principal maintained that inviting Umar Khalid and Shehla Rashid to speak is the democratic right of the students, ABVP goons only got more aggressive and more violent. Police refused to guarantee security and even went on to say that if any mass violence were to happen, the organisers, not the perpetrators of violence, would be held accountable. As a result, Umar Khalid was disinvited. When we heard this we all felt a sudden sense of anger. A mob had been allowed to censor a seminar and prevent us from hearing a fellow student speak. All the students in the room made a spontaneous decision to protest in a form of peaceful rally in the college. We left the seminar room and marched around in the college. As we came back to the gate of the seminar room, ABVP organised a mob that was shouting slogans aggressively at us. Tree branches and buckets were thrown at us from the canteen roof. ABVP leaders were openly threatening the students. Police tried to calm the situation down by trying to resume the seminar but ABVP goons were trying to block the entrance of the seminar room. Some students managed to go back in with the speakers and the professors. I was left behind as ABVP had managed to block the entrance. I was trying to grasp what had just happened and suddenly I heard glass shattering. I looked up and it was the window of the seminar room. ABVP goons were throwing stones into the seminar room now, and students and teachers inside the room were trapped. They remained there for 45 minutes under the desk saving themselves from the stones. After that, police managed to help them escape from the back entrance.

The next day I went to University, thinking I had already witnessed the worst. I was preparing to join a solidarity March from Ramjas College Gate to the Maurice Nagar Police station that had been called to demand police action against the ABVP perpetrators of violence. Just then, one of my friends who is member of WordCraft told me that some of the organisers had been attacked. This was when fear crept in.

All the students who were supposed to join the protest outside Ramjas college sat on one of the lawns singing songs of love, friendship and resistance. ABVP had again mobilised a kind of fascist lynch mob and had surrounded the students and between them was the cordon of police officers. As the students stood up peacefully and silently as well (they didn’t want to raise slogans) to join the protest that was supposed to start outside of the college, ABVP cadre started assaulting everyone. Those who were using mobile phones to record events from classrooms had their phone smashed. Students were chased. Outside the college over 200 students were waiting to start the March. I joined them. I called up my friends and asked how they were. They were stuck outside of the canteen and again ABVP goons surrounded them and blocked them from leaving the college to join the protest. We, the students waiting outside the college got very worried and asked the police there to ensure safety for the students trapped inside the college. We started raising slogans and in a few minutes ABVP goons came out of the college and started assaulting us. They were going after students, teachers, journalists – anyone they got their hands on. Police had given the ABVP goons full impunity (earlier yesterday ABVP goons were chanting “yeh andar ki baat hai, police hamare sath hai” (It’s an open secret, the police is with us). We decided to start the March.
All through the March stones were being pelted at us. Mobs of ABVP cadre were slapping and punching people, and attacking people with bottles, bricks and kicks. Some of my friends were seriously hurt. I too was bruised. It was like the familiar University had turned into a war zone. We reached the Maurice Nagar police station and we decided to sit outside until an FIR was filed against the perpetrators of violence. We stayed there for hours facing intimidation until the Police lathicharged us, dispersing many and detaining several of us. They took us away in a bus that eventually left us at the Hauz Khas metro station. The students stuck inside the college were escorted through the back gate into a police bus which left them at Civil Lines.

Till late at night, we kept hearing from DU students who had taken shelter at the homes of friends, faculty or sympathetic people. There was a climate of fear, with reports of ABVP attacking people at bus stops and raiding hostels.

The next day a huge protest was held at police headquarters where hundreds of students, teachers and academicians demanded that Delhi Police file an FIR. Police shamefully filed a single FIR stating that a brawl/clash had taken place at Ramjas college where students from both sides were assaulted. We demanded a separate FIR. We stayed outside the police headquarters till the evening but nothing much came out of it.

For days after that, an uneasy, ominous silence descended on DU, and even spread to other campuses. Classes were being cancelled. Events were being cancelled. Students and teachers were in a state of fear. Some of DU’s and Ramjas’ best teachers were unable to take classes, apprehending more attacks. Everyone was worried about Prasanta Chakravarty, the teacher who had nearly been strangled by the ABVP as well as injured by kicks in the kidneys. Under ABVP pressure Khalsa College cancelled a street play competition. Ambedkar University postponed an talk that had been scheduled with Women Against Sexual Violence And State Repression (WSS) to mark the 26th anniversary of the Kunan Poshpora rapes by Army in Kashmir.

Meanwhile, AISA activist Pritish Menon Azad was assaulted by ABVP leader Satender Awana in a TV studio. A DU student Gurmehar Kaur faced rape threats, and was then trolled by Modi Government Ministers and some celebrities after she ran a post on social media declaring ‘I am not afraid of ABVP.’ Gurmehar was attacked for a video she released last year speaking of her struggle to overcome anti Muslim prejudices after she lost her father in the Kargil conflict, when she was very young. She told of how her mother helped her overcome prejudice. For her anti-war pro-peace video, Gurmehar was mercilessly attacked.

Breaking the miasma of fear and ushering in fresh winds of confidence, DU witnessed a massive historic resistance on 28 February. Over 5000 students – mostly from all over DU, including far-flung colleges in all directions of Delhi, as well as from JNU, Jamia Millia Islamia, AmbedkarUniversity, Ashoka University etc, marched from Khalsa College to Arts Faculty condemning the hooliganism and violence unleashed by ABVP. That evening, ABVP cadre again attacked AISA activist Aman Sinha in DU.

On 4th March, a Citizens March to Parliament saw a range of academicians, activists, teachers join in solidarity with the Ramjas students.

While all these intimidation, slurs, and organised violence felt personal, a constructive look over whatever happened is enough to tell that this was part of the larger Hindutva agenda of RSS-BJP. The vigilantism and hyper-nationlism of ABVP has been brazenly outward since 2014 when BJP was elected to power. From vandalizing a movie screening in KMC to Ramjas, from Rohith’s institutional murder to the attack on JNU last year to Najeeb’s disappearance, ABVP has been in the middle of all of it.

In the latest attacks, the JNU VC has shut down nearly 86% of new admissions to research courses. But the silver lining to the dark clouds hovering over our Universities is that the students and teachers are refusing to be intimidated. They are fighting back with spirit and determination. We shall fight, we shall win! 