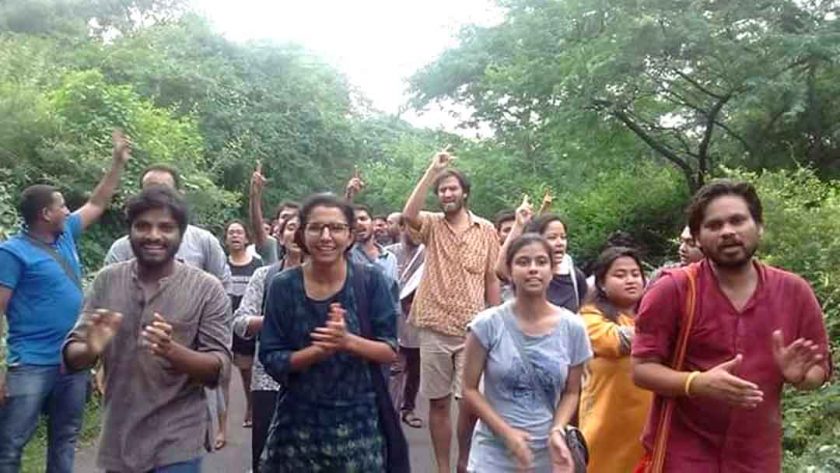 The emphatic victory of the United Left panel in the JNUSU elections and ABVP’s loss of ground in Delhi University as well as campuses in Rajasthan, Assam and Punjab tells its own story: students all over India, including in BJP-ruled states, are rejecting the RSS attempts to ‘capture’ campuses through ABVP thuggery and the faux-nationalist discourse of tanks.

In JNU, the All India Students’ Association (AISA), Students Federation of India (SFI) and Democratic Students Federation (DSF) came together to form a United Left Panel that contested the elections mainly on the plank of defending JNU in the face of the series of attacks unleashed by the BJP-appointed JNU VC. These attacks included slashing of research seats and research fellowships, removal of deprivation points and undermining of reservations in admissions, protection to ABVP cadre who beat up a student Najeeb leading to his disappearance, and a systematic witch-hunt of activists including even the denial of registration to Mohit, the outgoing JNUSU President, for refusing to pay an unjust fine imposed on him for leading a peaceful protest for justice for Najeeb.

The United Left (AISA – SFI – DSF) has won all 4 central panel seats and 13 councilor posts across SSS, SIS and SL as well as the convenorships in all these schools. Comrade Geeta Kumari of AISA was elected as President, Comrade Simone Zoya Khan of AISA was elected as the Vice President, Comrade Duggirala Srikrishna of SFI as the General Secretary and Comrade Shubhanshu Singh of DSF was elected as the Joint Secretary of the Union. The left unity defeated ABVP’s candidates by margins of 464, 848, 1107 and 835 votes respectively in the posts of President, Vice President, General Secretary and Joint Secretary. The BAPSA polled third on all posts. Apart from some ritualistic noises against ABVP, the mainstay of the BAPSA campaign was the slogan of ‘lal bhagwa ek hai’ (red and saffron are the same) and a vitriolic attack against the Left. They also kept repeating some of the alibis which the ABVP peddled so as to confuse the students and deflect attention from the Administration-inflicted massive seat cut. The results show that their line did not find favour with most students who were looking for a committed and united resistance to fascist forces.

Meanwhile in DUSU elections also, the ABVP lost the seats of President and Vice President to the NSUI. This too was a rebuff of the ABVP by DU students, for the ABVP’s disgraceful violence against teachers, students and seminars in the past year. AISA, which contested the elections on the slogan ‘A Campus Without Violence, A Country Without Hate Must Be The DUSU Mandate’, retained its position as a significant and growing third force, with votes of 5000 on President, and nearly 7000, 8000, and 9000 each on the other three posts.

ABVP also lost the top three posts in the Rajasthan University’s Student Union, and fared badly in the Gauhati University elections as well. All in all, the young people are expressing their anger against a politics that has contempt for education and scholarship and a love for censorship, violence, hate-mongering and spreading of fakeries both in curricula as well as in political discourse.

Most encouragingly, the Democratic Teachers’ Front won the DUTA elections for a record fourth year running, defeating the RSS-backed National Democratic Teachers’ Front. The DUTA elections also are a powerful mandate by the academic community of one of India’s largest Universities, in favour of the forces that are resisting the RSS-BJP tanks from crushing dissent and dialogue on campuses.

Immediately after the JNUSU polls, the JNU Administration has unleashed its latest attack: it has sought to dismantle the experienced and autonomous GSCASH and replace it with a pliant, ‘puppet’ Internal Complaints Committee that will have no autonomy to deal with the issue of sexual harassment on campuses. Students and teachers are spiritedly fighting to defend the GSCASH, with huge mobilizations on campus as well as by approaching the Court. As we go to press, the JNU students and teachers have succeeded through a court order in preventing the JNU Administration from forcibly grabbing sensitive and confidential GSCASH files, for the time being.

Meanwhile, the Sanghi Thought Police continues its work on campuses – with IIT Madras administration stepping in to cancel invitations that students had extended to academics and activists to address public meetings.

But students and teachers are fighting back, finding and retaining their voices and forging unity! They shall fight, and they are winning! 