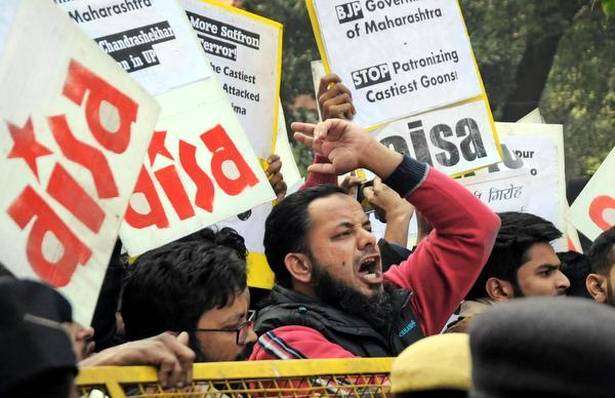 On January 1 every year, Dalits and Bahujans gather at Bhima Koregaon near Pune to commemorate the anniversary of the Bhima Koregaon Battle of 1818 in which the British Bombay Native Infantry, comprising mostly Mahar Dalit soldiers, defeated the Peshwa army. This date is revered by the Dalits as a victory against the Brahminical Peshwas. This year the function was especially important since it marked 200 years of the battle.

But this year, those gathering for the function were attacked violently by men carrying saffron flags, and one man was killed and several injured as a result. At Vadhu Budruk close to Bhima Koregaon, stones were pelted at Dalits and organised ‘social boycott’ against Dalits en route to the function.

Though a large gathering of Dalit-Bahujans was fully expected at Bhima Koregaon, the police presence to protect the gathering was negligible. Milind Ekbote of Samast Hindu Aghadi and Sambhaji Bhide of Shiv Pratishthan Hindustan led the attacks; Ekbote is a former corporator from the BJP and Bhide also is close to top BJP and Shiv Sena leaders.

On January 2, protests by Dalits against the attacks on the Bhima Koregaon gathering were held at various places in Maharashtra and Mumbai. These protests also were attacked. Shamefully, sections of the media are trying to brand the attacks as “caste clashes” and even blame the Dalit activists and Dalit assertion for “triggering” the “clashes”! Sections of the ‘godi’ (lapdog) media ran a targeted campaign against activist and newly elected MLA Jignesh Mevani accusing him of causing the violence.

A successful Maharashtra Bandh was held on January 3, in which Dalit organistions were joined by some Maratha groups and Left parties to protest the violence at Bhima Koregaon. The CPI(ML) also held countrywide protests in solidarity with the Maharashtra Bandh against the neo-Peshwai Fadnavis Government of Maharashtra.

Rally Against Attacks on Dalits and The Constitution

On 20 January, Dalit and progressive South Asian organizations in the UK braved heavy rain and bitter cold to rally in large numbers in London’s Parliament Square and march to the Indian High Commission to protest about the attacks on Dalits at Bhima Koregaon and their aftermath, the continuing incarceration of the Bhim Army’s Chandrashekhar Azad (Ravan) and the slurs on Ambedkar and attacks on the Constitution by the BJP Union Minister Anant Kumar Hegde, and to urge the President Ram Nath Kovind to speak out and bring the guilty to justice.

The demonstration was called by the Dr Ambedkar Memorial Committee of Great Britain, an umbrella group bringing together all the major Dalit organizations in Britain, and South Asia Solidarity Group. Protestors travelled from Birmingham, Coventry, Wolverhampton and elsewhere in the country to attend the demonstration. 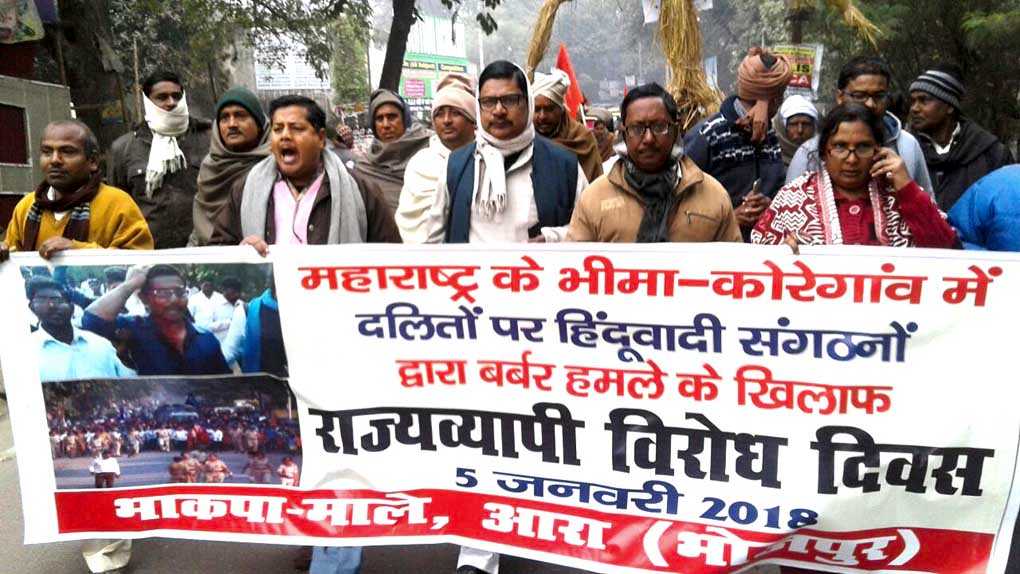 Their memorandum to the President put forward the following key demands:

‘1.Bring the men who planned the violence at Bhima-Koregaon, Sambhaji Bhide and Milind Ebute to justice, they must not be spared simply because they are Hindutva leaders and as such are members of the Hindu supremacist Sangh Parivar to which the ruling BJP belongs.

2.Release the thousands of Dalits arrested in Maharashtra in the first fortnight of January immediately, drop the charges against them and launch a transparent public inquiry into the events of January 1st and 2nd.

3. Immediately release Chandrashekhar Azad, the leader of the Bhim Army, the Uttar Pradesh based Dalit Human Rights organisation! His continued incarceration is a travesty of justice

4. We, UK’s Dalits and progressive South Asians are outraged by Union Minister Anant Kumar Hegde’s insult to Dr Ambedkar and his claim that the BJP is in government to change the Constitution. We note that neither the Prime Minister Narendra Modi, nor you, Mr President, have condemned these remarks or rebuked Anant Kumar Hegde. We urge you to do so immediately.’ 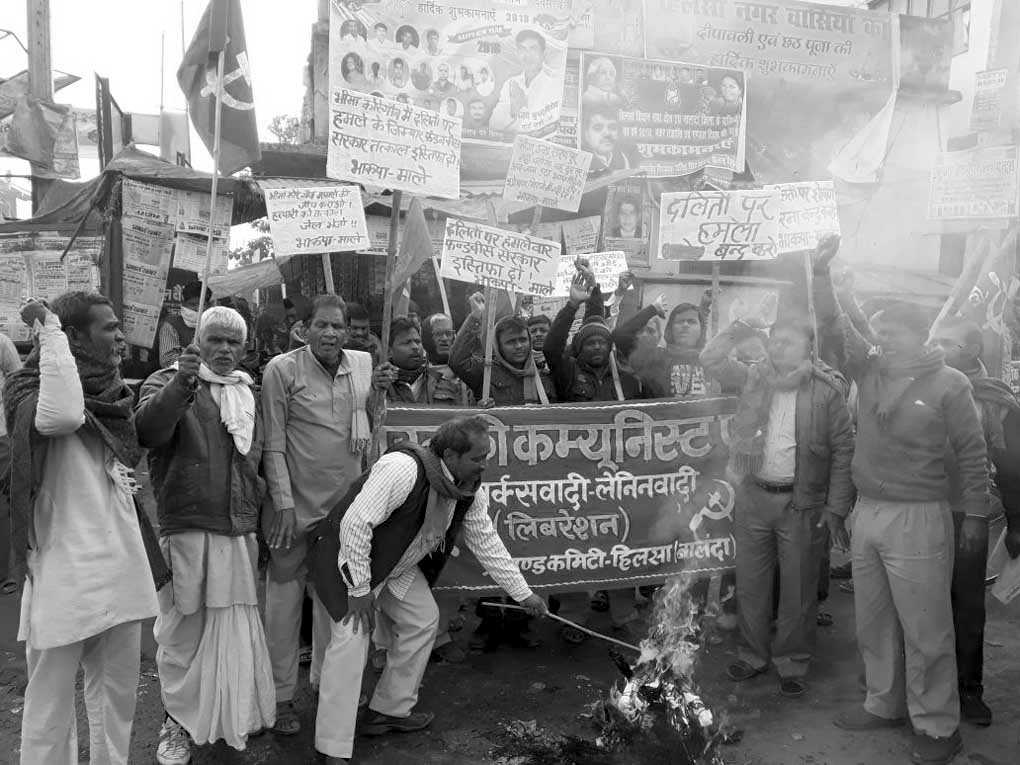 The protestors also received a message of solidarity and endorsement from Dalit leader and newly elected Gujarat MLA Jignesh Mevani, who said ‘As we all know the risk of fascism is looming large over our heads. The destruction of democracy in India is at work… the Sangh Parivar and BJP has launched an attack on Dalits and minorities, they are severely exploiting the farmers and the working class. Given the way the Bhima Koregaon violence is attributed to me, the way the perpetrators of the crimes are not arrested, the way Rohith Vemula was compelled to commit suicide, the way there is denial of justice to Rohith Vemula, Radhika Vemula, to the victims of Una, the way Bhim Army’s Chandrashekar Raavan is targeted, the way many other activists are targeted, it is very heartening to know that the Ambedkarites, progressives, left, human rights activists from UK have come together to appeal to the President of this country’. 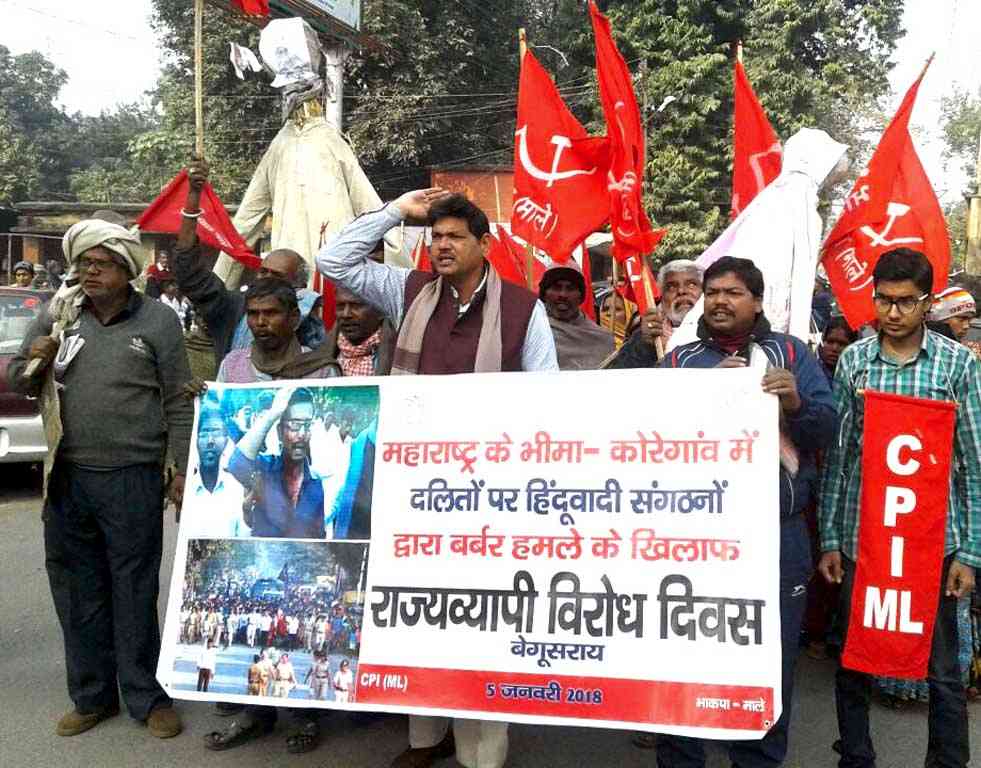 On reaching the Indian High Commission the protestors were told by officials at the High Commission, that they had ‘government orders’ not to accept the memorandum, further underlining the stifling of democracy and attempts to silence dissent. Protestors raised angry slogans of ‘shame, shame’ and ‘Indian High Commission, bahar ao!’ and promised to return on Republic Day when South Asia Solidarity Group has called a candlelight vigil ‘Stand Together Against Modi’s Violence and Hate! Say No to India’s Descent into Fascism!’, sending the message to the Modi government that the world is watching, and increasing numbers in the diaspora refuse to remain silent about escalating state-sponsored crimes against Muslims, Dalits and other minorities, the destruction of democracy and the current slide into a Hindutva brand of fascism, and are prepared to stand in solidarity with those taking to the streets in protest in India. 

A united protest was called on 3 January 2018 outside Maharashtra Sadan in Delhi against recent attacks on Dalits at the bicentenary celebrations of the Bhima-Koregaon battle and the subsequent violence that spread across Maharashtra. All India Students Association (AISA) and Jawaharlal Nehru University Students’ Union (JNUSU) also participated in organizing the protest.

A protest march was held in Dhanbad and effigies of PM Modi and Maharashtra CM Fadnavis were burnt. Students, youth and women participated in large numbers at the protest.

The CPI (ML) Jhunjhunu District Committee held a one-day dharna at the District Collector’s office against the Bhima Koregaon violence against dalits and demanded arrest and action against the culprits. 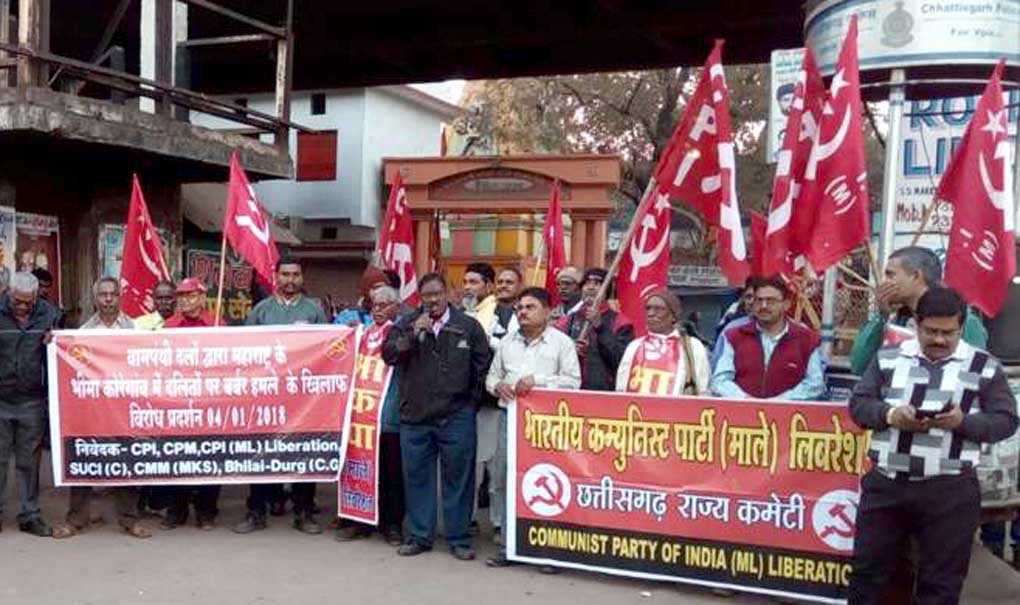