Dylann Roof is a young white supremacist who gunned down nine black worshippers after attending a Bible study class at the Emanuel African Methodist Episcopal Church in Charleston, South Carolina, United States, on 17 June 2015. The now 23 year old Roof has since been convicted of hate crimes and murder, and has been sentenced to death. He claimed that he had let off 70 rounds upon black worshippers, in a church that has long been the site of organisation around civil rights, in the hope of starting a race war. He had posted pictures earlier posing with the Confederate battle flag, an important symbol for white supremacists today. Donald Trump, of course knowingly, tried to label him crazy, well aware that it was his presidential campaign, among other things, that had given voice to white supremacists and strengthened their hands. Trump’s slogan of ‘Make America Great Again’ is openly referenced by racists who call to ‘Make America White Again’.

It is therefore important to talk about the Confederate flag and other symbols that commemorate figures who fought the Union (this refers to the 20 free states where slavery was being phased out and 5 border states where slavery was being practiced but the states had not seceded from the Union) which was under the presidentship of Abraham Lincoln, during the American Civil War between 1861 and 1865.

For those not familiar with US history, the question of the legitimacy of slavery was at the heart of this war. Seven southern states formed the Confederate States of America (to later include five more) immediately following the election of Lincoln on an anti-slavery platform, seceded from the Union, and even set up their own government, which was considered illegal by the Union. These were all slave holding agrarian states that firmly declared that slavery was essential to economic activity. The attack by the Confederates on Fort Sumter, a Union fort in Charleston, South Carolina, marks the beginning of this war, which the southern states fought tooth and nail to assert their right to own African slaves. 7,50,000 people lost their lives in this bloody war. The Confederate battle flag – and the many monuments dotting public spaces in primarily southern United States – symbolise this framework of white supremacy and are now in the midst of a serious public debate. This is because there was a tremendous effort at sanitising history and presenting the American Civil War as a pursuit of some vague notion of liberty, it was a reshaping of history to suggest that the war was not about racism and slavery, proceeding to preserve the memory of the ‘valour’ of Confederate soldiers. In fact, historians have noted that this sanitisation of history went on to recast the reconstruction efforts after the war as a form of ‘black tyranny’, thus justifying the subsequent disenfranchisement of African Americans for decades to come. Since the time Dylann Roof murdered nine churchgoing African Americans, many of these monuments have been pulled down with the understanding that memorials to individuals who fought for the continuation of barbaric social practices such as slavery should no longer have a place in a democracy.

What Happened In Charlottesville

In a ‘Unite the Right’ rally, the largest such gathering in public in recent times, white supremacists converged on Charlottesville, Virginia, a university town, to protest against the removal of the statue of Confederate General Robert E. Lee, himself a slave owner. This removal was legal, supported by city officials. On 12 August, a huge gathering of sensible and fair minded people, anti racist and anti-fascist groups and individuals was also present (the media has since called them ‘counter-protesters’) to laud the removal of the monument as well as to uphold the gains of the civil rights movement, and to say Black Lives Matter. The night before, white supremacists had held another rally through the university, shouting neo-Nazi slogans. A state of emergency was declared in the town. James Alex Fields Jr., presumed to be a member of the far right group Vanguard America (and now this group is denying that he is a member) ploughed into the crowd of anti-racist and anti-fascist protesters in his car, injuring many and killing Heather Heyer, a protester.

National outrage drew Trump out to belatedly mouth a few platitudes about making America great for everybody, but more worryingly, Trump stated that the blame was to be laid on ‘many sides’, suggesting that the far right groups were not the only ones to blame for the appalling use of violence resulting in the death of a peaceful protester in a public place. It is no surprise that among the first to congratulate Trump was David Duke, a former leader of the Ku Klux Klan, a white supremacist terrorist group (that was formed sometime between December 1865 and early 1866 by a group of Confederate generals, and has had a long and extremely bloody record of murders of civil rights activists and scores of African Americans). ‘Thank you President for your honesty and courage to tell the truth’, Duke tweeted.

Why We Should Worry

What happened in Charlottesville should come as no surprise for anyone who has followed the outpouring of support from far right groups in the United States during Trump’s election campaign. Since his election, instances of open violence against African Americans and immigrants have grown. It is important to note that the rallies such as the Unite the Right rally have become more frequent and are making an aggressive show of strength – what till recently appeared to be an army of trolls in cyberspace are now categorically making their presence felt in the streets of cities and towns across the United States, they are more organised, are stating their violent intent on camera prior to these rallies, and are openly conducting formal recruitment drives even on campuses. In fact, they clearly state their goals in televised interviews with journalists: for instance, Christopher Barker, the ‘Imperial Wizard’ of the Royal White Knights branch of the North Carolina KKK, said to Ilia Caldéron, an Afro-Latina journalist who went to interview him and happened to be the first black person to ever set foot on his property, that he would ‘burn’ her out. When she asked him how he would burn out the 11 million unauthorized immigrants in the country, he calmly replied, ‘Don’t matter … we killed six million Jews the last time. Eleven million is nothing’. And these men roam free. These ‘innernational’ terrorists see themselves as being supported by Trump’s government – after all, the travel ban was the first thing he did. Trump had on his team the anti-Semite and white nationalist Steve Bannon, who had famously refused to send his daughters to school ‘with Jews’ (he has since quit, and in his own words, is now totally free to be ‘Bannon the Barbarian’ and continue his neo-fascist propaganda on Breitbart News, a platform for the ‘alt-right’, which has also aligned itself with European populist right wing groups and where he was Executive Chair before joining Trump’s team). Trump’s team also has Sebastian Gorka, son of Hungarian parents and the Deputy Assistant to the President, has ties to the neo-fascist Hungarian Guard, which has been banned in the EU, and was seen wearing his grandfather’s medal of the Order of Vitez, which the US government had recognised as being under control of the Nazi government before the end of the second World War.

In an incredibly twisted move, the Trump administration is now going to investigate universities with affirmative action policies for cases of racial discrimination – wait a second – discrimination against white candidates, if you please! Public memory has also not forgotten that Trump himself spent $85,000 to run full page ads demanding the death penalty for five black and hispanic minors named as suspects in the brutal rape of and assault on a young woman jogging in Central Park in 1989. Their convictions were overturned after they were found innocent of the crime, but had served many years in prison. His newspaper ads are believed to have fomented racial tension, and poisoned public opinion along racial lines. And he has never apologised for the lasting damage caused even personally to those held as suspects. He is now known to have publicly mocked the differently-abled, called Mexicans ‘rapists’, promising to deport all illegal immigrants. This is quite apart from a vast spectrum of policies in just the first hundred days of his Presidency that endorse Islamophobia, sexism, as well as racism. Closer scrutiny of a long list of individuals in the President’s team will reveal that policy from the White House is now quite clearly dictated by the framework of white nationalism. Oh, and don’t forget the “impenetrable, physical, tall, powerful, beautiful, southern border wall” that Trump wants built at Mexican expense between the US and Mexico!

And Why There Is Hope 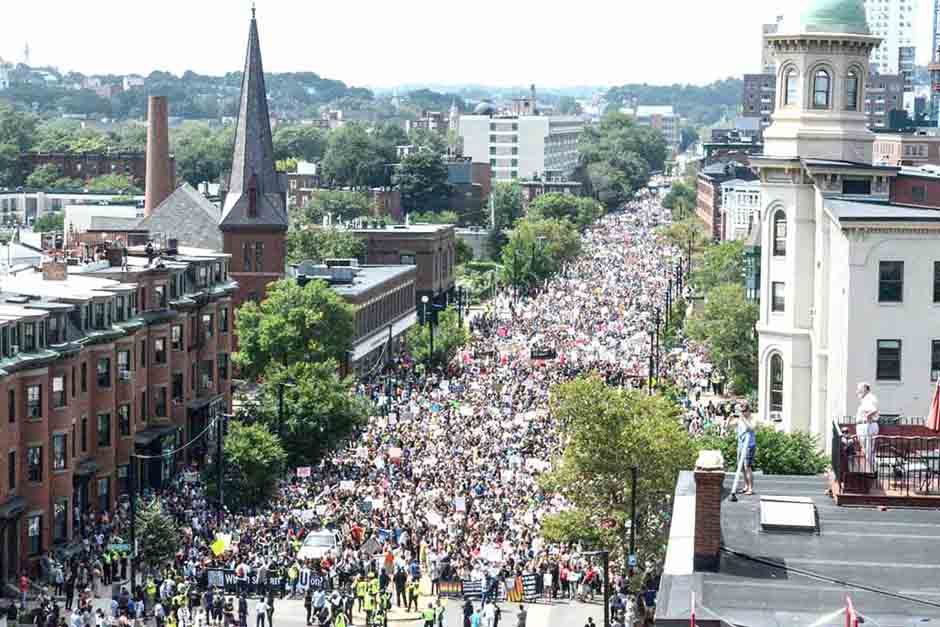 Many of us watching the dark circus of Trump’s presidency, the fascist politics of an emboldened right, and not just in the United States, are dealing with growing fear, a sense of alarm, and of history repeating itself. Closer home in India, it is not just individual politicians, political parties, and right wing groups that are presenting us the spectre of a brand new fascism: the person willing to be part of a lynch mob on the street or train, the bureaucrat, the man of the law, or head of an educational institution are its frightening face. Our students are being profiled as criminals, our minorities continue to be murdered by faceless mobs, young women who choose their partners are being unconstitutionally condemned into paternal custody with the collusion of Courts, textbooks are being rewritten to propagate blatant falsehoods.

We feel sick with anxiety that our imagination and our tenacity will desert us because we are all fighting on so many different fronts. And yet, one of the most hopeful images we have witnessed in the last few days has been that of the wonderful, lively, peaceful, and practically unending march in Boston as a response to the call to a ‘Free Speech rally’ given by a loose group of right wing youth, just a week after Charlottesville.

There were over forty thousand determined Bostonians, and less than a hundred people from the fascist ‘alt-right’. There was peace, nobody died. Given how few of the white supremacists were there, this is hardly surprising. This march is such a delightful ray of hope because, first, civil society has shown that no matter how much cleansing, sanitisation, or falsification of history books is carried out, truth will be witnessed and upheld. In this case, the peaceful Boston march tells us that civil society has not fallen prey to the conservative argument that confederate monuments are being removed because black people feel bad, and that they should stay because whatever they signify, they are part of American ‘heritage’. These marchers are saying that a modern democracy and civilised society has absolutely no use for monuments to slavery and racism, that they are offensive not just to African Americans, but to the very idea of democracy. More importantly, it shows that the simple principle of the will to love, peace, and dignity for all can be the kryptonite of the fascist right. 