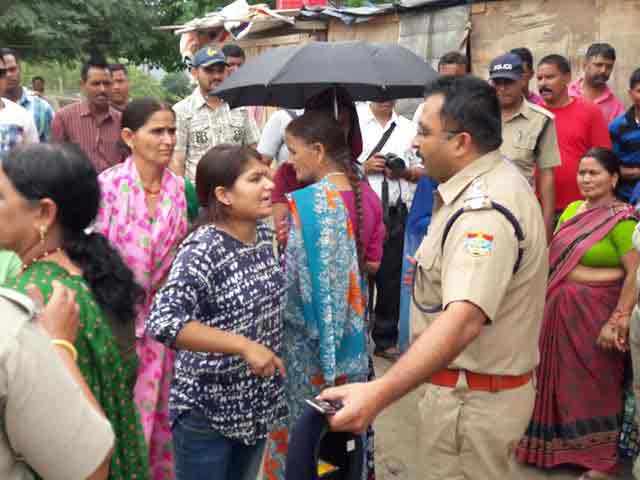 A tug-of-war for the post of CM has always been the tradition of Uttarakhand, be it a Congress government or a BJP government. This time, Trivendra Singh Rawat with his Sangh background emerged victorious. He had earlier been Agriculture Minister in the 2007-12 BJP government and was implicated in the dhaincha seed (used for fodder) scam. He was also the Jharkhand party in-charge of the BJP. The other contenders for the post of CM were Congress defector Satpal Maharaj and former Minister Prakash Pant. The contest for the post of CM lasted many days.

Just before the swearing-in of the new government a big scam came to light in the acquisition of lands for NH-74. In Udhamsingh Nagar district officials changed the ‘land use’ of lands for acquisition for the national highway and gave huge compensations to many people. A preliminary enquiry estimates this to be a Rs 400 crore scam. On the basis of the Kumaon Commissioner’s probe, 4 SDMs, 4 Tehsildars, 18 Patwaris (revenue inspectors) and 8 Kanungos (who supervise the Patwaris) have been suspended so far in this matter. Soon after coming to power Trivendra Rawat announced a CBI enquiry into the NH scam but even after the State government sent 3 letters the CBI has not started its enquiry.

Meanwhile, a letter from Union Road Transport Minister Nitin Gadkari punctured the Trivendra government’s claims of zero tolerance against corruption. In his letter Nitin Gadkari has expressed grave concern at the registration of FIR and recommendation of CBI enquiry in this matter. He called this an action which would negatively affect the morale of officials. Gadkari wrote, almost threatened, that in such a situation he would be forced to reconsider the usefulness of the projects allotted to the State. He also wrote that he expected the State to take remedial measures. After a furore in the Assembly Budget session CM Trivendra once again repeated that a CBI enquiry would be held. But so far there has been no sign whatsoever of any CBI enquiry. As for the BJP’s slogan of zero tolerance against corruption, the only thing that is zero so far in this scam is ‘enquiry’, and what will be left against corruption is only ‘tolerance’!

Along with claims of fighting corruption, the BJP had also promised the Government Employees Transfer Act and the ant-corruption Lokayukt Act. But on coming to power they were seen dragging their feet on this. Both these Bills were handed over to the Select Committee of the Assembly but the Select Committee has not yet been even constituted! Since then another Assembly Session has passed. But the Transfer Act and Lokayukt Act are still waiting in the wings to be enacted into law.

Before the announcement of the Assembly election, PM Narendra Modi held a big rally in Dehradun in December 2016 where he announced, for the unemployed youth of the State, that if the BJP came to power in Uttarakhand interviews for Class III and IV jobs would be ended. However, after the BJP came to power in the State it looks as if the jobs themselves are being ended! In the education department the government has ended regular posts and taken a decision to appoint people only on a contract basis. In basic education alone, preparations are on to end more than 4,000 posts.

The Minister for Primary and Middle Education Arvind Pandey has stated that the quality of education would improve through the appointment of teachers on a contract basis. He also said that this would end the problem of teachers protesting for every small issue. Arvind Pandey, who sees teachers’ protests as a ‘problem’, has a violent track-record and has admitted in his election affidavit that there are 11 criminal cases against him, including serious crimes like murder, robbery, and incitement to riot. For such a man to be appointed Education Minister signals a grave crisis for democracy as well as education.

Let us look at examples of how the BJP government and CM Trivendra Rawat are running away from their responsibilities. The health care system in the State’s hill areas is itself in dire need of treatment! Most places have hospitals but there are no doctors in these hospitals. Instead of arranging for doctors in these hospitals the Trivendra government has chosen to wash its hands of this responsibility. The government has announced the handing over of the Srinagar (Garhwal) and Almora Medical Colleges to the Army. This is being touted as an achievement of the State government. The question is, if the government will not even discharge its basic duty of providing medical treatment, what is the utility of such a government?

The Trivendra government is seen to be doing only one task with great alacrity. And that task is: to open liquor shops in the State. On 31 March 2017 the Supreme Court issued directives fixing the distance of liquor shops from National and State Highways. After this SC directive the anti-liquor struggle in Uttarakhand is at its peak. Women, students, youth, and other people are holding anti-liquor protests at various places. But the Trivendra government is hell-bent on starting liquor shops. The government is trying to open liquor shops forcibly, even registering cases against anti-liquor protesters at any places. The BJP is wreaking havoc across the country in the name of cow protection but in Srinagar (Garhwal) directives have been issued to remove the Gaushala called Gautirth Ashram because a liquor shop is to be opened there. In Gauchar, Chamoli district, a liquor shop has been opened in front of the Saraswati Shishu Mandir run by the RSS Vidya Bharati. According to a verdict of the Uttarakhand High Court, Nainital in November 2016, there was to be total prohibition in 4 districts (Chamoli, Rudraprayag, Uttarkashi and Haridwar) from March 2017 onwards. As soon as it came to power, the BJP government got a stay from the Supreme Court on this Nainital HC verdict.

Similarly, the Uttarakhand government has gone to the Supreme Court to get relief in the matter of distance of liquor shops from highways. In his devotion to liquor Trivendra Rawat is following in the footsteps of his predecessor Harish Rawat. In the Harish Rawat regime the government was so indulgent to a liquor brand named Dennis that other brands went to the Nainital High Court, where senior Congress leader P Chidambaram argued their case against the State government led by his own Party. The BJP’s love for liquor is also nothing new. During its previous government Sukhdev Singh Namdhari was the Chairman of the Minorities Commission. Namdhari is currently in jail on the charge of murdering liquor and real estate Mafioso Ponty Chaddha.

The BJP Government in its first three months has distinguished itself as a government that outsources the responsibility of running hospitals and then goes to any limits to open and run liquor shops! 