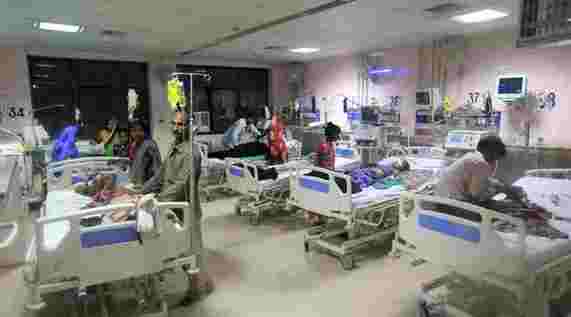 CPI(ML) has accused that the report of the Chief Secretary on the deaths of children in Gorakhpur due to lack of oxygen which was handed to the CM on 22 August attempts to hide facts. The party has demanded the resignation of the UP CM Yogi holding him responsible for the case.

A CPI(ML) fact finding team released its report on 23 August which said that the Yogi government and the senior officials of the health and the medical department are responsible for the deaths of the children however, to save themselves they are trying to fix the blame on some doctors and babus of the BRD medical college. The party has asked the government to provide answers to 11 questions and make public the reports prepared by the Chief Secretary, the investigation committee constituted by the DM and the report prepared by the expert team that came from Delhi.

The CPI (ML) team had visited the BRD Medical College on 13 August. They also met the families of the children who had died on 10,11 and 12 August. The key findings in the report are shared below:

3. The proposals for expansion of the Neonatal ICU and Paediatric ICU were submitted to the Union Minister of State for Health, Anupriya Patel so that given the high number of children, they are provided with proper medical facilities. However, the central government has not accepted them till now because of which the death toll increased. The clear responsibility for this is of the state and the central government.

4. Despite the CM visiting the medical college as many as two times in one month to have meetings, if the payment to the oxygen supplying firm were still not made and necessary equipment and facilities were still not being provided in the children’s ward, who should be held responsible if not the CM, health ministers and medical education minister. What was happening in those meetings if none of these steps were taken?

5. The fact finding team found that while 34 children did lose their lives on 11 and 12 August, even 18 adult patients had died in the ward number 14 due to lack of oxygen. This fact is being hidden even now. It is possible that patients may have also lost lives in the trauma centre and other wards too due to lack of oxygen. The fact finding team demands that details of all the patients admitted in various wards till August 15, and the list of patients of died in this period be made public so that the truth can come out.

6. The government claims that even though the supply of liquid oxygen was stopped, it had adequate cylinders and no patient lost life because of lack of oxygen. However, after the fact finding studied in detail the media reports during that period and talked to the reporters covering this, they came to know that after half the night had passed, the oxygen supply to ward numbers 12 and 14 that had 54 beds each was completely stopped. The family members of the patients were provided with manual resuscitator (Ambu bag) – a sub-optimal measure for such patients – so that they could provide oxygen to the patients. Parents of some of the children who had died shared that they tried to provide oxygen using these bags for nearly 5 hours. If there was no lack of oxygen then why was this task assigned to the families of the patients. This exposes the lie being peddled by the state government.

7. The fact finding team found that ACs in ward no. 14 and the general paediatric ward in the first floor of the encephalitis ward, were not working and the patients were forced to bear excessive heat. This was the situation three days after the tragedies on 13 August, when the CM was himself to come for the visit. Dirty water was entering ward no. 12 because the sewer was overflowing as it had not been cleaned.

8. The operators operating the oxygen plant had informed the medical college principal and other responsible staff at 11.20 am on August 10, after taking the reading on the oxygen availability that oxygen is soon likely to fall short. However, no arrangements were made. The Commissioner and the DM also showed no active initiatives in this process because of which this tragedy happened.

9. If there was no shortage of oxygen supply on the night of August 10, then why were vehicles and jawans requested from Seema Suraksha Bal on the morning of August 11 and why was their help taken to get oxygen cylinders from Khalilabad?

10. The fact finding team demands a judicial investigation of this case and also that all the records of the Medical College be immediately seized since reports are being received of tampering with them to hide the fact of shortage of oxygen supply.

11. The CM, Health Minister, Minister of Medical Education, Chief secretary-health, Chief Secretary- Medical Education, Gorakhpur’s Commissioner, DM, CMO, and Principal of the BRD Medical College are directly responsible for the death of the children as they delayed in releasing necessary budget and because they refused to act even when they had prior information. All of them should be removed from their posts and charged of murder should be filed against them.