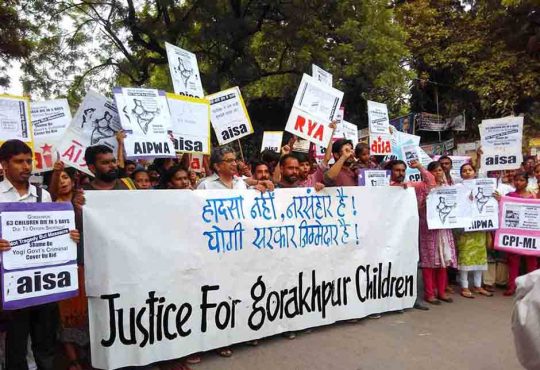 In the still eyes of Gorakhpur’s dead babies, we can see a question, an accusation – can Modi and Yogi face it? That question is: Why is hate-mongering a political priority – over and above the health of children? Why are cows, temple, Vande Mataram, love jehad the priority – not health and hospitals?

But the deaths of Gorakhpur’s children was no act of God, nor an accident. The blame for those deaths does not rest with the doctors of the Baba Raghav Das Medical College. It rests squarely and directly with the Chief Minister.

Records of the state’s medical education department, accessed by The Telegraph, show that Rajiv Mishra, principal of the Baba Raghav Das Medical College, wrote no less than 10 letters to the director-general of the medical and health department as well as the Medical Education Minister Ashutosh Tandon and Health Minister Siddharth Nath Singh between March 22 and July 18, begging for the dues of the oxygen vendor to be paid and warning that oxygen supplies would be jeopardized if the dues were not paid. He received no response. So the Yogi Government is lying when it claims that it came to know of the oxygen crisis only on August 4.

On August 1, Mishra again sent a letter with a copy marked to the Medical Education Minister Tandon. On August 5, Tandon ordered Rs 2 crore transferred to the Gorakhpur treasury towards the payment of the dues – but the money reportedly took several days to reach the treasury. Meanwhile the oxygen vendor submitted a letter directly to Tandon on August 9, after which Tandon and Yogi Adityanath reportedly held a review meeting themselves in the hospital the same afternoon. So Adityanath himself was personally informed and made aware of the problem – but he left the hospital and the vendor’s dues still remained unpaid. The same evening, the vendor stopped its supplies to the hospital. 23 babies die – but Adityanath lies, claiming he had been unaware of oxygen crisis due to delayed payment of dues. Appallingly, the dues were only paid – that too not fully – on August 11.

The Government then gave a series of contradictory explanations. The principal Rajiv Mishra was suspended for the delayed payment of oxygen dues, but at the same time the Government denied that disruption of oxygen supply had anything to do with the children’s deaths. The Government claimed that the number of deaths was normal, at the same time Adityanath blamed the deaths on poor cleanliness and sanitation – forgetting that as MP of Gorakhpur since 1998 and as CM, surely a ‘Swacch’ (clean) Gorakhpur is his own responsibility?

Dr Kafeel Khan – who reportedly tried to save children’s lives by arranging oxygen at his own personal initiative, paying out of his own pocket – has become the Muslim scapegoat whom the BJP and RSS troll army is demonizing for the children’s deaths. As someone rightly observed, in a fair world, Yogi would lose his job for the babies’ deaths and Kafeel would be a hero, but now the opposite is happening.

His Government ordered the monitoring of madarsas all over UP to make sure Muslim children were passing patriotism tests set by the BJP and RSS. One wonders if the mothers of Gorakhpur’s dead babies would also be branded unpatriotic if they failed to chant ‘Hail To Mother India’? 