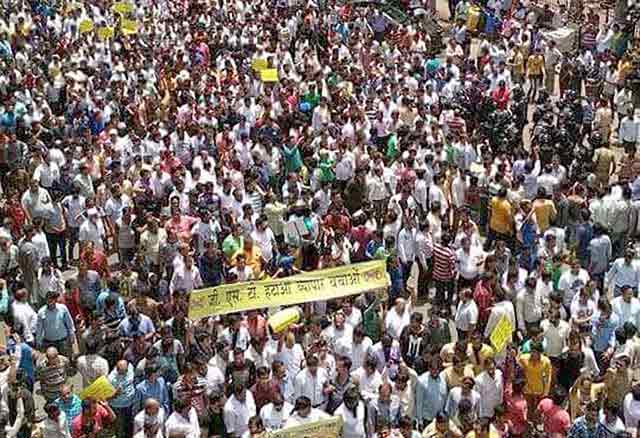 The much-trumpeted Goods and Services Tax has come into effect since July 1. It has been on the anvil for more than a decade. In that sense it stands in total contrast to demonetization where ‘secrecy’ and ‘surprise’ (of course only for the common people and not for the well-connected insiders) were supposedly central to the whole exercise. Yet there is as much confusion and lack of preparation surrounding the GST as was witnessed during the early stage of demonetization. The government is however least bothered about the lack of preparation or infrastructural compliance, it celebrated the launch of the GST with a midnight ceremony at the central hall of Parliament, the last time such a thing had happened was when India had attained Independence on 15 August 1947. Adoption of a tax policy is hyped up as a ‘moment of freedom’ for a republic which is reeling under daily incidence of mob lynching by groups of cow terrorists who enjoy full patronage and impunity from the ruling dispensation.

The celebration is however confined to the establishment. The society at large has greeted the new policy with wide-ranging protests. Small shopkeepers and traders and small producers in the textile sector who all are apprehensive of being adversely affected have been in the forefront of these protests across the country. The consuming public who are being sought to be misled with hopes of a possible decrease in prices but who will have to bear the entire brunt of increased taxation under GST will perhaps need more experience and awareness to realise the impact of GST on their immediate conditions. Like demonetization, GST too has attracted the attention of the entire country to our current economic reality and we must boldly intervene in this discourse and raise a powerful voice against economic inequality and for people’s welfare.

The GST is being billed as the biggest tax reform of independent India. India surely needs more tax revenue to fund development projects and ensure a better deal for the poor and the deprived. We all know that ever since the policies of economic liberalisation and privatisation were adopted in 1991, economic inequality has been growing rapidly. The richest 1% Indians now hold close to 60% of India’s wealth. The top 57 billionaires have the same wealth as the bottom 70% population of the country. But if we look at the structure of India’s tax revenue the proportion of direct taxes (taxes on the rich and salaried classes) is steadily declining with indirect taxes (taxes on goods and services, in which the poor and lower-middle classes have to share a disproportionately heavy burden because of their sheer numbers) growing much faster than direct taxes. In 2009-10 direct taxes accounted for a tad above 60% of the total tax collections, by 2016-17 the share however fell below 52%.

The biggest tax reform of Independent India must have addressed this issue of growing inequality and increased the share of direct taxes by levying higher taxes on the super rich and the corporations, by taxing not just income but also wealth and inheritance. Yet, the biggest tax reform has not touched the direct taxes, and has instead focused entirely on the indirect taxes. In the name of ‘one nation, one market, one tax’ the government has clubbed a number of erstwhile indirect taxes together under the omnibus banner of GST. What the GST has clearly done is centralisation –while the states get their share in GST, they lose their power of levying taxes. And the GST is quiet about the third tier in the system of devolution and decentralisation – the panchayati raj and the urban local bodies including the corporations in metropolitan cities.

Another thing GST has achieved which has not attracted much attention is privatisation of tax administration. Every taxable transaction will be tracked by a private organisation called the GST Network, in which private banking firms hold the majority (51%) share, with the central and state governments accounting for the remaining 49% stake. But the claim of simplification of tax system (Modi called it a ‘good and simple’ tax) or introduction of one tax is completely misplaced. As it is, the GST has five slabs (0%, 5%, 12%, 18% and 28%). At the last moment the GST council headed by the Finance Minister declared a special rate of 0.25% on rough precious and semi-precious stones and 3% on gold. But petroleum products, alcohol and electricity remain outside the ambit of GST. So these will continue to attract variable taxes in different states, way above the highest GST slab of 28% especially in the case of petrol and diesel.

The Thirteenth Finance Commission (2009) had recommended a single rate of 12% for GST, but most of the items being taxed under GST will attract a much higher rate. While 7% items come under the exempted list, 14% fall in the 5% slab and 17% in the 12% tax slab, 62% items will attract either 18% or 28% taxes (43% in the 18% slab and 19% in 28%). Most articles of mass consumption (from babyfood and processed food to products of personal hygiene) will be taxed at 18%. So we will have 3% tax for gold but 18% for biscuits while luxury cars which used to attract 40% taxes will now be cheapened as the tax rate is capped at 28%. Most of the service taxes will also see a steep increase from 10-12% earlier to 18%. Just as equalisation of freight tariff had adversely affected the pace and prospect of industrialisation in mineral rich eastern India, the equalisation of tax will also reinforce the existing regional disparities in development.

In short, the backward regions, small producers/traders and low-income consumers will find themselves at the receiving end of GST. Will it result in anything good for the country or the economy as a whole? Arun Jaitley says it will increase the GDP. In May, Revenue Secretary Hasmukh Adhia had predicted this increase to be as high as 4%. But senior economist and NITI Aayog member Bibek Debroy has termed all such talks ‘utter rubbish’. He has also deflated the GST balloon by pointing out that there are only 6 or 7 countries in the world that follow GST (all other countries have VAT or value-added tax), and barring Canada all these are unitary countries which are not relevant models for a federal country like India. Indeed, a comparison with GST rates in other countries will show that the tax rate does not go beyond 15 to 20% and the threshold for GST applicability is much higher (in India it is 20 lakhs, but for NE states it is only 10 lakhs).

Given the multiplicity of rates and the vast scale of applicability, it is highly likely that GST will spin a new web of corruption and subject the small sector to the arbitrary and bureaucratic manipulations of a resurrected inspector raj. Like the promised Achchhe Din and the disastrous demonetization (which is now being blamed by most analysts for the severity of the current agrarian crisis), this Good and Simple Tax is also likely to unfold as yet another recipe for increased inequality and deeper economic crisis. 

The imposition of GST has been greeted by massive protests by the small traders and labourers whose livelihood it is threatening to destroy. The most massive protests have been by Surat textile traders who incurred a loss of over Rs 5000 crore in 22 days since GST was imposed. On July 8, the 23rd day of the strike, Surat traders held a massive silent march in which more than a lakh people participated.