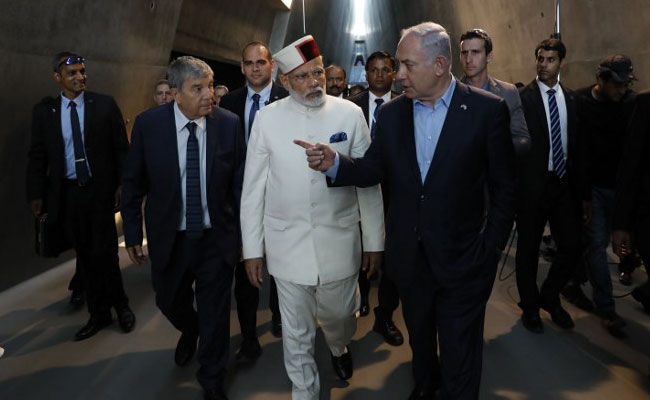 “I have to take care of interests of India. I need more water. Clean water. Where will I get it? Ramallah? No”: This is what Indian Prime Minister Narendra Modi told Israeli Prime Minister Benjamin Netanyahu on his recent visit to Israel. Netanyahu let slip this detail to reporters accidentally, because of a mic that inadvertently remained open. Modi, on his visit to Israel, made a conspicuous break with India’s long-standing foreign policy by failing to visit Palestine or to affirm India’s stance in support of a two-state solution.

Modi’s remark as reported by Netanyahu reeks of disrespect and contempt for Palestine. But the remark also reveals a breath taking disregard for facts and ethics. Israel is able to ‘give India clean water’ because Israel controls water resources in Palestinian territories that it illegally occupies. India, with its own history of fighting colonial occupation and colonial exploitation of its resources, has especially solid grounds for solidarity with Palestine.

After 25 long years of a somewhat complicated diplomatic relationship with Israel, we now have a dubious milestone in the history of India’s foreign policy. For the first time ever, an Indian Prime Minister has visited the state of Israel. The mainstream Indian media is busy cheerleading the Modi and Netanyahu government’s official line – that India and Israel have ‘shared values’, that this relationship was ‘made in heaven’.

For years, the Indian government and others across the world recognised the plight and the aspirations of the people of Palestine. The official position of various governments apart, democratic opinion recognised Israel’s role in the Middle East for exactly what it was: that of a racist, genocidal, colonial settler state. For years, Israel has illegally occupied Palestinian land, it has refused to stick even to UN-mandated borders allotted to it (which in itself is based on a horrifically unjust and undemocratic premise), it has violated a host of international resolutions, it has routinely humiliated, killed and ruthlessly supressed Palestinians.

In a recent (and remarkably candid) statement published in the Israeli paper Ha’aretz, Israel’s own President Reuven Rivlin said that the new laws being envisaged to make settlement in the Occupied Territories in Palestine even easier make Israel “look like an apartheid State.” Israel’s role is so unambiguous and crystal clear that even former US Secretary of State (and a long-term supporter of Israel) John Kerry has gone on record to say that Israel would have to choose “between being a Jewish state and being a democracy”. And we have a shameful situation in India where the entire Indian establishment (and mainstream media) is unabashedly celebrating an Indian Prime Minister’s visit to this Apartheid State! For long, India’s official policy was this: as long as Israel violated international resolutions and continued to illegally occupy Palestinian land, India would continue to support Palestinian aspirations. With this recent visit, Modi and the RSS-BJP have sought to transform this long-standing democratic principle.

There was no mention during the Modi-Netanyahu talks of a two-state solution (which Israel opposes), of UN resolutions on Palestine, of Palestine’s right to exist. For all the tall talk of “collaboration” in seemingly innocuous fields of agriculture, irrigation and medicine, the Indian government under Modi has in effect declared that the India-Israel is based on military ties, and definitely “shared” ideas of how to deal with “enemies”! For a long time, the Sangh ideological machinery has been openly declaring that India should learn from and replicate Israel’s occupationist, genocidal policy in Kashmir and with its neighbours.

Modi’s betrayal of Palestine and wooing of Israel comes at a time when globally, Israel is finding it harder to find support for its endlessly expansionist policies and illegal occupations on Palestinian territory. Since 2005, the BDS (Boycott, Divest, Sanction) campaign against Israeli enterprises directly implicated in the on-going occupation and human rights violations has only grown in strength.

Modi comes from a political tradition (the RSS) that openly modelled itself on the Nazi Germany and admiringly described the genocide of the Jews as German ‘race pride’ that India would do well to emulate by cleansing itself of Muslims! The relationship between the Modi regime and the genocidal Zionism that guides today’s State policy might indeed be a ‘marriage made in heaven.’ But the people of India must reaffirm solidarity with Palestine against colonial occupation.