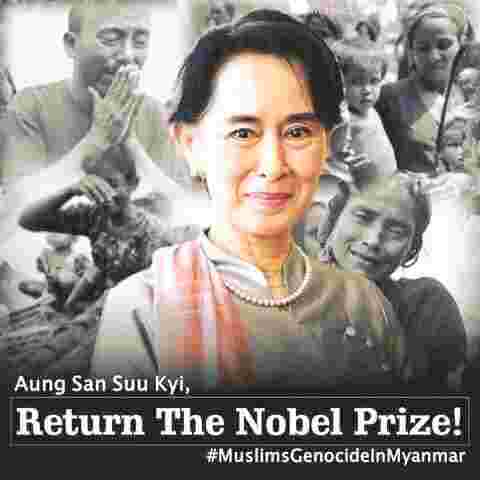 The Rohingya people of Myanmar are facing a genocide and ethnic cleansing at the hands of the Myanmar Army. The Rohingya (the majority of whom are Muslim) have lived in the Rakhine State (Arakan) in Myanmar for the past several centuries. But a racist Citizenship Law enacted by Myanmar in 1982 denies the Rohingya people citizenship by refusing to recognise the Rohingya as one of the “national races.” The Rohingya have been subjected to several rounds of genocidal violence that have forced them to flee to Bangladesh and India.

As estimated 138,000 Rohingya were internally displaced and forced to live in unofficial camps for displaced people in Myanmar by 2015. Since August 2017, a fresh round of genocidal violence has been unleashed by the Myanmar military – burning the homes of Rohingyas, raping Rohingya women and massacring people. It is estimated that some 90000 Rohingya people have fled Myanmar to Bangladesh due to this violence.

The Myanmar leader Aung San Suu Kyi is complicit in the communal and racial genocide of the Rohingya people. The Myanmar Government is now blocking UN supplies of vital aid in the form of food, water, and medicines to desperate Rohingyas in rural areas of Myanmar. By shamefully denying that the Rohingyas are facing persecution and refusing to consider amending the Citizenship Law that denies the Rohingya citizenship, Suu Kyi’s claim to be an internationally acclaimed human rights defender stands exposed and irrevocably tarnished.

The Bangladesh government plans to relocate the Rohingya refugees to a flood-prone silt island, Thengar Char, which only surfaced eight years ago and is unsafe and uninhabitable.

Some 40,000 Rohingya people are refugees in India – where they are increasingly being subjected to communal violence and massacre threats. In April 2017, the Chamber of Commerce and Industry of Jammu threatened to “identify and kill” Rohingya refugees in Jammu unless they were deported. Just days ago, in Faridabad, Rohingya men and women of 40 Rohingya families living in a jhuggi cluster and eking out a living as rag-pickers, were beaten up by a communal gang because they had bought two buffalo calves for the Eid sacrifice.

In this backdrop, the directive by India’s Home Ministry to all states that Rohingyas be identified, rounded up and deported to Myanmar is unconscionable. India’s Minister of State for Home, Kiren Rijiju, has claimed that India’s plan to deport the Rohingyas is justified since India is not a signatory to the United Nations Convention on Refugees, and therefore India is not bound to recognise the refugee status granted by the UN High Commissioner for Refugees to the Rohingyas. But the Indian Government must be reminded that India is bound by the principle of non-refoulement which has time and again been upheld by the Supreme Court of India – which means that refugees must not be deported back if they face danger to their lives in their home country.

India’s own Standard Operating Procedure also allows for India to grant legal status to people escaping religious persecution in other states, and specifically states that such people would be protected from deportation.

Deportation would mean a death sentence for the Rohingya refugees. The Modi Government’s refusal to recognise the Rohingya as refugees fleeing communal persecution, and its insistence instead on profiling them as breeding ground for terrorism, is consistent with its communal politics.

The Modi Government is on the one hand seeking to amend India’s citizenship laws to allow for Indian citizenship to be granted to refugees from amongst religious minorities in neighbouring Pakistan, Afghanistan, and Bangladesh – i.e non-Muslim minorities. On the other hand, Rohingyas who are Muslims and therefore a persecuted minority in Buddhist-dominated Myanmar, are being subjected to communal profiling and threatened with deportation by India. Thus, the Rohingya refugees, evicted by genocidal Buddhist nationalism and racism from Myanmar, are now being doubly victimised and discriminated at the hands of “Hindu Rashtra” politics of the Modi Government.

We demand that Myanmar amend its citizenship law, recognise the Rohingya people as citizens and end the genocide of Rohingyas without delay. We demand that the Indian Government immediately stop all plans to deport Rohingya refugees, and instead recognise Rohingyas as refugees fleeing communal persecution, and take steps to protect them from communal persecution in India.