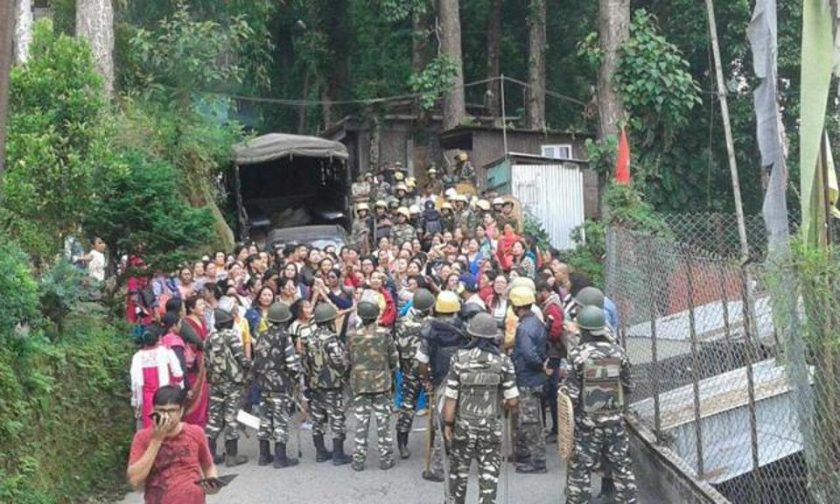 Triggers Renewed Unrest in the Hills of Darjeeling

The hills of Darjeeling are on the boil once again.

The current face-off between Gorkha Janamukti Morcha and Mamata’s West Bengal Government began with the official announcement by the latter to impose Bengali language as a compulsory subject in all schools in the state. Severely hurt by this sudden affront, appearing as a blatant show of Bengali chauvinism and branded as a cultural measure of ‘internal colonisation’, the hills rose up in militant protest. The confusion multiplied when Banerjee walked into Mirik and announced Bengali would be optional in the hills—but with the rider that it would be taught as a fourth language as to consider it a Compulsory-Additional subject.

But the tension has been simmering for quite some time. Ever since coming to power in 2011, Mamata Banerjee remained keen on showcasing the hills, claiming to have restored tranquility and peace by her brand of ‘Development’ with her ubiquitous slogan ‘The Hills are Smiling’. To etch a palpable dent on the GJMM mass base, Mamata came up with the divisive policy of making separate Development Boards for smaller ethnic groups in the hills namely, Lepchas, Sherpas, Gurungs, Tamangs, Sarkis etc etc—with a view to weaken the binding political construct called ‘Gorkhas’. With her more than periodic visits to the hills, she could win over a considerable section of the population. The Lepchas even accorded her their supreme accolade ‘Goddess of Fortune’.

Riding on her meteoric rise inpopularity, the TMC started getting fattened with increasing support from GNLF and the breakaway leaders of GJMM to put up a formidable challenge to the erstwhile monopolistic political grip of BimalGurung’s party. In the aftermath ofthe assembly polls, the TMC could prove itself the 2nd largest political configuration after GJMM. In the recently concluded civic polls, TMC won majority in the Mirik Municipality after carving out a separate Mirik Sub-Division just before the election.

Tension has also been growing over the slow and insincere implementation of the GTA Memorandum of Settlement (MoS) that was signed by and among the State Government, Union Government and GJMM in presence of Bengal CM and the then Union Home Minister P Chidambaram way back in 2011. Out of total 56 Govt. departments to be governed by GTA, only 35 have been handed over to GTA chief Bimal Gurung till date. On top of that, the State Government also slapped a defalcation charge amounting to Rs. 1,500 crore upon the CEO Bimal Gurung along with his 45 nominated GTA councilors.

Mamata has also been extremely high handed in dealing with the administrative affairs in the hills. She went ahead with the decision of carving out Kalimpong District and Mirik Sub-division from Darjeeling district without showing an iota of respect to the GTA and made it a point not to discuss any forthcoming decision pertaining to governance with its CEO Bimal Gurung. The utterances of Mamata and her ministers have also been highly insensitive and provocative. During the recent municipal elections, one of the Ministers of State of Mamata Government, Indranil Sen, in his election campaign speech publicly boasted in Darjeeling that he had brought a number of boxes to capture the corrupt GJMM leaders and take their body parts back to Kolkata! Very recently, while retaliating to Bimal’s quip, Mamata challenged Gurung to prove himself a ‘Habildar’ before claiming to become the Chief Minister of the Hills! Such expressions clearly reflect the deeply entrenched Bengali chauvinistic and supremacist attitude that sees Gorkhas as ‘chowkidars’, ‘Habildars’ etc. as if belonging to a subordinate social status.

Mamata’s decision to hold a meeting of her cabinet in Darjeeling Raj Bhawan after a long gap of 45 years only added to the atmosphere of tension and unrest in the hills. When the GJMM organised a militant demonstration just outside the venue of the meeting, Mamata promptly called for army deployment. Following this she also secured a deployment of additional 10 companies of para-military forces by pleading her grounds before the Union Home Minister. This sudden collusion of interests between the TMC-led state government and the BJP-led Centre surprised GJMM to the bones as they so far trusted the BJP Governmentat the Centre to one day endorse the century-old demand for a separate state for the Gorkhas living in Indian territory.

Darjeeling has already witnessed a series of crackdowns, particularly on the top leaders of GJMM and the protesting crowd. The police indiscriminately lathicharged on a peaceful rally taken out by GJMM cadres in support of the famished tea workers’ 48-hours strike demanding legitimately the declaration of Minimum Wages, monetarised share of ration subsidies, 8 decimal home-stead land for each permanent worker in the existing labour-line and opening of closed and abandoned tea gardens. Following this, the State Government sent police force to GJMM party office at Singmari and Bimal’s residence at Paatlebas areas and ransacked both to claim salvaging bows and arrows along with bundles of currency notes from the spots. To counter this framed accusations, GJMM supremo called for a four-pronged ‘Paatlebas Chalo’ programme to register protest against such an affront. As the 4 rallies converged at Singmari area, police and para-military forces fired upon the militant crowd and 3 GJMM activists died on the spot and several others sustained bullet and tear-gas injuries on 17 June.

It seems Mamata is acting on a calculated strategy of whipping up Bengali chauvinism to counter the BJP’s communal political design in West Bengal. The BJP has been playing a highly opportunist role vis-a-vis the Gorkhaland agitation. It secured the support of the GJMM and the Gorkha people at large in 2009 and 2014 Lok Sabha elections by promising sympathetic consideration of the demand for a separate Gorkhaland state. But it has remained conspicuously silent and idle about the issues of Darjeeling whether one talks about the plight of the tea garden workers, the question of implementation of the GTA accord or the promised consideration of the Gorkhaland demand. But now it is colluding with the state government to deploy army and suppress the agitation.

The demand for a separate Gorkhaland state has been an age old demand of the hill people. It is a demand that clearly meets the cardinal criterion of statehood which is language. The creation of the GTAwas an agreed intermediate arrangement, but by subverting the implementation of the accord and systematically undermining the authority of the GTA through bureaucratic highhandedness and now with the provocative speeches and acts smacking of rank Bengali chauvinism, the TMC government in collusion with the BJP-led Centre has provided the basis for a renewed intensification of the Gorkhaland agitation. We must insist on a democratic fulfilment of the aspirations of the hill people and appeal to all to maintain harmony and avoid the vicious cycle of ethnic strife by all means. 