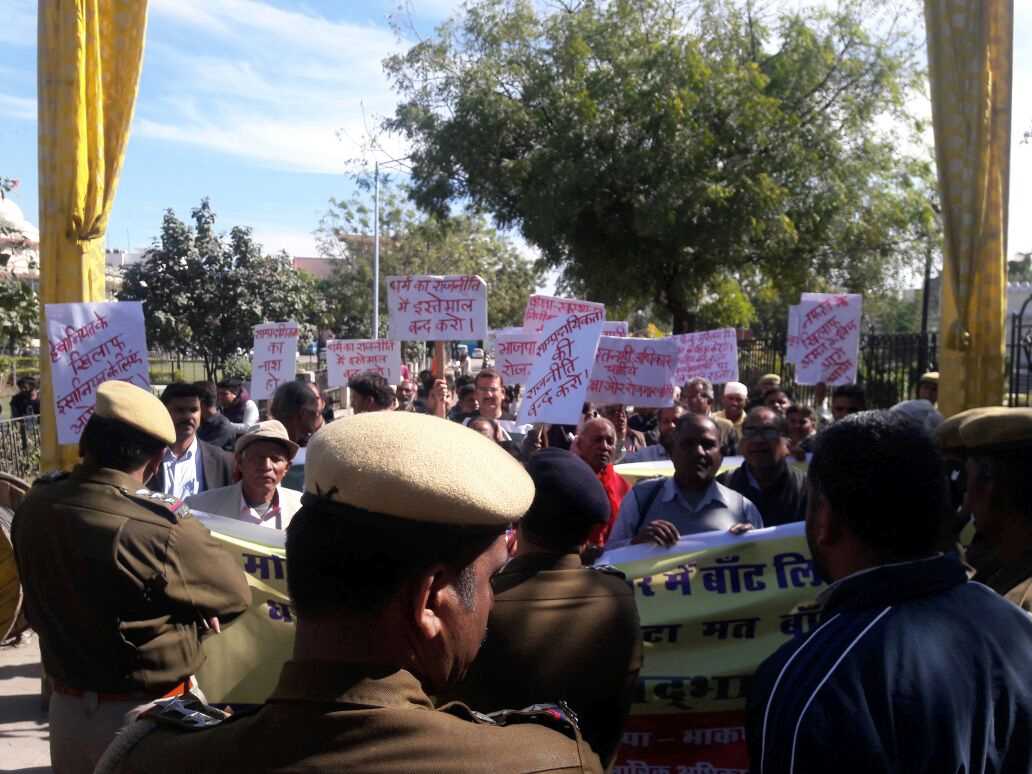 A Peace and Goodwill March to be taken out on 21 December 2017 from the Town Hall at Udaipur by Left parties, PUCL, and Loktantrik Adhikar Evam Sadbhavana Manch (Democratic Rights and Goodwill Forum) was stopped by the government and the administration due to political pressure.

A delegation from the Left parties had met the Collector and requested him not to come under political pressure and act impartially and give permission for a Peace March on 21 December to spread the message of peace, goodwill and brotherhood in Udaipur. Responding to the request, the District Collector had given permission for the march, but later the police and administration came under political pressure and put out a message on social media (which was made to go viral) saying that the march has been cancelled, so that the common people of Udaipur would not participate in this march. Despite this, about 100 activists from the Left parties, PUCL and Loktantrik Adhikar Manch assembled at the Town Hall at 11 AM to take out the march; a heavy police force then prevented the activists from starting out in a rally. The people assembled for the march were raising slogans such as ‘Bharat Maa ke Char Sipahi—Hindu Muslim Sikh Isaai’; ‘You have divided God into Mandir, Masjid, and Church, you have divided the earth and the ocean, now do not divide humanity’; ‘we do not want hatred, we want our rights, education and employment’; ‘stop intruding religion into politics’; ‘up with democracy, down with mobocracy’; ‘we shall protect peace’; ‘down with the British policy of divide and rule’; ‘down with communalism, long live our Constitution’.

Addressing the meeting held on the occasion senior journalist and socialist thinker Himmat Seth said that the Udaipur District administration failed to stop communal and anti-social elements on 14 December despite Section 144 being imposed in the city, and allowed the saffron flag instead of the tricolour to be flown on the main gate of the Udaipur Court complex, which raised serious questions about the law and the Constitution. This is proof that the Udaipur administration and police are under political pressure due to which they take no action against those spreading religious frenzy, hatred and violence but use their powers against peace-loving people.

CPI(M) District Secretary Com. Mohanlal Khokhawat said that no BJP leader has condemned the murder which occurred on 6 December or the vandalism at the Court premises by communal elements on 14 December, making it evident that the BJP Ministers and leaders are spreading frenzy, hatred and violence to further their political interests.

CPI(ML) leader Com. Saurabh Naruka said that we want to build the country on the ideology of Bhagat Singh and Ambedkar but the communal forces in power want to build a country based on the hate-filled ideology of Golwalkar and Godse which the peace-loving people of this country will never accept.

CPI City Secretary and former Councilor Com. Rajesh Singhvi said that the police and administration have acted against the Constitution and democracy by stopping the peace march today. He said that the police and administration, under political pressure, want to maintain an atmosphere of fear in the city of Udaipur because this helps to cover up all the failures of the ruling powers.