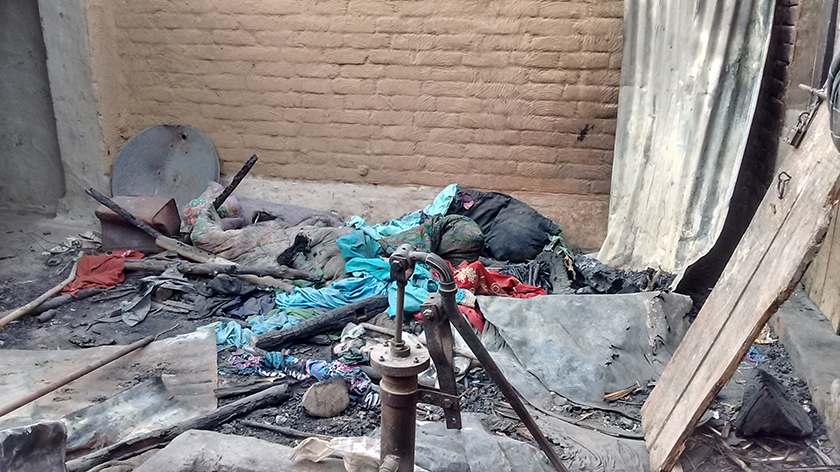 (On 5 May, Dalits in Shabbirpur village of Saharanpur district of Uttar Pradesh were attacked. A CPI(ML) team comprising comrades Afroz Alam, Bholaram Maurya, and Chunnilal visited Shabbirpur village and met the injured at the Saharanpur District Hospital after the incident. They prepared a fact-finding report on the incident. Later an AISA team comprising AISA National President Sucheta De and others also visited Shabbirpur. Below is a report by Sucheta De on the facts and implications of the Saharanpur carnage.)

For the last several years the belt of western Uttar Pradesh has been made the laboratory of the RSS-BJP’s sinister design of communal polarization and violence against Muslims. The 2013 Muzaffarnagar riots was a planned design by the RSS-BJP to polarize the belt on communal lines and reap electoral benefits. And now, after that design delivered ‘electoral success’ for the RSS and BJP, upper caste feudal forces have started celebration of their ‘victory’ by unleashing attacks on Dalits.

Within two months of Yogi Adityanath being sworn-in as the Chief Minister of UP, BJP tried to manufacture an attack on Muslims in Saharanpur on the pretext of “Ambedkar Shobha Yatra” in the month of April. BJP MP from the area Raghav Lakhanpal planned communal tension with Muslims and tried to take the BJP-mobilized Shobha Yatra through Sadak Dudhli village, an area mostly inhabited by Muslims. Notably local Dalits did not participate in the Shobha Yatra. When SSP of Saharanpur Love Kumar denied permission for the BJP mobilized Yatra to be taken through Muslim majority area, BJP supporters and activists led by Raghav Lakhanpal attacked the SSP’s house. Despite permission being denied by the SSP, the Shobha Yatra was nonetheless taken through Sadak Dudhli and a communal conflict was manufactured by BJP. Love Kumar has been subsequently transferred from Saharanpur for not facilitating BJP’s plan of a communal violence. 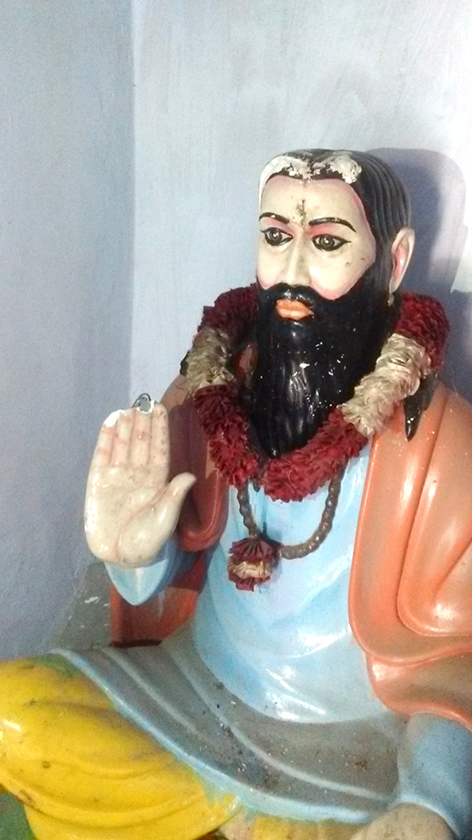 The Dalit villagers of Shabbirpur refused to be a part of RSS’s game plan of using Dalits as foot soldiers of communal polarization. The Dalit community of Shabbirpur, organised under the banner of the Bheem Army (a local organisation of Dalit youth asserting Dalits’ dignity and rights) has schooled itself politically in the vision and dream of Babasaheb Ambedkar for a casteless society devoid of feudal upper caste dominance. The Bheem Army had on several occasions intervened to prevent tension which communal forces had sought to foment between Dalits and Muslims (one occasion was in December 2016 over the Dadhuli Rangad Kabristan land, and another was over blackening of a Ravidas statue in Ghat-theda village). They are aware of their symbols of empowerment and struggles for rights. And self-reliant, confident and politically organized Dalits who refused to be co-opted in the project of Hindutva are a real threat to feudal dominance and RSS’ hegemony. Moreover, Shiv Kumar, a dalit, had won the elections to the post of village Pradhan even though it was a general seat and not a reserved one. Thus, the upper caste feudal sections who are in a celebratory mode since Yogi’s victory, had to teach the Dalits a lesson.

Attackers Shouted ‘Police and Government Are Ours’

On 14th April, the villagers of Shabbirpur wanted to install a statue of Babasaheb in the Ravidas temple located in their village. The Rajput community of the adjacent area in the village objected to this, saying there is no permission for it. On Maharana Pratap Jayanti (5th May) a gathering of the Rajput community was organized at Maharana Pratap Memorial Inter College in Shimlana, 5 km from Shabbirpur. Dalit villagers of Shabbirpur told us that the Rajputs deliberately took a procession towards Shimlana village, passing through the Dalit settlement playing loud DJ music. When the Dalits asked for permission papers to be shown for playing loud music and conducting a procession, the feudal goons from the Rajput community led by Nakli Rana, local RSS shakha sanchalak Satender Singh, and Amarpal Singh started attacking the Dalits. The Ravidas temple situated in the midst of the Dalit settlement was vandalised by upper caste goons, and the Ravidas statue was broken. The goons urinated inside the premises of the Ravidas temple – a symbol of Dalit identity – to humiliate the Dalits. They also started a fire inside the temple.

By evening, thousands of upper caste men were mobilized at Shimlana village. The villagers told us BJP leaders of Western UP like Hukum Singh, Sangeet Som and others were present at Shimlana from where the upper caste goons were mobilized. Each of these BJP leaders has a track record of manufacturing communal riots and tension in the Western UP area. The Shimlana event was thus a ruling party event, and the attack unleashed on the Dalits too was instigated by the ruling party.

The upper caste goons attacked the Dalit area of Shabbirpur village with swords in their hands. All the houses, and crop stored in front of houses were burnt. Everyone present in the area was attacked with swords. The villagers told us that the upper caste goons while attacking the Dalits shouted “sarkar hamara hai, police prashasan hamara hai” (the police and government is ours) when Dalits called the police.

When we visited the village, the area was still full of smoke coming from burnt crops. Houses were broken and burnt, villagers injured.

As the first CPI(ML) team to visit Shabbirpur had already noted, other than the one Thakur person who died in the clash, the 20 injured who were admitted in the District Hospital are all Dalits and all have received sword injuries. One of the injured Satya Kumar, who is the village Pradhan’s son, is critically injured. Other than the Chamars’ homes, houses belonging to one Valmiki family and one Dheemar family were also destroyed in the attack. No Thakur home has been destroyed. This shows that the Dalits were only acting in self-defence.

After the carnage of May 5, Dalit youth called for a meeting at the Ravidas Hostel to demand justice. The administration stopped the meeting in the name of law and order concerns. Subsequently Dalits gathered at Gandhi Park and demanded justice and compensation for the Shabbirpur carnage. The police lathi charged the peaceful gathering, which led to unrest.
Since then, the UP government has started massive crackdown on activists and leaders of Bheem Army. Bheem Army is an organization of Dalit youths in the area that works for the rights of Dalit community. Several false charges have been filed against the founder member of Bheem Army, advocate Chandrashekhar Azad. Several Dalit youth have been arrested and put behind bars in Sah 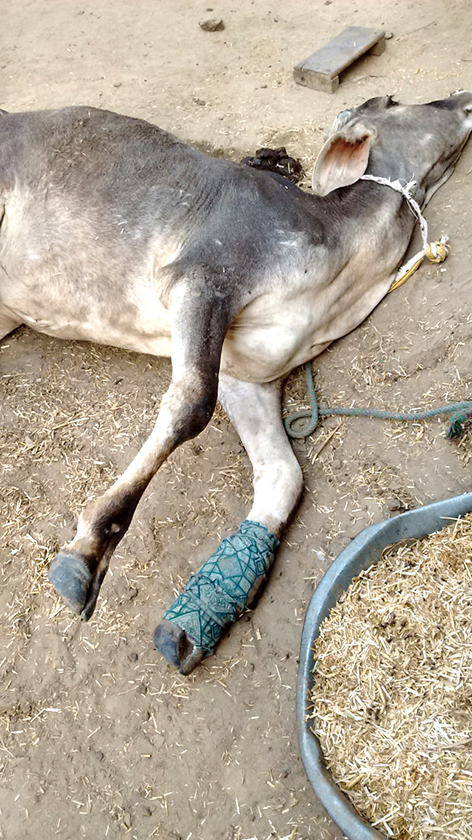 Mr. MP Singh, the SO of Badgao PS (the police station responsible for Shabbirpur) did not act to stop the carnage in spite of being called by the villagers on 5th May. After a nation-wide outrage against anti-dalit carnage in Shabbirpur, senior police officials of UP claimed that ‘Line Hazir’ order has been given for the SO. It has now come to light that such claims are contrary to the truth. Rather than ‘Line Hazir’ order being given to the SO, he has been rewarded with charge of a more important police station in the area. This is how officials who implement RSS’ game plan are rewarded.

Assured of administrative impunity, the Sangh Parivar is indulging in repeated attempts at fomenting communal and caste tensions in Saharanpur. This pattern is evident from the recent attacks on Muslims followed by the attack on Dalits. After the attack on Muslims, the Sangh Parivar mobs attacked the home and family of the former SSP Love Kumar because he acted against the rioters – and the Government transferred him. Saharanpur is in the cross hairs of the RSS and BJP because the BJP lost the Assembly seat here and in two neighbouring constituencies in the recently held Assembly polls despite its victory in the rest of the State.

“We Will Fight Back”

We visited villagers who are admitted in the hospital with serious sword-inflicted injuries. Injured in body, they were firm in resolve to fight back for dignity and justice. Activists of Bheem Army and local villagers are collecting relief and mobilising the necessary help for the villagers of Shabbirpur. Our team met several activists of Bheem Army and the family of Chandrashekhar. It is easy to see the dreams of Ambedkar, Bhagat Singh and Chandrashekhar Azad (of the freedom movement) in their eyes.

CPI(ML) in Solidarity With Dalit Assertion And Resistance in UP

The Bheem Army’s massive rally in Jantar Mantar in Delhi on 21 May 2017 is a sign of a new wave of Dalit political and social assertion and resistance to Sangh-driven violence and attempts to re-establish upper caste political dominance and hegemony under Yogi rule. This is a welcome phenomenon.
The CPI(ML) Uttar Pradesh organized a statewide protest day on 15 May against attacks on dalits in Saharanpur. Programmes were held at different places on the day including in capital Lucknow, Kanpur, Mau and other towns.
AISA and CPI(ML) also joined the Bheem Army rally at Jantar Mantar, New Delhi on 21 May 2017.