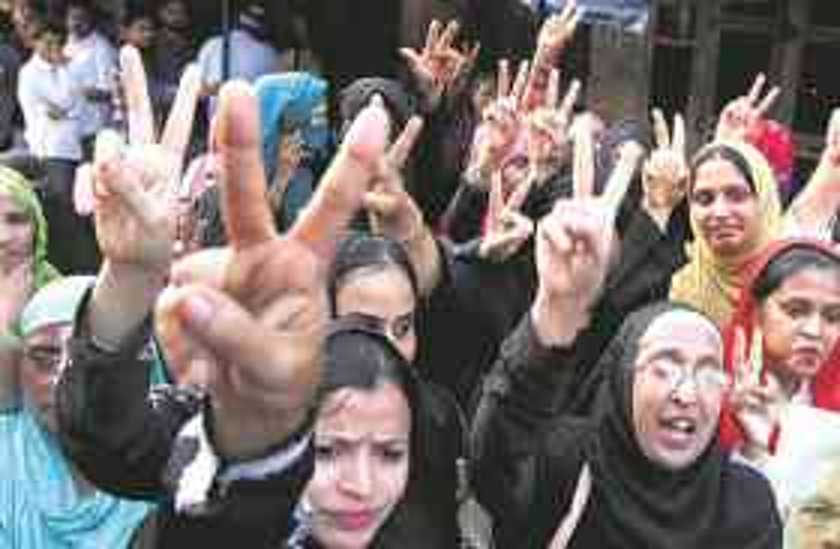 Liberation takes a look at several recent verdicts – some encouraging, some discouraging, and one downright dangerous – of the Supreme Court that have a far-reaching impact on women’s rights.

The verdict of the Supreme Court – Shayara Bano v. Union of India and Ors” WP (C) No. 118/2016 – held instant Triple Talaq in one sitting to be unconstitutional and arbitrary, as well as un-Islamic. This verdict is a victory for the Muslim women and Muslim women’s groups that have led the sustained struggle for the ban on the practice. The verdict affirms the Constitutional principles of the equality, rights, and dignity of women.

It is true that an earlier judgement – the Shamim Ara verdict of 2002 invalidated instant triple talaq, holding it to be unQuranic; the 2017 Shayara Bano judgement further holds it to be unconstitutional. The 2017 verdict is a landmark because, as Indira Jaising, one of the senior advocates who argued against instant triple talaq in the Supreme Court, observes, it affirms that marriage is a secular institution, governed by civil laws. Even if one gets married through religious rituals, the character of marriage is that of a secular, civil contract, governed by civil laws. In fact, as Ms Jaising points out, Justice Rohinton Nariman and Justice Uday Lalit in their judgement: “Marriage in Islam is a contract, and like other contracts, may under certain circumstances, be terminated. There is something astonishingly modern about this – no public declaration is a condition precedent to the validity of a Muslim marriage nor is any religious ceremony deemed absolutely essential, though they are usually carried out.” It is this modern nature of the Muslim marriage contract that has been upheld and affirmed by the SC, and by implication this holds for all Indian marriages. In his minority verdict, the Chief Justice argued that personal marriage laws are protected by the right to freedom of religion – but this position is a false one. Personal laws are simply marriage laws, not religious laws, and as Ms Jaising observes, “Whether to marry in a church, temple, court or anywhere else is a matter of choice, but that cannot determine the content of the marriage or its legal character, which will remain governed by state-made law.”

The struggles of Muslim women to abolish instant, arbitrary Triple Talaq are all the more courageous and laudable because they have been conducted in a hostile climate – where the Central Government has tried to politically appropriate their struggle for its own communal agenda, and where the rights and dignity of minorities are under an unprecedented attack in India, and where they themselves have been baselessly accused in many quarters of being part of a right-wing political agenda.

The attempts by some quarters to credit the Prime Minister Narendra Modi and his party for the verdict and paint this verdict as a victory of a communal agenda and a defeat of the Muslim community are condemnable and must be firmly rebuffed. The Muslim women’s groups that have fought and won this battle with the support of other women’s groups deserve the credit for this victory. Any attempt to use this verdict as a pretext to humiliate the minority community is condemnable – the Constitution protects the rights of women as well as the rights of minorities and other vulnerable communities, and these should not be pitted against each other.

Any attempt by the Government of India to introduce a Uniform Civil Code must be opposed. Personal laws reform should be done from the perspective of gender justice rather than uniformity. There are a wide range of patriarchal aspects in many existing personal laws pertaining to all communities, which require reform. For instance, Muslim laws of inheritance limit the right to will away one’s property, thus protecting the daughter’s right to inherit; whereas Hindu laws allow the unlimited right to will away one’s property, which is used to disinherit daughters – this calls for change. Similarly tax breaks for the Hindu Undivided Family are also discriminatory. In this regard, we reiterate that the chapter on personal law reform in the report of the latest High Level Committee on Status of Women (http://wcd.nic.in/documents/hlc-status-women) should be used to initiate a discussion with women’s movement groups to achieve a roadmap for gender-just changes.

It is significant that the majority verdict of the Supreme Court striking down the instant triple talaq law as unconstitutional prevailed rather than the minority verdict which stayed the practice of instant Triple Talaq for a period of six months and directed the Government to legislate on it. The onus of safeguarding Constitutional values and rights lies with the Courts. This task should not be outsourced to the legislature, since Constitutional rights are not a matter that should be decided by levels of popularity or political support. In Ambedkar’s words, Courts must protect Constitutional morality even if such morality is not in keeping with popular common sense morality. Likewise, it is high time the Supreme Court overturned its own judgement overturning the Delhi HC verdict on Section 377 decriminalizing homosexuality – a judgement in which the Supreme Court refused to strike down an unconstitutional law and instead tasked the legislature with taking a decision on this matter.

If the Supreme Court upheld women’s rights in the instant triple talaq case, it did just the opposite in its judgement on Section 498A. This judgement echoed the patriarchal propaganda that this law is “misused” by women, and ordered that every complaint filed under 498A – except cases involving tangible physical injuries or death of the woman – must be referred to a “welfare committee” for scrutiny and no arrest can take place until the welfare committee so recommends. This allows NRI husbands plenty of time to evade arrest and escape abroad. Moreover it leaves women complainants at the mercy of “welfare committees” which are designed to pressurize women back into situations of domestic violence, because welfare committee members are likely to uphold patriarchal values rather than Constitutional values of gender justice.

The whole point of 498A – born of a women’s movement against dowry violence and killings – is to act at the stage of domestic cruelty itself, to protect vulnerable women and prevent killings. What is the point of a Supreme Court restriction that basically believes women complainants only if they are grievously injured or dead? 498A recognizes a variety of ways in which “cruelty” against women works inside homes – including physical, emotional, and economic cruelty; now the Supreme Court verdict implies that the myriad forms of cruelty that stop short of visible signs of physical violence, are merely “trivial issues.”

Moreover, the SC verdict uses the NCRB findings of low conviction rates in 498A cases to conclude that “false complaints” are rampant. That conclusion is unconscionable. There are many reasons why a 498A case might not result in conviction – foremost among these is the fact that the police fail to make sufficient efforts to acquire and safeguard evidence; and so evidence falls short of the bar required for a conviction. Next, in 498A as in all women-related laws including those of grievous violence such as stalking, there is huge pressure on women to withdraw cases and “compromise.” Now, creating a lose-lose situation for women, the SC is blaming women victims themselves for low conviction rates in domestic cruelty cases! Are conviction rates not low in other laws too? How come it is only in laws enacted to protect women and Dalits, that low conviction rates are taken as evidence of “false complaints”?

The Court ignored data of the National Family Health Survey that showed that of the 59% women who experienced some form of physical or sexual violence in the marital home, only 2% women sought police support. This data means that from being misused, 498A is being underused. There are other studies showing extremely high rates of domestic violence including marital rape experienced by women, accompanied by very low rates of seeking legal help or filing a case with the police.

The Court did not take the help of experienced experts in the field of Violence Against Women to understand the issues at hand – and its verdict has effectively rendered 498A of very little use for women facing violence in their marriages.

Meanwhile the Women and Child Development Minister Menaka Gandhi has ordered the NCW to set up a cell to hear complaints of men facing “false complaints”! This is a preposterous and illegal order that mocks the grim fact of the extreme inequality and violence that women face in a patriarchal society.

In another disappointing order, the SC has refused to strike down the exception for marital rape in the rape law, including in cases where the wife is a minor between the ages of 15-18. The Central Government argued in Court that marital rape, including of a minor wife of 15-18 years, must not be criminalized since the “institution of marriage” must be defended. This is an appalling piece of reasoning, though not new.

It is one thing to argue that sexual or marital relationships of young teenagers of a proximate age should not be criminalized as statutory rape (i.e should not be considered rape irrespective of consent). But it is quite another to defend marital rape as somehow necessary to the “institution of marriage.” The recommendations of the Verma Committee that the exception protecting marital rape be removed from the rape law were not respected.

A Supreme Court Bench in a highly condemnable move, has implicitly upheld a very regressive Kerala HC order hanging a 24-year-old woman into the custody of her father on the grounds that she converted from Hinduism to Islam and married a Muslim man of her own choice. The Kerala HC implied that irrespective of the woman’s own views in the matter, she must be assumed to be a “love jehad” victim and kept in the custody of her father. The Supreme Court, without even hearing the woman herself, chose to perpetuate the same bogey and order an NIA probe into the marriage!

The Kerala HC order had affirmed this regressive and unconstitutional notion that “As per Indian tradition, the custody of an unmarried daughter is with the parents, until she is properly married”, even if the daughter is an adult! And the Court implied that the woman had not been “properly married” since she arranged her own marriage; a “proper” marriage was one where a father must “give away his daughter in marriage and to ensure that the person who marries her is a suitable person”! In the context of the spate of honour crimes in this country, this verdict endangers the lives and autonomy of women.

Moreover, it is strange that the Supreme Court does not order any NIA probe into well documented evidence of Sanghi violence against women who contract inter-faith marriages. Is it not terror when Sangh outfits (as exposed by the Cobrapost sting) beat and even drug Hindu women to force them to renounce Muslim husbands? In August 2016, Neha Dixit broke a painstakingly researched story of how the RSS was trafficking adivasi baby girls from the Northeast – against their parents’ will – to “Hinduise” them and radicalise them as RSS cadres. Why does the SC not view this as a terrorist conspiracy that calls for an NIA probe?
The Courts of India are not doing a uniformly great job in upholding and defending the autonomy and equality of women. Instead High Courts and even the Supreme Court has come out with many extremely regressive orders and verdicts that spell great danger for women’s freedom and equality. 