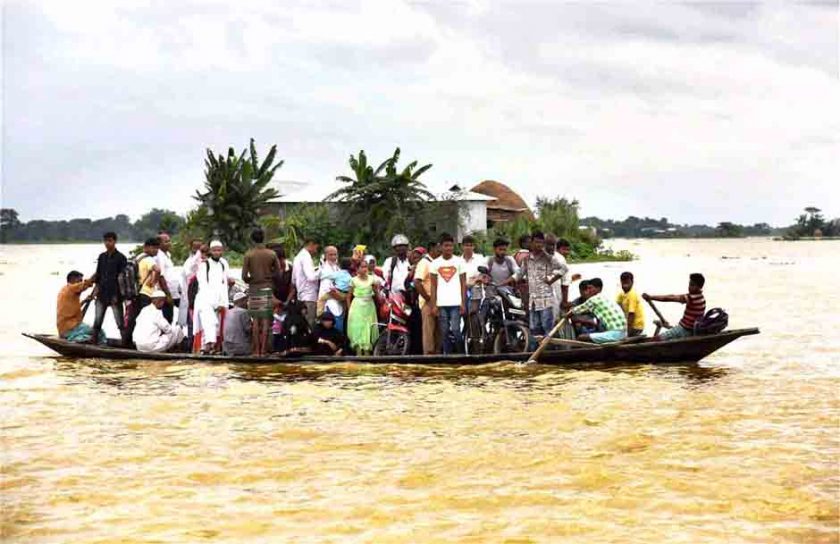 Nobody counts how many gallons of water do flow through Brahmaputra in a year. But everybody remembers the count of water in the flood, enough for devastation, enough for washing away the dreams of thousands, for years after years to come.

2017 has so far witnessed two major waves of floods in Assam. The first wave was in July where ten or more districts were affected with more than half of the state’s population being hit. Among the badly affected districts are Dhemaji, Lakhimpur, Dibrugarh, Morigaon, and Barpeta. Lakhimpur district witnessed worse due to the water released from the dam at the Ranganadi River up in Arunachal Pradesh. The Ranganadi dam under NEEPCO (North Eastern Electric Power Corporation), operational since 2001 is the first run-of-the-river dam of the North East. This situation repeated itself after more than a decade.

Ranganadi, one of the smaller tributaries of the Brahmaputra, originates in the Nilam, Marta and Tapo mountain ranges in Arunachal Pradesh. It joins the Subansiri-Brahmaputra river system in Lakhimpur district after flowing through Lower Subansiri and Papum Pare districts of Arunachal Pradesh. The dam obstructs the flow of the river and a certain amount of water is directed to a tunnel 10 kms away where it drops 600 meters to another river called Dikrong. This is done to achieve the required difference of height for the turbines to move and generate electricity. Dikrong is comparatively a bigger tributary originating from Arunachal Pradesh and joins the Subansiri-Brahmaputra river system in Lakhimpur. The diversion of water from Ranganodi to Dikrong met with the obvious consequence of drying up the river, an issue raised by the environmentalists and concerned people, much before the dam was built. Moreover, people living downstream claim that the Ranganadi river bed has become shallow as the silt from the dam site is periodically flushed into the river. Many identify this as the foremost reason of increased flashfloods in Lakhimpur.

Moreover, this time the failure of the embankment system added fuel to the fire. In Assam earthen embankments have been a customary practice of savior from the furious waves of the rivers. The embankment along the Ranganadi River could hold no protective potential for the villages like Gourihat- Balijan, Bogolijan of Lakhimpur near the Ranganadi river. After the catastrophic floods of 2008 that made ravaged Lakhimpur, Rs 362 crores was announced to rebuild and repair embankments along the Ranganadi River. The project was to be funded collaboratively by Central and the State Government, with the former paying 70% of the total expenditure. This project remains incomplete till date. The annual repair and maintenance works during November and March is very crucial for protecting villages from the imminent floods as the rains usually start from end of March. Year 2017 witnessed the malfunctioning of this regular practice.

Before the people could recover from the first wave of floods, the second wave hit in August; this times more dangerous and devastating, making lakhs homeless, destroying thousands of hectares of paddy fields, killing people and animals alike. This second wave inundated many areas that usually do not witness floods. Almost half of the total districts in Assam are still under water and many tributaries of Brahmaputra still flowing above the danger line. Apprehensions that more water is to be released from the Ranganadi dam makes people tremble in fear.

Nagaon district which is mere a hundred kilometer away from the state capital of Guwahati is facing new challenges as the usually calm Kolong river has flooded its banks, inundating nearby areas. Kaziranga National Park is under water in most of its areas, and a large number of endangered wildlife including 13 rhinos and a Royal Bengal tiger have been drowned. In lower Assam as well, districts like Baksa, Barpeta, Goalpara, Bongaigaon, Chirang, Dhubri, and Kokrajhar could not escape the rage of the flood. The Manas river flowing through the Manas Tiger Reserve, a world heritage site, has flooded larger areas of the reserve. Water from the dam in Bhutan at the Kurishu River when released causes havoc in these parts of lower Assam. Embankments in many places have been ravaged leaving lakhs affected.

Floods in Assam are a phenomenon that can be traced back several centuries. But a massive change in its character became visible after the great earthquakes of 1897 and 1950 when the river bed of Brahmaputra rose to a height as much as 12 feet in several places, with the 1950 one having a significant impact.

Nevertheless people got accustomed to floods as part of their lives. Till recent times, floods were welcomed as it had at least some beneficial potential. The flood water carried sedimentary particles to the paddy fields that make it fertile. Moreover the huge water bodies of the states got a chance for water recharge. Of course periodical devastations occurred, for example the flood of 1985.

But since a decade or more the Brahmaputra has undergone some significant changes. Nowadays the rivers no more carries fertile sedimentary elements, rather it carries silt and the areas flooded by them look like more of a desert. Paddy fields amounting to thousands of hectares get filled up with the silt where no cultivation can be done easily for as long as a decade. Although people have come out with some remedial efforts where they do repeated rounds of washing the silt-filled land along with planting saplings of particular kind of trees that eventually make the land a bit fertile; nevertheless their labour doubles and the gains are halved.

The changing nature of the rivers is primarily attributable to the unscientific models of development and unscientific ways of managing the rivers. The huge construction projects undertaken in recent times like building the Dhola-Sadiya bridge, the Bogibeel bridge, the transnational highways in Arunachal Pradesh, Dibang dam, Siang dam and the most controversial lower Subansiri big dam. According to the data declared by Akhil Gogoi, the noted anti dam activist of Assam, in the construction of the Bogibeel bridge alone approximately 7.5 lakhs of boulders had been collected from the rivers both in Assam and Arunachal Pradesh. According to him the Dibang multipurpose project under construction in the lower Dibang valley of Arunachal Pradesh will require some 193 lakhs cubic meter of stones which equals to almost 32 lakh truckload of stones. Obviously this will be fulfilled by collecting boulders and big stones from the rivers both at hills and plains. A part of it could be met by stones from hills alone. Now geophysicists say that a huge boulder or stone contains silt or sand beneath it four times of its weight. When the boulders or stones are removed the silt and sands become exposed and when the water level rises they flow downstream. As a consequence the river gets filled up with silt first and thus grows to a height more than the banks. And the silt eventually gets deposited in all the areas the river floods. This has been the main cause of the silt-filled paddy fields in districts like Dhemaji and Lakhimpur of Upper Assam (North-eastern parts of Assam).

Likewise in lower Assam the dams and other development projects in Bhutan cause destruction at an alarming rate. The high chance of cloud burst and collapse of dams are reminiscent of the Uttarakhand devastations. While Arunachal Pradesh has been planned to become the “power house of India” with the production of 70,000 MW electricity, the possibility of this model of development bringing devastations in its wake is very high.

An alert, sensitive, and well-prepared spirit on part of the Government in the face of imminent floods was totally absent. As mentioned earlier, even the conventional embankment system could not be maintained properly by Government agencies. The major problem in this regard has been the contractor model of construction where the contractors primarily are concerned about their own profit and where they get away with any corruption with their hobnobbing with Government officials and political leaders, a clear indication of crony capitalism. The Brahmaputra Board, a central Government entity, was created with the purpose of developing mega plans and projects to contain the flood situation and proper management of the river system in Assam. But ironically no significant efforts are discernible yet.

There has never been any early alarm system developed by any Government. Nor have there been any prior makeshift arrangements and prior evacuation plans of human and animal resources in the flood-prone areas. The relief efforts are largely being organised by civil society groups and people themselves. This year the badly affected Morigaon district has only 3 Government-initiated makeshift arrangements. People in flood-devastated Assam have developed the habit of helping themselves during flood. The post-flood Government relief and compensation are too meagre to match the loss during floods and this has been a norm for years.

The flood situations in Assam are going to be exponentially devastating in times to come, if the status quo of unscientific river management and unscientific development processes continue. As the rivers wax even more furious, the devastating deluges will be such that even people’s tears will dry up. 