Recommendations by the Report of Raghuram Rajan Committee: A Critical Assessment

The Raghuram Rajan Committe Report (2013) proposes a general method of allocation of funds based on two criteria firstly ‘developmental needs’ of states measured by performance in certain socio-economic indicators (combined in a composite index of under-development) and secondly, improvement of states in the same index over time. Since the very publication of the report its recommendations have been questioned by critics, including a serious note of dissent by one of the members in the committee, Dr. Shaibal Gupta. Further criticisms have come from particular sections of media. It is necessary to look critically at the methodology used to arrive at the recommendations and also at the politico-economic implication of such recommendations. This discussion attempts to put together a critical account of what exactly the Raghuram Rajan Committe has proposed and also discuss whether the note of dissent by Dr. Gupta appended with the report holds any merit.

The states with highest ranking of index are underdeveloped and states with lowest rankings are relatively more developed.1 But fund isn’t allocated merely on rank basis. Firstly “need” is measured by squared rankings of the index weighted by a. state’s population share and b. states share in area with 80% and 20% weights respectively. Secondly “performance” is measured by improvements in ranking from time to time with weights similar to “needs.”

Finally the two components are combined with 80% and 20% weights respectively to get the final index to decide fund allocation. Apart from that a fixed minimum allocation of 8.4% is given to all states and from the remaining 91.6% funds will be allocated on the above mentioned need and allocation basis.

Like any other index of development such as HDI or HPI, this index also suffers from selection of indicators that point to only one aspect of ‘development’ and ignores other aspects. The notion of development is skewed towards technocratic concept of development hence certain infrastructure variables come repetitively in the making of the index. Moreover, this index like its predecessors has used an arbitrary allocation of weights which makes the process suspect. For example, the best known statistical method for assigning weights across explanatory variables is the Principal Component Analysis. This method statistically identifies the principal component and assigns a factor loading weight to that variable. This is done for the simple reason that variables which measure underdevelopment are generally correlated and any index which is formed could be arrived at by using the principal component as the proxy. Inexplicably, the Rajan Committe uses the principal component for the sub-categories but then uses arbitrary equal weights between categories! Although the infrastructural inputs like household’s access to banking facility or amenities and educational institute are covered, aspects that show the outcome of such inputs – aspects that really show whether these inputs have any success — like [reciprocal of] real outstanding loans or proportion of outstanding loans, health outcomes like nutritional status of women or educational outcomes like repetition rate in a school or employment scenario like proportion of people working in casual labour market have been completely ignored. Some of the indicators chosen is even questionable, for example attendance ratios, since it captures all students attending school in proportion to total number children which is often above 100% because of the inclusion of failed students or repeaters in attending group [numerator] who are from a different age group. In short the indicators chosen have a very narrow and skewed notion of development which only provide importance to “inputs” from above while the mechanisms which hinder such inputs turning into outputs are completely ignored!

Another big methodological blunder that the index does is to combine an indicator of underdevelopment i.e. IMR with other indicators of development using factor loadings to combine as subgroup level and giving equal weights to all of the indicators for final aggregation! Similarly they use percentage of SC/ST population but in places where SC or ST population are concentrated mostly have very bad outcomes in terms of infrastructure, health or education! Thus the final index is misleading as to whether a high value means low income or low IMR, the latter not being a bad thing after all!

Although these methodological issues need proper critique, the ‘insider’ critique raised by Dr. Shaibal Gupta (a member of the committee whose note of dissent is appended in the report) hardly holds any water. However, it is important to discuss Dr. Gupta’s opinions regarding the recommendations since they are also problematic and distracting from the real problems that the index has. The major point of dissent by Dr. Gupta is on the use of consumer expenditure from NSS in place of Per Capita Income or GSDP from NAS2 as the former according to Dr. Gupta doesn’t reflect real development which should also incorporate income by large farms, modern industries which according to him results in high investments for development. And he also criticises consumption expenditure as unreliable! I’ll come to the point of investments later but as for the question of NSS vs. NAS, criticising the use of consumer price data instead of NAS data is ridiculous. Studies from past half a century have established the validity and acceptability of NSSO data on consumer expenditure. NAS data is total accounts of all consumption units – which includes the consumption of large institutes e.g. expenditure of political organisations spending for election purposes will be accounted in NAS whereas NSS is sampled carefully to represent households and individuals. People who are elated to refute NSS should understand that NAS will always overestimate real income of a state.

In the next point Dr. Gupta argues that investment affects well-being of population and lack of it makes a state backward. Using investments and industrialisation as indicators of development will definitely put industrialised Gujarat ahead of many other states developed in other social indicators but if in a state investment is high and yet consumption is low, it only shows how benefits of so called ‘investments’ are in favour of particular sections of population leaving a larger section in poor state. A low correlation between GSDP per capita and Consumption Expenditure rather shows that income in GSDP which includes income of large industries and mining units have nothing to do with real level of living of people. This again rather than weakening the argument for using consumption expenditure strengthens it.

Although rankings based on mpce-included index are different from GSDP rankings of states, it is not necessary that the index is wrong, it is very much possible that GSDP rankings may be wrong. In fact the very way Dr. Gupta uses the term ‘distortions’ to criticise NSS estimate of mpce as representative of welfare is strange since he argues that any diversion from trends shown by GSDP estimates of income are “distortions”!!

To establish the ‘distortion’ argument Dr. Gupta refutes a correlation of 0.85 between index with PCI and index with mpce but in social science isn’t correlation of 0.85 more than sufficiently high? In fact the real point of dissent of seems to be the fact that Gujarat is not showing the performance expected!

Getting back to the problems with Raghuram Rajan’s index I should point out that methodological problems are not the only ones the index has. Added is the paradox of underdeveloped States losing development funds despite being “needy” because of not “performing” better than already developed states which have better infrastructure to “perform” well.

Also the allocation share because of its arbitrary weighting is highest in Bihar, Andhra Pradesh and Uttar Pradesh which seems problematic given the initial objective of the report was to provide the under developed states with “disproportionately high” share of funds. It clearly doesn’t suggest that since states like Jharkhand gets only 3% of funds whereas UP gets 16%. In the discussion of results the committee has commented that districts suffering from insurgencies or Left wing extremism are least developed in the index but then its performance weighted allocation puts UP and Bihar ahead of Jharkhand which is clearly more needy than the former states.

In short the works in the Committee’s report suffer from methodological problems, narrowness of scope for failing to go beyond technocratic notion of ‘development’ and spurious rules of allocations of resources. The appended note of dissent also doesn’t hold much merit as it fails to question the fundamental problems in its approach towards development. Any allocative norm from above which refuses to recognise why such allocations fail and which dimensions of development need special attention for turning these inputs into outcomes. Unless the government is ready to recognise the real problem of underdevelopment and act upon it, such hyped recommendations remain a failure.

Updates Report : All India Conference of Contract Workers in Bangaluru 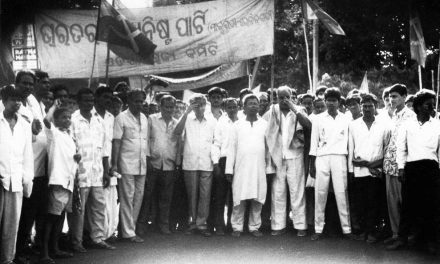 He Touched the Hearts and Minds of All Who Knew Him