On May 10th 2012, we visited Durg Central Jail in Chhattisgarh on behalf of AIPWA, to express solidarity with advocate-activist Rekha Parganiha, who has been charged by the state government under the infamous Chhattisgarh State Public Security Act (CSPSA). Rekha, an advocate well-known for fighting cases on behalf of victims of state repression, has been in jail for more than two months. We had to take special permission from the jailer to meet her (kyonki woh Naxali mahila hai (because she’s a Naxalite woman), said a guard), and after having submitted proofs of our identity, we talked to Rekha.

Rekha’s case once again highlights the impunity with which the Chhattisgarh government is running roughshod over basic democratic rights. She has been charged with ‘sedition’ under the CSPSA – and what is the ‘evidence’ of the ‘seditious’ activity? Rekha is the wife of Deepak Parganiha, who was arrested in Kolkata in early March along with four others, ostensibly because they are members of the Central Technical Committee of the CPI(Maoist). And according to the state government, Rekha is also a ‘Naxali’ (the commonly used euphemism for ‘Maoist’ in the state government’s vocabulary) because she is his wife! These charges are being made against her, even though it is well-known that Deepak has not been in touch with any member of his family for the past four years. During the hearings in the Durg court, the government claims that Rekha is ‘guilty’ because she did not file for a divorce, neither did she report her husband’s absence by filing a missing person’s report.

The “incriminating documents” seized by the Chhattisgarh Police from Rekha’s house include literature by Bhagat Singh, Marx, Engels and Bertolt Brecht, as well as some folders on the history of the workers’ movement released by AICCTU and some articles from India Today and Teesri Duniya. When we met her, Rekha said the Police has even doctored the list of seized material – a book on the Maoist movement of Nepal was added on the list, though it was not found in the house.

Though the long incarceration of Dr. Binayak Sen as well as continuing state repression and use of draconian legislations like the CSPSA and the Sedition Act have created a public outrage from democratic sections across the country, the Chhattisgarh government continues to arrest and imprison well-known dissenting voices under absurd and flimsy charges. Rekha tells us that even in Durg Central Jail, three women (including her) have been framed under CSPSA. One of them has been charged with five years imprisonment and is serving her sentence, and the other is Ruchi, whose case Rekha has been fighting for the past two years before she herself was thrown into jail. Rekha also tells us that Ruchi’s trials in court have been going on for four long years, even though the state government has named just six witnesses. This, she says, is no stray experience.

Ironically, Rekha has been named as an accused in the very same case (Bola Bagh versus the State of Chhattisgarh) which she herself has been arguing on behalf of Bola Bagh’s wife Ruchi. When asked about her experiences in jail, Rekha says, “All human rights come to an end immediately after an FIR is filed against you”. She had recently been part of a team, along with the Delhi-based Human Rights Law Network (HRLN), visiting jails in Chhattisgarh to collect information on rights’ violations, and now she says she will write an insiders’ account of the reality immediately after being released.

Soni Sori and Rekha Parganiha are just two victims of the Chhattisgarh government’s attempts to suppress any dissenting voice. But these women and their courage are also indications that such attempts will not succeed. 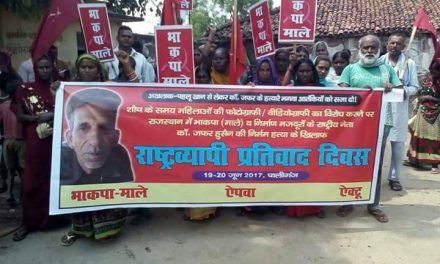 Justice For Zafar: Freedom From Bullying