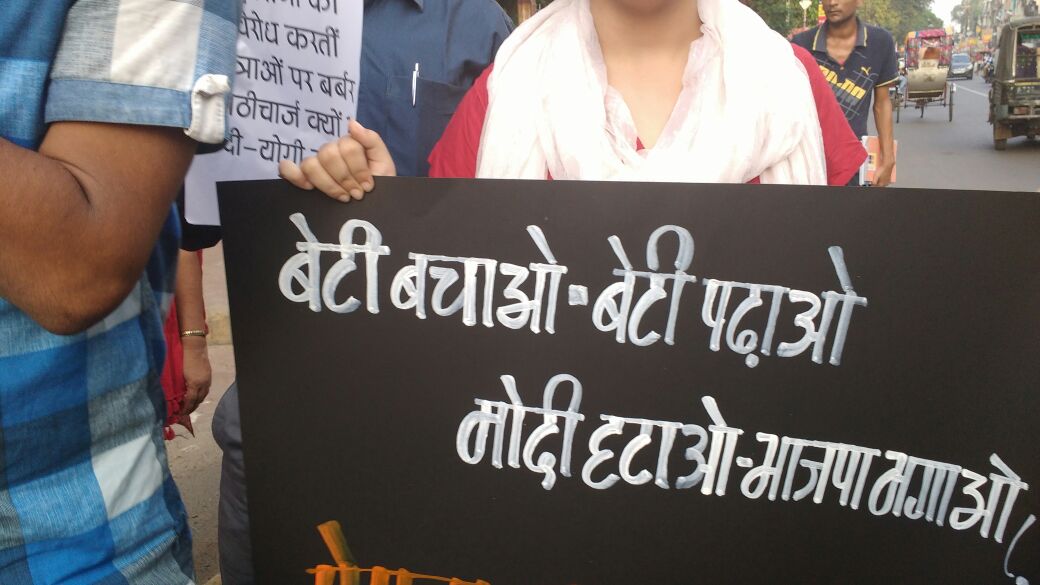 The women students of Banaras Hindu University are raising a vital issue of safety and equality on their campus. It is shocking that instead of heeding them the BHU VC has branded the incident of molestation and the women students’ concerns as “a political conspiracy” and unleashed a lathicharge.

The women students’ movement began when the University administrators responded to a grave incident of molestation on the campus by blaming women students for being out of their hostel in the evening. Even now, the VC has been giving interviews trivializing the incident by terming it mere ‘eve-teasing’, not molestation. The women students are demanding street lights and women security guards. They are also demanding a functional GSCASH that will sensitise administrative authorities at all levels about women’s equality as well as deal with sexual harassment complaints. And they have been demanding for a long time that discriminatory hostel rules that subject women students to different curfews than men, and prevent them from having non-vegetarian food in hostels, be scrapped.

The BHU VC – who has described himself as a proud member of the RSS and is a BJP appointee – has chosen to brand the incident of molestation as politically motivated to create trouble during PM Modi’s visit to Banaras! Why is a Vice Chancellor speaking like a politician and seeing a students’ movement for campus safety through a politically coloured lens? Why is he more concerned about the Prime Minister’s visit than about the safety of women students on his campus?

Shockingly, the BHU VC is saying that the only way he can ensure safety is by ensuring that women students are locked into the hostels – if they walk on the campus streets, he cannot bear responsibility for their safety. He refuses to acknowledge that the already discriminatory hostel curfews have not kept women students safe – instead they have allowed authorities to blame the victims’ presence on the streets for the violence.

The BHU VC is trying to blame the entire women students’ agitation on “provocation by outsiders” – he is unwilling to credit the women students of BHU with their own independent minds. This is reminiscent of the Minister of State for Home Kiren Rijiju who had suggested that DU student Gurmehar Kaur was speaking for peace and against war and violence because her mind had been “polluted” by someone. It is high time that those who run the country and campuses learn to acknowledge and respect the minds of independent young women.

The BHU VC and Uttar Pradesh Government have chosen to respond to the basic safety concerns of women students in the same way they deal with seminars and questions by students in JNU, DU or HCU: brand it as ‘anti-national’ and unleash brutal police repression. Reportedly, FIRs have been filed against 1000 BHU students, while several including women students were severely lathicharged by the police.

The PM raises the slogan of ‘Beti Bachao, Beti Padhao’ – Save and Educate Daughters. But in fact BJP leaders seem to vie amongst each other to abuse and insult ‘betis’ (daughters), even as BJP-appointed VCs unleash repression on them. BJP’s choice for UP Chief Minister, Yogi Adityanath, is on record writing that women must be kept under the control of men all their lives in keeping with the diktats of the Manusmriti. The likes of Yogi Adityanath and BHU VC GC Tripathi feel deeply threatened when women go “out of control” of patriarchy, and raise their own voices to demand freedom and safety. Adityanath’s “anti-Romeo squads” went around attacking consensual couples – but the UP police and campus administration are unable to act to ensure that molesters do not enjoy a free run on the BHU campus.

All over the country, young women on campuses are making it clear that they demand safety along with equality and freedom; they refuse to accept attempts to equate safety with patriarchal control, and they refuse to accept victim-blaming and moral policing without protest. All over the country, students are refusing to accept attempts by RSS-BJP VCs to brand dissent, questions, seminars and research as ‘anti-national’. BHU students have shown the way – daughters will study, daughters will fight, daughters will forge ahead!