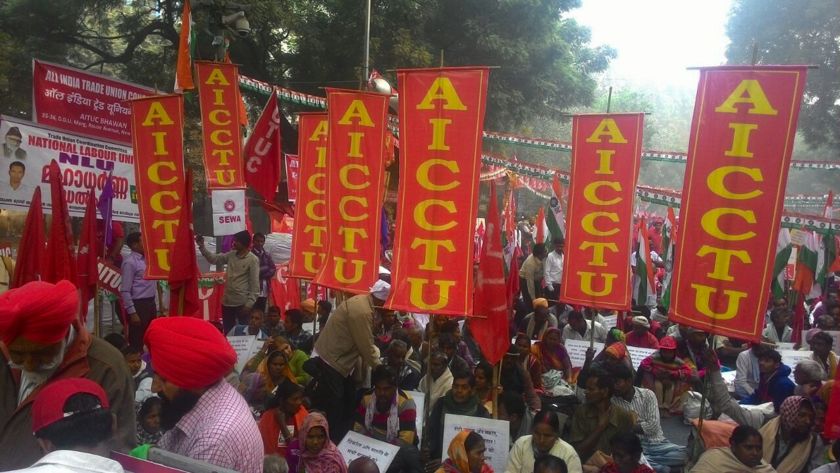 For three days from 9-11 November, New Delhi’s Parliament Street pulsed with the energy of a sea of workers from all over the country, demanding their rights. Their slogans and voices resonated loud and clear. India’s working class, in one voice, spoke for the whole country as they demanded curbs on price rise and universalisation of the public distribution system and creation of jobs. Their presence in thousands at this protest ‘Mahapadav’ (grand sit-in) at Parliament Street was an indictment of the Modi Government and its utter betrayal of the labouring people of India.

The workers demanded to know why workers were being denied their due: minimum wages, social security, and secure jobs? Why are contractual jobs becoming the norm instead of being made permanent; with contract workers being denied equal wages and benefits? Why are workers being penalized for organizing themselves in trade unions? Why is the Government attacking labour laws, to tie workers hand-and-foot in the service of corporate interests? Why are public sector units being rampantly privatized?

The Prime Minister calls himself ‘Mazdoor No. 1’ (First Worker) and projects an image of having been a tea-seller: but he himself is leading the charge against the country’s workers. The anger of workers against the demonetization and GST policies of the Modi Government was palpable – policies that have devastated small businesses and destroyed thousands of jobs. Meanwhile, the Government’s claims to have struck a blow against corruption and black money had also proved a lie.

The Mahapadav was notable for the participation of workers from both the public sector and organised sector as well as the vast mass of vulnerable unorganized sector workers – including construction workers, contract workers, workers in the various Government schemes (ASHA, anganwadi, mid-day meal etc) who are denied recognition as Government employees and paid a pittance, street vendors, domestic workers, and sanitation workers. Women workers from various sectors asserted their presence, demanding equal wages and recognition as workers. Domestic workers and scheme workers refused to allow their work to be disguised as ‘social service’ and ‘voluntary work’. “Don’t call us ‘Bhojan matas’ or ‘dai’ or ‘ASHA behen’ (terms meaning ‘mother’ and ‘sister’), recognize us as workers and give us our rights rather than disguising our labour in familial roles,” they said.

The workers were also acutely aware of the bias against them in the corporate media. Most TV channels – that had given 24/7 coverage to the anti-corruption dharna in 2011, studiously ignored the workers’ dharna which was at least as large if not even larger. It was clear that these channels had made a deliberate decision to avoid covering the protest of workers who – with red flags in their hands – were asking the Government questions about its pro-corporate priorities.

The workers also raised their voice against the undeclared Emergency in the country: pointing out that workers’ leaders, people’s movement activists, and journalists are being jailed under draconian laws, threatened or even killed for challenging the Government or the ruling BJP. They robustly exposed and rejected the BJP-RSS ploy to divide the country on communal lines, expressing solidarity with the victims of communal and anti-Dalit lynch mobs.

The massive participation of workers in the 3-day dharna at Parliament Street was not only an assertion of their struggle for their rights; it is a significant boost to the ongoing people’s resistance to the fascist forces. The RSS-affiliated trade union BMS’s attempt to demobilize workers from the 3-day dharna by calling for a separate protest later this month failed badly. By making the three-day Mahapadav a roaring success, the workers have exposed and rejected the BMS as an agent of the anti-worker Modi Government and of fascist forces.

The Mahapadav has given the Modi Government an ultimatum – if their demands are not met, the workers may go for an indefinite countrywide strike. Such a strike, by bringing production and services to a grinding halt, will remind the Government, the oppressors, and the privileged classes that labourers are not machines but human beings, whose needs and rights can be ignored and suppressed only at their own peril.