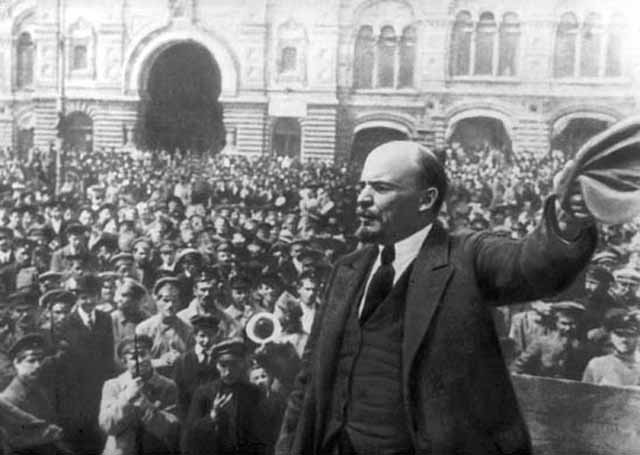 A hundred years ago, the world had experienced a different kind of earthquake. An unprecedented upheaval in Russia had shaken the whole world. It was a revolution where for the first time political power passed from the hands of a small caucus of the rich and the elite to a grand collective of the oppressed and toiling masses. It was no military coup or conspiratorial strike, rather waves of organised people’s power sweeping away the relics of an autocratic regime. A festival of the oppressed, an awakening of a disempowered people to a life of freedom. It was the great October (now remembered as November in the wake of a change in calendar) revolution led by Lenin and his party of Bolshevik revolutionaries.

Never before had the world witnessed anything of this sort and on such a scale. True, the Communist Manifesto published nearly seventy years earlier had envisioned such a revolutionary overthrow of the old (capitalist) order to march towards a new symphony of human emancipation. True, Marx’s Magnum Opus, Capital, had first seen the light of day fifty years previously, soon after which the brave communards of Paris had demonstrated in action the feasibility of the idea of a revolution led by the working class. Yet, it was the November Revolution which for the first time showed the full potential of this vision, clearly and decisively, before the entire world. The world got its first paradigm of a popular uprising where workers and peasants came together, civilians and soldiers fought together, women and men marched together, the young and the old celebrated their victories together.

Of course, it did not happen just in those ten days that shook the world as immortalised by the great socialist chronicler John Reed. It took decades of class struggle to facilitate the rise of the revolutionary Russian Social Democratic Labour Party that eventually grew into the Communist Party of the Soviet Union, a series of strikes and other struggles, much study and analysis, research and social investigation, rigorous organisational discipline and great political imagination and initiative, and of course plenty of failures and rehearsals including the failed revolution of 1905 and the stepping stone of the February 1917 revolution.

The November Revolution effected a sea change in the initial communist idea of revolution taking place only after capitalism had reached a saturation point, as a moment of explosion of the inherent contradictions of capitalism. Instead, revolution happened in a backward capitalist country saddled with feudal survivals and ruled by an autocratic tsarist regime. It also replaced the soaring expectation of revolution on a continental, if not global, scale with the sobering reality of revolution in a single country, of the imperialist chain snapping at its weakest link. Of course, the revolution triggered a global awakening and served as the strongest inspiration in the early 20th century in the battle for freedom and democracy in every corner of the world.

Along with the Communist Manifesto, the November Revolution made the biggest contribution in spreading the ideas of socialism and inspiring the communist movement across the world. For all its subsequent limitations and problems, it must be said that the Communist International formed in the wake of the November Revolution played a historic role in encouraging and strengthening the international communist movement in its formative years. The transformation of backward Russia into an advanced nation with all sections of the working people enjoying rights never witnessed before in any capitalist country and the rise of a people-oriented planned economy in place of the profit-hungry market economy spread the message of socialism far and wide. Indeed, the growing international impact of the Soviet Union made it a rallying centre for countries across the world looking to overcome colonial and feudal hurdles to emerge as free and prosperous nations. For a major part of the twentieth century, the Soviet Union remained a powerful counterpoint to the capitalist world.

The stagnation, derailment and eventual collapse of the Soviet Union cannot obliterate its role as an inspiration for national liberation movements, as the bulwark of resistance against Hitler’s fascist aggression, the force that bore the brunt of the fascist attack and eventually emerged triumphant to the great relief and joy of the whole world, and finally as a contending pole against the global domination of US imperialism. Following the disappearance of the Soviet Union we are witnessing a massive neo-colonial offensive of global capital and a desperate American drive for unipolar global domination and now in the rise of Donald Trump and his trumpets in different countries, even the threat of a resurrection of Hitler’s brand of fascism appears all too real. Our celebrations of the centenary of the Great November Revolution must be not just an affirmation of a pivotal moment of world history but a determined resolve to draw on its multiple lessons and inspirations to face the present juncture and develop a revolutionary answer to the challenges posed by a crisis-ridden global capitalism and the badly dented and dilapidated paradigm of bourgeois democracy.

Of course, even in its collapse, the great twentieth century world historic experiment that was the USSR, left us with questions that socialism in the twenty first century must answer. Socialism has to outdo capitalism in its inner dynamism, socialist democracy must be able to demonstrate its superiority over bourgeois democracy in every respect, the working class organised under the communist party and leading the socialist state must ensure sustained comprehensive representation and participation of the whole class and draw consistently on the advances in science and technology and other fields of knowledge and creative arts to propel the socialist model forward. But most crucially, it is the grand innovative and revolutionary spirit of the November Revolution, of turning adversity into opportunity and seizing the moment firmly and decisively in the interest of the revolutionary advance of the people and the communist cause that must guide and drive today’s communists in facing the Trumps and Putins and Modis and Erdogans of our times.

PS: It is heartening to remember that Liberation had begun its journey in November 1967, in the fiftieth anniversary of the great November Revolution. The historic Naxalbari peasant uprising had just happened a few months ago and its thunderous message had begun to resonate in distant corners of India. Communists across the world had launched a powerful debate against the early signs of stagnation and distortions in the Soviet Union, especially in its foreign policy with the erstwhile socialist model getting trapped in a superpower syndrome in its contention with US imperialism – and Liberation had joined the debate, with its bid to spread the message of Naxalbari in the face of a brutal crackdown by the Indian state and uphold the revolutionary legacy of November. Today, when the November Revolution has turned 100, Liberation has also completed 50 challenging years. Liberation salutes the ever inspiring revolutionary legacy of Lenin and November and Charu Mazumdar and Naxalbari. We shall fight, we shall win. 