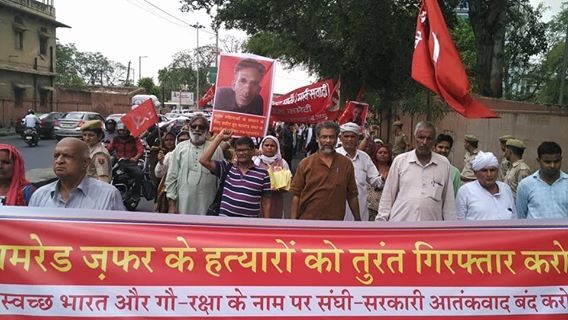 The team visited Comrade Zafar’s home in the Bagwasa Kachchi Basti in Pratapgarh and met Comrade Zafar’s brother Nur Muhammad, his wife Rashida and daughters Ruksar and Sabaz who are determined to fight for justice.

The team was told by Comrade Zafar’s family and neighbours that on 14th June Comrade Zafar had led local women to the District Collector’s office to raise the issue of public shaming and sexual harassment in the name of curbing open defecation and to demand that government officials be restrained from disturbing people defecating in the open till community toilets are constructed in the Basti. But the DC refused to meet them.
Local CPI(ML) activist Shivlal Meena said that on 15th June Com. Zafar led a delegation to the Municipal Commissioner Ashok Jain who also refused to hear them out. Sabaz also recollected how the chairman of the Pratapgarh municipality, Kamlesh Dosi of BJP, tore away the memorandum and asked them to get the colony ready for eviction.

The Commissioner, who refused to meet the delegation at his own office, was however present next morning at the Kachchi Basti instigating his men against Zafar, who was beaten to death for trying to stop the Commissioner and his men from taking photos and videos of women in a state of undress while defecating.

The Municipal officials, to deflect from their own guilt, have filed false cases against the victim Comrade Zafar himself, booking him for ‘obstructing’ them in the performance of their duty. This follows the pattern of other lynching cases in which Pehlu Khan, Akhlaque and others had false cases filed against them.

Comrade Rashida, Zafar’s wife, has rejected a Rs 2 lakh cheque offered by the district administration and demanded justice instead. Comrade Zafar’s family is facing physical threats to coerce them to withdraw the case. The Kachchi Basti itself is in danger of eviction, though its residents, led by Comrade Zafar, had been fighting for regularization since 1985.

Comrade Dipankar and other Left leaders then held a meeting of the local people and saluted them for their courageous resistance and pledged full support for the battle for justice for Comrade Zafar. ‘The martyrdom of Comrade Zafar’, said Com. Dipankar, ‘will inspire communists and other activists of people’s struggles across the country to resist the forces of fascism and win full rights and dignity for the toiling people of India.’

On 20th June, a protest march demanding justice for Zafar was held in Jaipur. The protest march started from CPI (ML) State Office and culminated at Shahid Smarak where a protest meeting was addressed by various leaders of left parties and activists of other people’s movements. Slogans were raised during protest march against the Vasundhara Raje Government, demanding immediate arrest of Nagarpalika Commissioner Ashok Jain who instigated Nagarpalika Karamcharis to attack Zafar Khan.