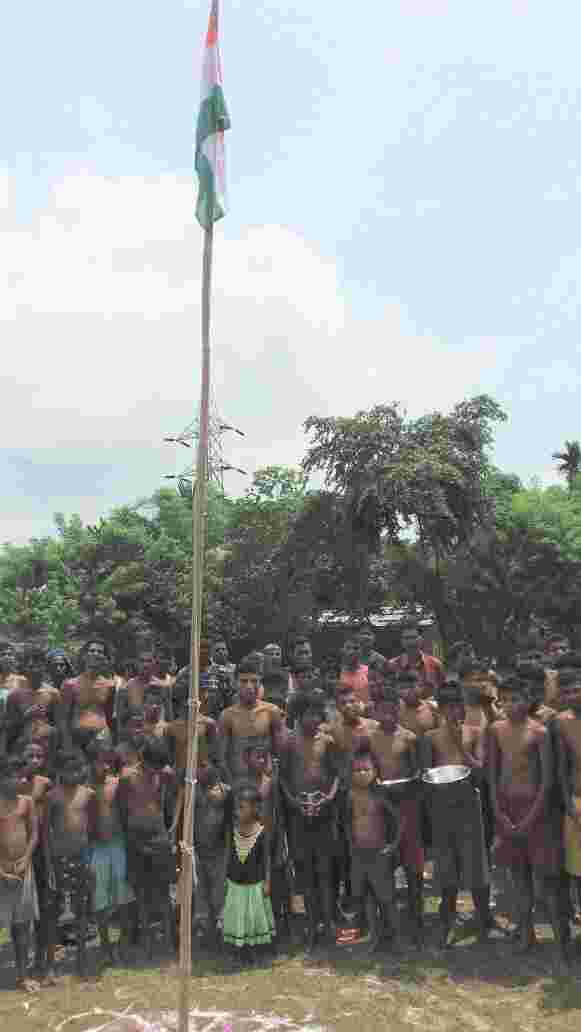 Workers protesting the prolonged illegal lockout in Bargaon tea garden in Bishwanath district, Sonitpur, Assam observed Independence Day by hoisting the national tricolor – with male workers keeping the upper body uncovered to symbolize their poverty and destitution. Appallingly, the Assam Police under the Sarbananda Sonowal Government have booked the workers under Section 2 of The Prevention Of Insults To National Honour (Amendment) Act, 2003, i.e “disrespect to the Indian National Flag.”

Organising under the banner of the Sadau Assam Sangrami Cha Shramik Union, workers of the Bargaon tea garden have been demanding that the management pay the firewood which is legally due to the workers but has not been paid for three years; and also provision of an ambulance and nurse in the tea garden. A year ago – on August 31 2016, the management signed an agreement with the Union in the presence of the Labour Officer promising to meet these demands by December 2016. In June 2017, the tea garden workers protested because the agreement has been flouted blatantly. Rather than honour the agreement and give the workers what is legally their due, the management of the Bargaon tea garden illegally locked out the workers since July 20, 2017.

The situation of tea garden workers in Assam and West Bengal is notorious – chronic hunger, starvation and malnutrition breed tuberculosis, and workers are deprived of their basic rights. Toilet, drinking water, education and heakthcare facilities are dismal or non-existent. Workers are denied timely payment of wages and other dues. The National Rural Health Mission notes high rates of maternal and infant mortality in the tea gardens, in the absence of proper healthcare facilities. Tea garden workers – from oppressed adivasi communities – are victimized for unionizing to demand their rights, or even murdered as Comrade Gangaram Kol, one of the leaders of the Sadau Assam Sangrami Cha Shramik Union, was murdered in 2013.

The BJP Government of Assam sees no insult to national honour in the fact that 70 years after India’s independence, adivasi tea garden workers continue to suffer colonial-era oppression and deprivation. But if the same workers make a powerful, silent rebuke of the Governments for excluding them from their rights as citizens by hoisting the national flag on Independence Day with their bodies half-naked, the Government is quick to accuse the workers of disrespecting national honour!