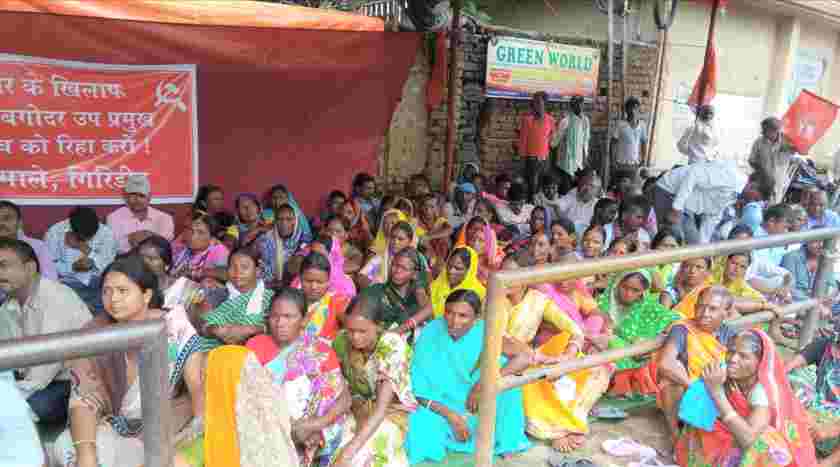 The CPI (ML) held a dharna on 22 August 2017 at Bagodar on the issues of loot in MNREGA in Birni and other places, repressive policies of BJP against dissent, arrest and jail of Sarita Sao when she opposed poor quality toilet construction in Bagodar, and other issues.
The main demands of the dharna were:

The dharna was addressed by MLA Com. Rajkumar Yadav, Com. Vinod Singh, Com. Rajesh Yadav, Com. Rajesh Sinha, and others. The speakers said that loot and repression in the name of development is the hallmark of BJP governments. They care more for other animals than for humans, and even their concern for animals is hypocritical, as is shown by the large numbers of camels exported to other countries for Bakrid slaughter from Rajasthan and Gujarat. Workers are not getting work, the poor are not getting rations, farmers are not getting proper purchase price. The government is diverting attention from these essential issues through other unnecessary issues and by creating an atmosphere of communal hatred and divisiveness. The speakers pointed out the loot going on in MNREGA, toilet construction, and the conspiracy to privatize the public sector including the railways. They said that false cases and arrests are being slapped on people who raise their voice against loot and repression. Giridih is struggling with many basic problems but the local BJP MLA and MP are least bothered and are silent on the people’s problems. The current acute electricity problem is an example of the BJP government’s indifference to the problems of the people. If this situation continues, said the speakers, the people will gherao the MLAs and MPs in the same way that the Koderma MP was gheraoed in Sariya.