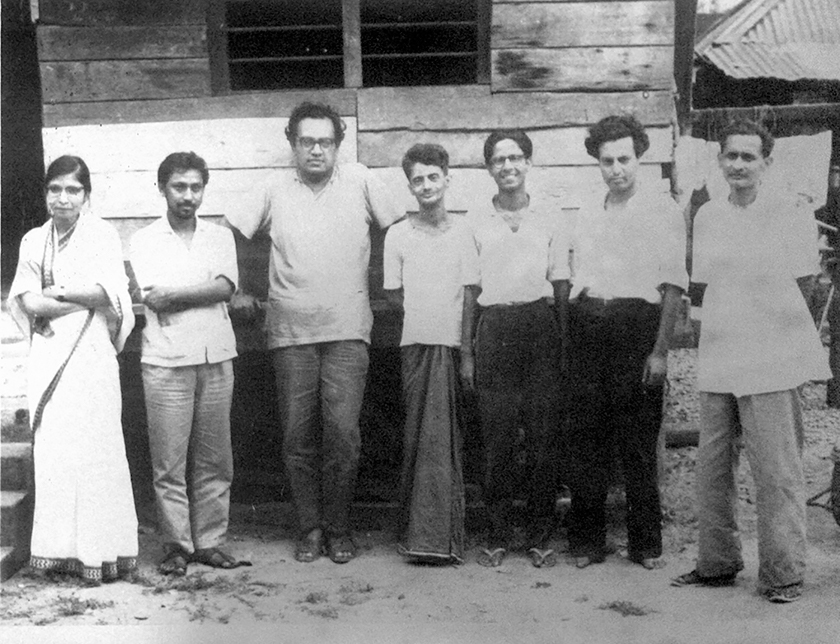 [What was the impact of the Naxalbari movement on family members of CPI(ML) leaders? Here, Abhijit Mazumdar, that speak of his memories of his father Comrade Mazumdar, mother Leela Mazumdar and the impact of the Naxalbari movement on his childhood. Comrade Abhijit is now a Central Committee member of CPI(ML) Liberation. These remarks are excerpts from an interview with Comrade Abhijit by members of the Paschimbanga Gana Sanskritik Parishad during the Jan Jagran Padyatra that took place between 19-21 November 2016 in the historic Naxalbari villages of Naxalbari, Kharibari and Phansidewa.)

The Atmosphere in Our Home

When the Naxalbari Movement started (March 1967) I was 7 years old. In the days of the Naxalbari movement around 100 comrades used to come daily to our house. Tea and other things used to be arranged for them. Afterwards, when police oppression and repression used to go on all around, my siblings and I used to feel that the police are our enemy. Charu Mazumdar went underground due to inevitable reasons. Police raids and upheavals happened all the time in our house. We had also become mentally prepared for this; it was as if we knew beforehand that the police would come to catch our father. That was the atmosphere in which we grew up.

There was a wooden room in our home in which we children used to run a club called Shishu Sangh, initiated by me. We (Abhijit and his two older sisters) were around the ages of 7, 8 and 9 at that time. This was in the early days of the Naxalbari movement. Posters used to be prepared in that room of our home. We kids also wrote slogans on the wooden wall with chalk, such as ‘China’s Chairman, Our Chairman” and “Naxalbari Zindabad.” Thus the impact – or sensibility – of Naxalbari was felt by us, partly consciously and partly, unconsciously. During the long period until 1972, almost all the leaders of undivided CPI (ML) used to come regularly to our house. They were “Chacha” (uncles) to us kids. Several meetings took place between my father and other ML leaders. My elder sister was a little older than me, so it was she who used to go there usually. This was the kind of family atmosphere we were growing up in.

The atmosphere in our home was political from the beginning. My grandfather was he President of the Siliguri Congress. In this sense we have grown up in a political environment. …Going to the jail and meeting our father, sitting with mother outside Jalpaiguri jail for hours, preparing food to take to father in jail…our political consciousness developed in this political environment.
Cultural Climate

China had influenced our cultural discussions from the beginning. In those days we used to get a paper called ‘Peking Review’. We kids used to look at the pictures in that paper. We got introduced to Mao’s poems from those days. There was even a Chinese record in our house; we used to borrow a record player from neighbours and listen to songs in the Chinese language. One of the songs was, “The sun rose from the east/China gave the world Mao-Tse-Tung/For the good of the proletariat…” We grew up listening to these songs. In 1970-71 ‘Shyamda’ from Kolkata used to come to our house. Shyamda had a loud and clear voice. He used to sing ‘Gana Sangeet’ in our programmes. This is the Shyamda who later took the sick Charu Mazumdar on his shoulders for a journey to Jammu and Kashmir. Ajit Panday also used to come to our house and sit on the floor in our wooden room and play the harmonium and sing. In those days there was a drama group called ‘Katha aur Kalam’. They used to rehearse in the sitting room of our house. Asim Bhattacharya and Bijan Choudhury used to write plays. The play ‘Kallol’ used to be rehearsed there. My father used to direct sometimes, and sometimes do the ‘recitation’ of prose or poetry. I have seen from close up the cultural creativity which happened after Naxalbari.

When I was 9 years old my father went underground. We used to dodge the police and meet my father secretly. Sometimes we met him in places like Puri and Waltair. I used to go to meet him again and again. Actually we missed his ‘touch’. The last 6 months to one year before his death we could not make any contact with him.

My father was very fond of songs. In those days All India Radio Siliguri used to broadcast classical music from 12.30 to 1 pm. We did not have a radio in the house. Souren Bose brought us a radio. My father used to sit and listen to classical music for half an hour and talk about ragas. Father did not have a very tuneful voice but he used to sing one song again and again, “Jete Jete Ekla Pathe/Nibhechhe Mor Alo” (Journeying alone on the road/ My light was extinguished). People who learned the art of recitation from my father became recitation artistes in All India Radio. My mother used to recite Rabindranath’s poems very fluently. In the days when Rabindranath’s statues were being broken and he was being called a bourgeois poet, there was no opposition to him in our house. There was no such direction from my father and mother.

On the days when my father was not in jail, and was not ill, and not busy in Party work, he used to teach my sister mathematics. In the rainy season when water stagnated in the courtyard of our house, father used to cut a channel with his own hands and remove the water. He had no attitude of being a ‘leader’. My father was a very simple sort of person.

Many people used to come to father. Utpal Dutt used to come and meet him. We used to see Utpal Dutt’s style of speaking and ask father, “When someone is talking in Bengali and inserts English in between, what is it called? Does this have a name?” During the Central Committee meeting in Puri I stayed there for one month with my mother. Saroj Datta, Susheetal Roychaudhary and many other leaders were also there. I used to sing songs there.

My mother was not just a companion in my father’s ideology and his struggle; the word ‘companion’ is not the right word for the role played by my mother because she was a political personality in her own right. Much before she met my father she was active in political work. My maternal grandfather was a doctor in the District Board. Those were the days of British rule; freedom fighters used to be kept confined to their villages. They used to come inside my grandfather’s chamber. My grandfather used to get one or two newspapers once a week. The freedom fighters confined to the village used to read these newspapers and get information about events in the country and the world. As a young girl my mother used to serve tea and refreshments to those freedom fighters. So my mother was politically conscious from an early age.

During the Tebhaga movement she used to distribute relief material for the Kisan Samiti. During the 1943 Bengal famine she worked for the People’s Relief Committee (PRC) and organized cultural teams. Later she became a member of the undivided Communist Party. When the Party was declared illegal in 1947 my mother had to go to jail. After being released, she was once again jailed in 1950. She and Charu Mazumdar had met when he was doing Party work in Jalpaiguri during the Tebhaga phase. They fell in love and got married in 1952 after which they came to Siliguri.

My mother was a member of the Darjeeling District Committee till just before 1964. She used to leave us in others’ homes and go to the hilly areas to work for the organization. In truth, my mother remained a political personality from beginning to end. But she could not keep up that kind of activity during the Naxalbari movement, and the reason for that was that she had to bear the bulk of the responsibility of bringing up their three children. It would not have been possible for Charu Mazumdar to carry on his work as he did had it not been for my mother Leela Mazumdar. Their mutual respect and friendship was extremely strong.