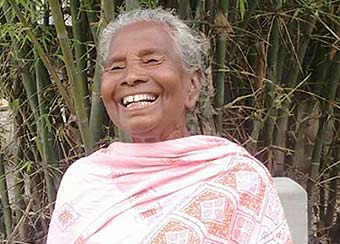 (Comrade Shanti Munda is a veteran of the Naxalbari peasant uprising. Goutam Chakraborty and Basudeb Bose spoke to her at her home in Sebdolla Jote in Hatighisa village of Naxalbari to get a first-hand account of Naxalbari from this great fighter.)

She does not remember the date or month of her birth, but she is aware that 2017 is the 74th year of her life. When and how did she join the Communist Party? Comrade Shanti Munda begins to tell us her remarkable story. “It happened ages ago. I must have been only twelve or thirteen then. I came in contact with the Mahila Samiti (women’s association). Comrades used to come to our village and soon I started accompanying them from one village to another. With Comrades Chhaya De, Leela Mazumdar, Galeshwari Tharu, mothers of Jangal Santhal and Babulal Biswakarmakar and so many other comrades, I used to roam in the villages of Champasari and Mallaguri areas. Comrade Charu Mazumdar owned some land in this area. Ladhiya Manjhi and Sukhu Manjhi used to till that land. I still remember Charuda handing over his land to the sharecroppers.”

Shantidi tells us about the plight and struggles of the share-croppers. “I was born in a poor peasant family. But the land we had was not enough for maintaining our family. So my father used to till the land of Khyapachand Biswas of Naxalbari. Initially we had to pay the rent in terms of paddy – 18 maunds of paddy for 14 bighas of land. But then came money rent – we had to pay in cash for 18 maunds of paddy. I have seen the tears of sharecroppers who had to give away whatever they produced and even their agricultural implements to the landlords to pay the rent. I remember my father had to go to Nepal by crossing the Mechi river to get some salt and sell it in the village market to make both ends meet.”

Shantidi’s family used to support the Congress. Her father was a Congress worker. But then Comrades Kanu Sanyal and Keshav Sarkar started visiting her village and talking about enforcing Tebhaga (a system of crop-sharing whereby the landlord gets one-third and the tiller gets two-thirds of the produce). Tebhaga was a powerful movement in the 1940s and 1950s, in many parts of North Bengal the movement had become victorious and the new formula of crop-sharing was already in force. The struggle now began in the Terai region of Darjeeling.

Shantidi remembers the way the Communist Party functioned in the village, “They initiated a night school. Kanu Babu and Keshab Sarkar used to teach in that night school. Many people used to go there to study. I too started going there regularly. Apart from studying various subjects, we used to discuss the problems of the village, the problems of the sharecroppers. Soon we started discussing political and organisational affairs as well.”

In 1965 Shanti Munda became a member of the Party. Organising village meetings, resolving loan-related disputes with landlords, collecting donations to organise weddings in peasant families – all this became the new routine of Shantidi’s life. Then came the turning points – the victory of the United Front government (the first non-Congress coalition government in West Bengal in which communists emerged as the biggest constituent) and Naxalbari.

“In February 1967, the United Front came to power,” Shantidi began to reminisce about the Naxalbari uprising, “and on 18 March we had a big peasant conference at Rambhola Jote. I still remember that meeting. Jogen Biswakarmakar (maternal uncle of the great Naxalbari martyr Babulal Biswakarmakar) was there as were so many other comrades whose names I don’t remember today. The conference gave a call for capturing all benami land. Krishak Samiti (peasant association) started freeing all benami land from the control of landlords and redistributing them among the landless poor. The police tried to protect the landlords but everywhere they had to retreat in the face of the united peasant power.”

Shantidi vividly remembers the run-up to the events of 24-25 May 1967: “While the police often had to beat a retreat, they always used to come back and try and terrorise the people. Male members of villages had to stay away to escape arrest. One day, the police molested a Nepali woman in a village. They also beat up the pregnant wife of Sainu Khariyar with the butt of the rifle. The baby in her womb died. She too did not survive.”

What exactly happened on May 24-25? Shantidi’s eyes lit up recalling the events of those days of uprising, “On 24 May, a police team raided Jharu Jote. Perhaps they had come to know about the presence of the leaders in the village. As soon as the news of the entry of the police spread, peasants and tea garden workers from all neighbouring villages rushed to the spot with all their bows and arrows and other domestic weapons. My little daughter was then only 15 days old and was tied to my back. I too ran with other women and encircled the police. The green field was full of people – nobody in all my generations had seen such a big crowd. Comrade Khokan Mazumdar was there in that struggle. Also present were Phani Master (teacher) and Lalsa Kherowar of Haldibari tea estate. An arrow struck Sonam Wangdi (the chief of the raiding police party) and he fell on the ground.

“The next day, I was very ill and did not go out. When the police again entered the village, women resisted. They snatched the rifles from the police. The police promised to leave if their rifles were returned. The women gave the rifles back and the police left only to stop after a little distance and start shooting at the people.” As many as eleven people (Comrades Dhaneswari Devi, Sorubala Barman, Sonamoti Singha, Simashwari Mallick, Nayaneswari Mallick, Samashwari Saibani, Gaudrau Saibani, Phulmoti Singha, Khar Singh Mallick and two children) died in that police firing.”
Comrade Shanti Munda went underground after May 25. “With my little daughter I shifted to Lataguri. I used to do organisational work during the day and hold meetings during the night. After five years I came back to Mallaguri. My son was very ill. Comrade Keshab Sarkar (Shantidi’s husband) had also gone underground after May 25 and I did not know his whereabouts. My mother-in-law and brother-in-law both died in short intervals. My house had been taken over; I also lost control over the small plot of land I hand. Those were days of great pain, I often felt very low, but I never stopped fighting, I never gave up my revolutionary politics.”

We ask Shantidi about Comrade Keshab Sarkar. “Keshab Sarkar was from a landlord family in Dinajpur district in East Pakistan. But the family had fallen on hard times, and he came to Siliguri with his mother and younger brother and took shelter in the house of Nripen Bose. Nripenbabu was a member of the Communist Party and he helped Keshab Sarkar to get a job in a plywood factory. But after he got involved in leading a strike Keshab Sarkar lost his job and in 1949 he became a fulltime Communist organiser and began to organise the peasantry in militant struggles. Matigada, Hatighisha, Buraganj, Kharibari, wherever struggles broke out Comrade Keshab Sarkar used to be there. He survived several attacks by the landlords, and spent long periods in jail. In 1978, we got him out of Siliguri jail on bail. He lived for another twelve years, but finally succumbed to the many ailments he had picked up during his rigorous life as a Communist organiser.”
‘When had you got married,’ we ask Shantidi. “That was in 1960. I was only 17, Keshab was almost 40! He used to come to our house. When people started commenting about his frequent visits, he resolved to marry me. Kanubabu arranged our wedding in the house of Dahru Rajbhar in Choupukhuria. The villagers were all present, but nobody from my family turned up. My father Digan Munda could never accept it. Keshab was from a different caste, he was a ‘bhadralok’. My father was worried that the adivasi community would not approve of this union. Out of anger and frustration, my father had even thought of shooting Keshab with an arrow. He wanted to go to court against our marriage. He was very fond of me. At times I think it was my father’s sorrow which claimed his life so early.”

We ask Shantidi about today’s Sebdolla Jote. There’s a buzz that it will become a ‘model village’. Shantidi bursts out laughing, “The other day the BJP MP Ahluwalia had come here with all his men. He told me, ‘Shantidi, Kanubabu wanted to make it a model village on the strength of the bullet. He failed. We are now going to do it through the ballot’. But what model village are they talking about? I can see them giving some money to the people to buy their support. The Vanvasi Kalyan Ashram (the RSS wing for the indigenous people) distributes a few sarees, they are organising dance troupes of young women who are expected to dance for some money when some VIP comes visiting. They are opening bank accounts for these dance troupe girls.”

“But what about land? What about jobs?”, Shantidi talks about the continuing eviction of the people, the malnutrition deaths and loss of jobs for tea workers: ‘Now they have brought machines to pluck leaves. For every 50 women plucking leaves, only 10 women now get work. The machines have eaten up the other jobs. Soon these machines will devour everything. … We need to fight again for land, for our jobs. The communist movement in India began around the same time as in China. Where is China today? And what are our conditions? We urgently need to unite and step up our movement. There is no other way out.”

We are interrupted by a sudden hailstorm and torrential rain. We left Shantidi’s little courtyard and ran off to protect ourselves. When we returned after the rain stopped Shantidi was standing with an umbrella under a tree. “Are you alright? I really got worried about you,” she said, visibly relieved to see us safe.