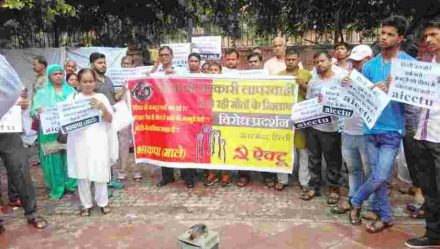 PM Modi launched his Swachh Bharat mission on Independence Day – 15 August 2014. In the weeks immediately before and after 15 August 2017, a series of Dalit men have died cleaning sewer lines in India’s capital city Delhi. In July 2017, it was estimated that 39 men had died in Delhi sewers in 100 days. The story is the same in all Indian cities.

The Swachh Bharat campaign, while unleashing draconian, coercive and violent measures on people in the name of ending open defecation, is making no effort to enforce the 2013 law forbidding manual scavenging – instead the campaign by encouraging the building of toilets with septic tanks are actually tacitly perpetuating and encouraging manual scavenging. The Central government has reduced funds for the self-employment scheme for the rehabilitation of manual scavengers from Rs 448 crore in the 2014-15 budget to Rs 5 crore in 2017. There is simply no attempt to enforce laws that ensure safety equipment for sanitation workers anywhere in the country. Unofficial manual scavenging continues to be rampant in the Indian Railways, run by the Central Government.

In Delhi, the Aam Aadmi Party Government also bears a large share of responsibility for its apathy towards ending manual scavenging. In the case of the latest three victims of sewer deaths, the AAP Government is adding insult to injury with the Delhi Jal Board washing its hands off the death by claiming that the victims were not employed by them officially. The practice of unofficially hiring labourers via contractors to clean sewers is rampant to avoid accountability for violation of the law against manual scavenging: on record, the Government will claim that all sewer lines are being cleaned by machines, while the Government winks at the dirty and dangerous practice of manual scavenging in those sewers.

Why does the Swachh Bharat campaign seek to coerce and terrorise people to give up open defecation? In a recent instance, children terrorised by a government team against open defecation in Bihar, nearly drowned in a pond as they sought to flee. Instead why does the Central Government and State Governments not use stern measures to ensure that Government personnel enforce the law against manual scavenging? 