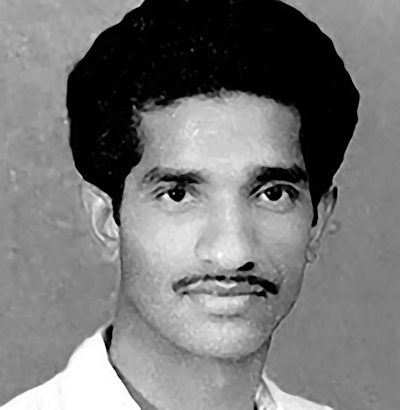 Arikkad Varghese was one of the young Naxalite revolutionaries organizing the oppressed adivasi people of Wayanad. The Naxalite movement in that area challenged the intense feudal oppression of adivasis who served as bonded labour for landlords.

In the course of the movement, an oppressive landlord Vasudeva Adiga and a suspected police informer Chekkoo were killed. Varghese was picked up by the CRPF from a shelter and shot dead in a fake encounter in 1970. Years later, in 1998, a police constable, P Ramachandran Nair blew the whistle on the fake encounter. He publicly confessed that he had shot Varghese on the orders of K Lakshmana, who had then been a deputy superintendent of police. He said that a gun had been planted on the dead body to stage the ‘encounter.’ Following this the Kerala High Court ordered a CBI investigation, and Nair’s colleagues confirmed his version. Though Nair died before he could testify in court, K Lakshamana was convicted on 28 October 2010 in a historic judgement by a special CBI court, based on the testimony of Nair’s colleague. Lakshmana was sentenced to life imprisonment and a fine of ten thousand rupees – a verdict that was upheld by the Kerala High Court.

Subsequently Lakshmana was freed in 2013 as part of an amnesty given by the State Government to convicts who were above 70 years of age and in poor health. Recently a writ petition was filed by Varghese’s brothers and sisters seeking compensation for the fake encounter. Shamefully, the LDF Government in March 2017 responded to this petition by telling the High Court that “Varghese was a notorious criminal involved in murder and dacoity cases in the Wayanad area.”

This statement by the CPIM-led LDF Government raises many questions. The payment of compensation by the State in fake encounter cases is based on the principle that the State must acknowledge crimes by its own functionaries and compensate victims of those crimes. Lakshmana, a police officer in uniform, had Varghese murdered in cold blood in a fake encounter – why is the LDF Government attempting to justify this crime?

By claiming that it is not bound to pay compensation since ‘Varghese was a criminal,’ the LDF Government is behaving exactly like right-wing Governments of Gujarat, Chhattisgarh or Madhya Pradesh whose leaders openly justified fake encounters by declaring that the victims were criminals/terrorists who ‘deserved what they got.’
More importantly, the CPIM and other LDF constituents should tell us if they consider the revolutionaries who annihilated oppressive landlords during the Tebhaga or Telangana movements and other communist-led peasant uprisings also to be “murderers and dacoits.”

The LDF Government’s brazen justification of the fake encounter of Varghese 50 years ago also reminds us that recently, the Kerala Chief Minister Pinarayi Vijayan trivialized a fake encounter killing of two Maoists in the Nilambur forests. Vijayan, instead of upholding the democratic norm that FIRs be filed in every ‘encounter’ killing and the police be prosecuted and asked to prove self-defence in court, declared that his Government “will not give importance to false allegations” and “will not take any steps which will hurt the morale of the police.” Even LDF partner CPI and even a senior CPI(M) leader VS Achuthanandan have criticised the Chief Minister’s attitude to this heinous custodial killing.