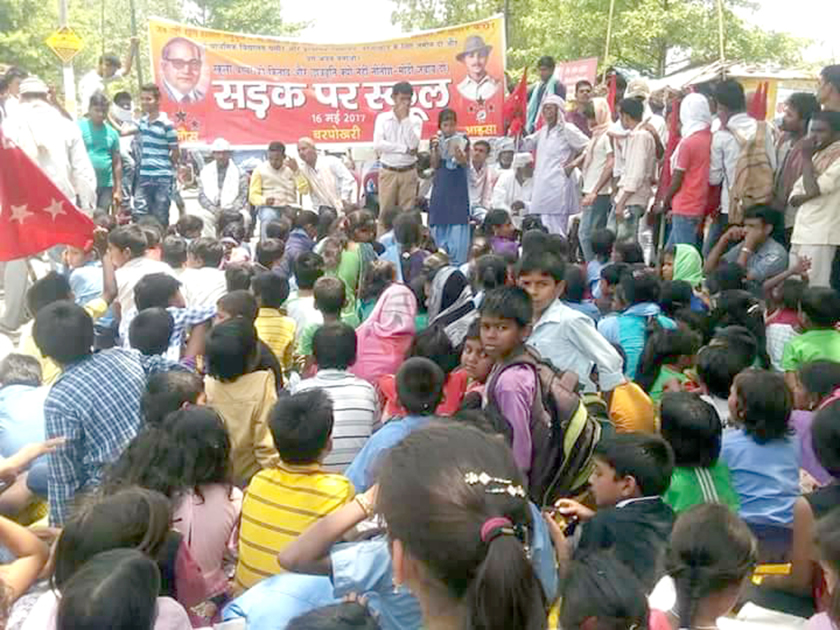 In Bihar, the state of government schools and hostels, especially for the marginalised has continued deteriorate. Protesting against this blatant violation of children’s right to free education by converting schools into camps and against the continued state of apathy towards providing better educational infrastructure and facilities in the government schools, AISA-RYA brought the school to streets and thereby reclaimed the streets for education and dignity for children of the poor and oppressed. The main slogan of this campaign has been – “Jab nahin rahenge haalaat anukool, to sadkon par hi chalenge school” (As long the conditions are not favourable, schools will be run on the streets). The protestors declared that as long as schools remain in bad conditions or are converted into police camps, the schools will continue to run on streets and as long as playgrounds are denied to children, the children will play on the streets. The movement is also aimed at strongly pushing the demands for (i) common school system, (ii) appointment of regular teachers, (iii) better infrastructure and against the increasing attempts to privatise education that are being taken by the Nitish government in the state and the Modi government at the centre.

Hundreds of students and parents came down to the streets and held ‘Sadkon Pe School’ holding red flags in hand, under the leadership of RYA Bihar State President Comrade Manoj Manzil. In times when substandard facilities and infrastructure have become norms in the case of educational spaces for the poor, this movement has brought several youngsters and children on streets and energised the movement for quality education for all. An immediate success of the movement was the allotment of land for school in Megharian village. AISA-RYA comrades have reaffirmed their commitment to now ensure that a proper school building soon comes up.