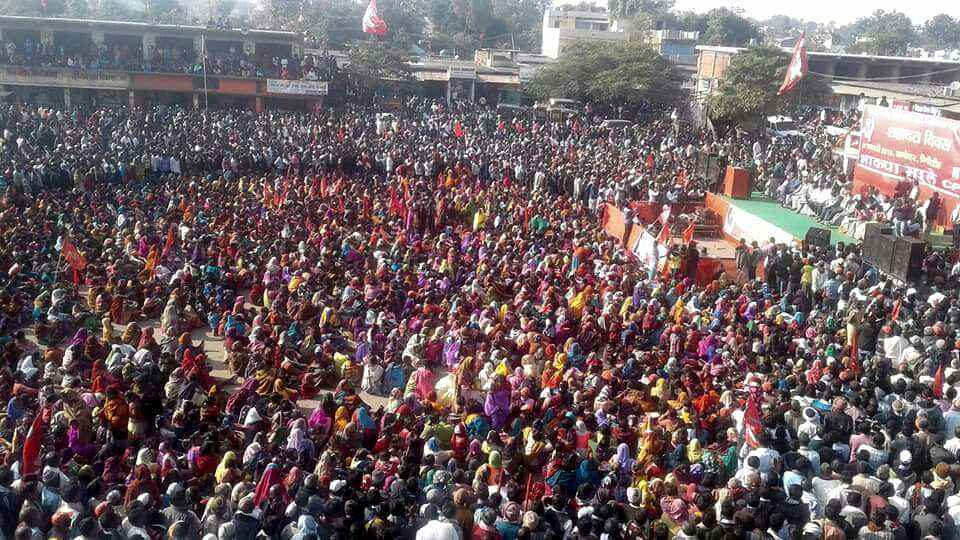 The 14th martyrdom anniversary of beloved people’s leader Com. Mahendra Singh was observed across Jharkhand as Sankalp (Pledge) Diwas to save democracy and save Jharkhand. A Sankalp Sabha was organized at the Bus Stand grounds in Bagodar, Giridih district which was attended by more than 20,000 people. Earlier, Com Mahendra Singh’s statue was garlanded at his native village Khambhara and at the Kisan Bhawan near the CPI (ML) District office. Large numbers of people in rallies from various blocks in the district as well as from neighbouring districts like Koderma and Hazaribagh flocked to the venue holding banners and flags and raising slogans. The meeting was presided over by PB member and District Secretary Com. Manoj Bhakt and conducted by State Committee member Com. Parmeshwar Mahto. The main speakers were CPI (ML) General Secretary Com. Dipankar Bhattacharya, former MLA Com. Vinod Singh, Rajdhanwar MLA Com. Rajkumar Yadav, Marxist Coordination Committee leader Com. Arup Chatterjee and other leaders.

Addressing the meeting, Com Dipankar Bhattacharya said that the country is going through the darkest times of communal hatred, and violence, and attacks on dalits, adivasis and minorities where the perpetrators are being protected by the police and the administration, the recent video-flaunted killing of an innocent Muslim worker in Rajasthan and the subsequent violence and hoisting of the saffron flag on the Udaipur High Court being only one case in point. The recent Press conference ‘Nafrat aur Hinsa Nahain, Haq aur Samman chaahiye” (We don’t want hatred and violence, we want rights and dignity) and “Scheme workers ki ek hi maang- paaki naukri, poora wetan aur samaajik samman” (Scheme workers have one demand- permament, job, full salary and social dignity).by 4 SC judges stating that the judiciary is in jeopardy is unprecedented and shows us that things have come to such a pass when instead of the people going to the courts for protecting democracy, the Supreme Court judges themselves have had to come to the people and ask them to save democracy. Now it is only the people who can fight fascism and save democracy and the Constitution. 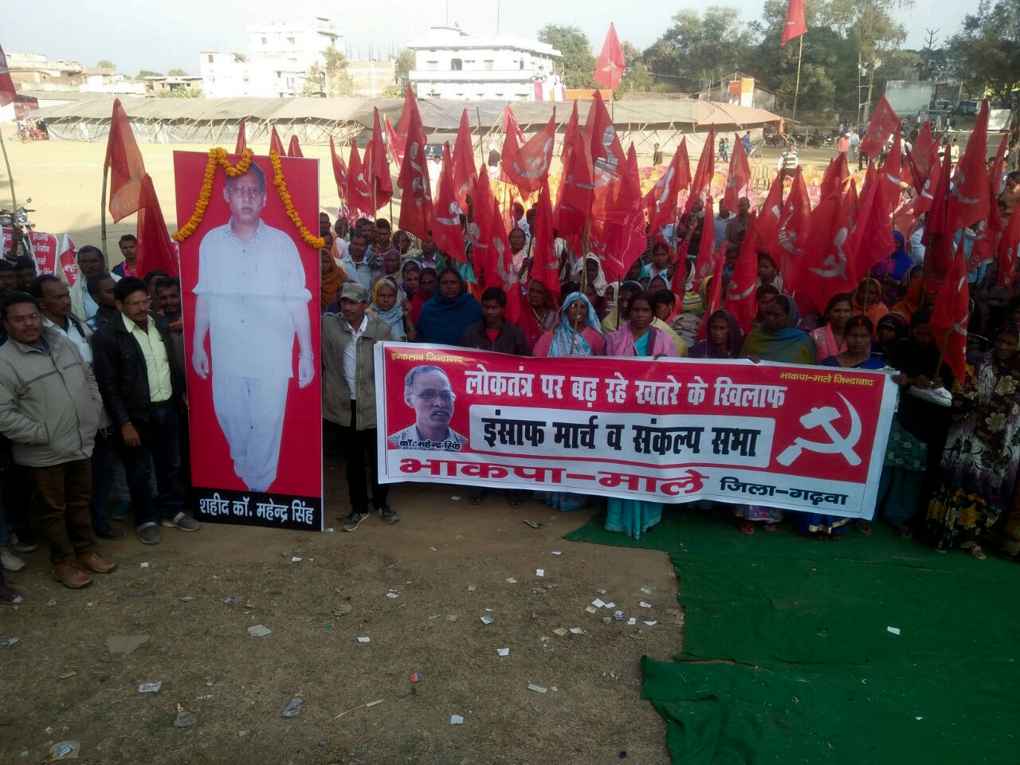 Com Dipankar further said that today the people have not only to face unemployment, starvation and skyrocketing prices due to demonetization and GST but they are also faced by the prospect of banks looting their hard-earned savings. The Jharkhand government had to back down from the amendments to the CNT-SPT Act but they have brought the Land Banks as a system for looting land from adivasis and benefiting corporate companies. The Jharkhand government which had promised to generate 16 lakh jobs annually is now giving the youth of Jharkhand an incentive to migrate and seek employment in other States. In other words, there are no jobs to be had in Jharkhand; Jharkhand’s land, water and forests will be given to corporate houses and thus corporate-fascist Raj will be established. He said that the people must unite and determine to fight and defeat the fascist-communal –casteist forces in the 2019 Lok Sabha elections. The Gujarat election showed that the BJP is fast losing ground in rural areas. There is also a question mark on the EVMs and we must sharpen the movement to demand paper ballots instead of EVMs. Com. Dipankar said that we will walk in the footsteps of Com. Mahendra Singh and stand fearless in the face of bullets and ready to extend cooperation to any forces fighting fascism and communalism. Com Vinod Singh and other leaders addressing the meeting said that the memory of Com Mahendra Singh inspires us to fight fascist forces, and called upon youth, workers, farmers, students, dalits, adivasis and all sections of society to fight and defeat the forces which want to destroy our democracy and our Constitution. 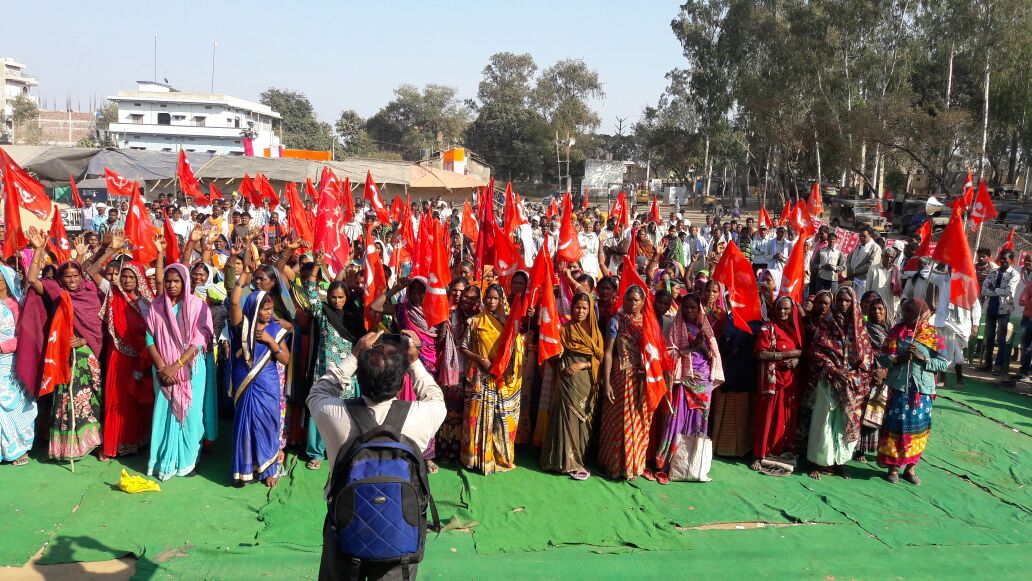 1. Raghuvar government should take responsibility for the death of Budhni Soren in Giridih district by starvation and action should be taken against the responsible officials. A district level dharna will be held on 25 January on this issue.

2. A high level judicial enquiry into the death of Judge Loya, in the light of the Press Conference by the 4 SC judges. Begin the process of judicial reforms to protect the autonomy of the judiciary.

3. CPI (ML) condemns the Modi government and BJP leaders’ attacks on Ambedkar and the Constitution and demands action against the culprits in the Bhima-Koregaon violence.

4. CPI (ML) condemns the attack by ABVP goons on Dr Balbhadra and Nitish Kumar at Giridih College and demands strict action against the culprits.

5. Strict action against those spreading communal hatred and violence, especially in the name of Gau-Raksha.

7. End loot of Jharkhand’s resources by corporate houses. Withdraw wrong domicile policy which is destroying the future of Jharkhand’s students and youth.

8. Equal pay for equal work and regularization for para teachers, ASHA workers, Sahiya and other honorarium and incentive workers.

9. Proper migrant policy for migrant workers and guarantee of dignity and proper wages for all workers including dalits, adivasis and women.

10. Present and pass the Women’s Reservation Bill in the current Budget Session of Parliament.

11.   Call to make the 10th Party Congress at Mansa (Punjab) a success and support people’s struggles against fascism. 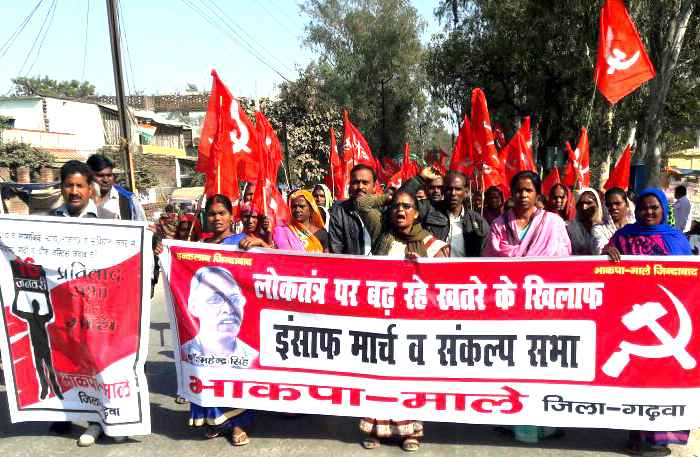