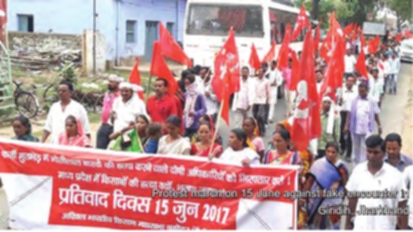 ‘They have murdered an innocent poor man’ – villagers of Dholkatta

CPI(ML) has rejected the state police department’s decision of CID inquiry into Motilal Baske’s murder in fake police encounter labeling it an eye-wash. The party is of the view that no impartiality can be expected from any investigation conducted under the police department which is itself involved in the murder. CPI(ML) Liberation reiterated its demand of judicial enquiry, judicial custody for the accused policemen, and compensation of minimum 50 lakhs, and government employment and education for the children of deceased.

A mass movement is taking shape for justice to Motilal Baske’s family with participation of Marang Buru Sanwta Susar Baisi and CPI(ML) as the main leading forces. Other opposition parties are also involved. The incident exposes the Raghubar government’s hatred against adivasis and poor people. Peoples’ participation in protest demonstrations and the Madhuban Bandh is challenging the Government’s silence on the issue.

‘Ye dau mee ta gaurib hod bechara pe goy kida, buru re dokane tehen gidre…’, Bishni Devi of Dholkatta village said in a rage about Motilal Baske’s brutal murder at Parasnath’s slope towards Nimiaghat, ‘the poor man was killed. He was nurturing his kids and family by running a shop on the crest. Why? What for?’

‘Hamni ke khana-pina bone he. pat-put beche hiye ta chale he. Bone pawo he to mare he ar ghare pawo he to mare he — bah re pulis’, Chhotki of the same village said, ‘we depend on forest for everything, food and drink. We sell leafage and other forest materials to earn our livelihood. But they thrash us in forest and in our homes too. They molest women inside the house! What type of police?’

‘We heard firing around 12 am. Couldn’t say exact time, maybe, it was 11.30 am up to 3pm firing continued. Half a kilometer away, south-east ward from our village. Nothing was visible due to dense forests’, said Sunil Hansda, a youth of Dholkatta. He added that the police did not allow them to go to the spot: ‘police forces had besieged our village and began to beat whoever was within their sight. Villagers were forced to keep behind shut doors.’

Motilal Murmu showed us the hole on the clay floor of his veranda caused by a bullet. The bullet’s fired shell was in his hand. He told us the police forces tried to break down the doors and hurled things on the tiled roof. Budhni Devi said she was grabbed by three men of the police; two were holding her left and right arms and the third had clasped her waist. They were trying to drag her inside the house; somehow she could manage to escape from their clutches. A deaf and dumb girl Janam was beaten brutally. Shyamlal Tudu, Rasiklal Murmu, Budhni, Chandmuni, Chhotki, Sarswati are others were beaten severely by the police. Villagers were of the opinion that Motilal was shot dead between 2 pm to 3pm near the village.

Rajesh Murmu, ward member of Dholkatta village was summoned the next morning by the Madhuban thana to verify the corpse in the thana. He along with Madhuban Panchayat’s Mukhia Nimal Turi identified the body of Motilal Baske.

The body was naked except for underwear. They saw wounds inflicted by firing on the body: a wound on the left temple just below the left ear, three injuries on each side from waist to upper stomach and a gash on each upper thigh. The size of wounds on the body suggested that firing was done at ease and close quarters.

Parwati Devi, widow of Motilal Baske was sent to take the corpse. She asked why her husband was gunned down. No one answered her question. She insisted again that her husband was running a small hotel and that sometimes also used to carry doli for Jain pilgrims. But the thana staff forced her to give her thumbprint on a plain sheet of paper.

Dholkatta village comes under Pirtand block and Madhuban thana of Giridih district, and the Parasnath hills separate the village from both Pirtand and Madhuban headquarters. So the only way to reach the village is via the Grand Trunk Road, 3 kms from Satkira More towards Paranath hills. A PCC road connecting to the GT road, electrification, an Anganbadi centre and a Middle School are the main signs of development of the hill village with 37 scattered houses and around 350 residents, all Santhal Adivasis.

But there is no arrangement for drinking water and people here depend on a water hole near the village amid rocks. Most of adult males are doli (sedan) carriers. They carry pilgrims from Madhuban up and down the hill – a height of more than a kilometer with a total distance of 4.1 kilometers. In the off-season they do other work. Adult women collect forest products and sell them in nearby villages or bazaars. Budhni Devi expressed her dissatisfaction with their conditions of life.

Motilal Baske ran a small dhaba (eatery) on Chanda Prabhu tonk, one of the highest crests on the Parsnath hills, since 2003. In this dhaba most of his customers are doli workers. He too used to ply the doli when there was a rush of pilgrims. He was a member of a registered union of doli workers and his membership number was 2065. He was engaged in two other jobs besides his business at Chanda Prabhu tonk. He had been granted home under Pradhanmantri Awas Yojna. Rs.26000 had already been credited to his account and he was waiting for rest Rs 32000 to be credited to complete the construction.

On 9th June 2017, like his other colleagues, he left the village at 2.30-3.00 am. Chanda Prabhu tonk is about 7 kms – a sharp climb. Before the monsoon he had to finish collecting firewood for his and his in-laws’ families. He had assured his elder son Nirmal Baske that he would return earlier for firewood collection. Only three or four shops are regular these days due to the off-season. According to his neighbor shopkeepers, he had closed his dhaba after 11 am and left for his home.

Individuals familiar with him said that he was regular at his business and very social in nature. He was a member of Marang Buru Sanwta Susar Baisi and had volunteered during the governor’s program recently at Madhuban on 28th February 2017. He had no criminal history registered in any thana. To avail the Pradhanmantri Awas Yojna’s grant a beneficiary has to pass so many verifications and recommendation that it is impossible for someone who is wanted by the police and absconding to evade arrest. It is clear on both grounds that he was not involved into any illegal activities let alone Maoist actions.

On 10th June the DGP D K Pandey rushed to Madhuban and echoed the local police’s claim to have killed a dreaded Maoist in a fierce encounter. He called upon forces to shoot other Maoists dead by firing at their foreheads. Awarding the Giridih Superintendent of Police Rs 1 lakh (such awards in encounter killings violates NHRC and Supreme Court norms) he announced, ‘Kill extremists, get rewards, there is enough money.’

Dholkatta’s villagers had joined a rally against amendments of the CNT-SPT Acts last month in Ranchi. Since then they had become targets of police ire. Last year on 22nd October an adivasi named Abraham Munda was shot dead by police while attending a rally in Khunti district against the CNT-SPT amendments. In Gola and Barakagaon, Jharkhand Police claimed two and four lives respectively in police firing while peasants were protesting the land grab by corporates.

Two and a half years of the Raghubar Government has proved to be a Police Raj – full of police firing, fake encounters, custodial deaths and communal lynchings. Adivasis are suffering full-scale police repression due to their resolute protests of amendments to the CNT-SPT Acts.