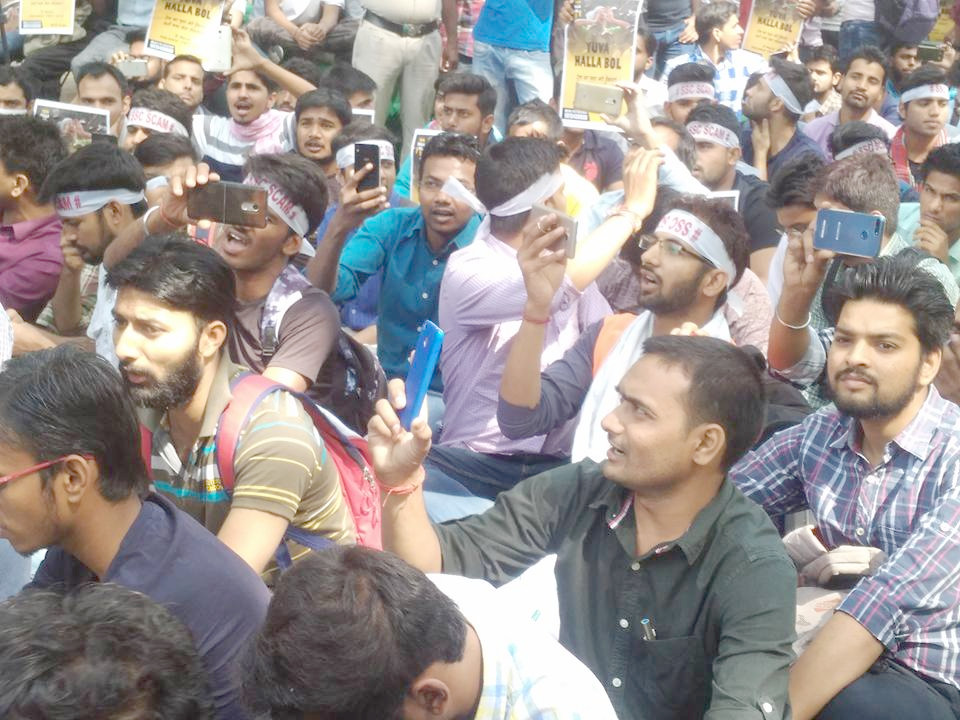 The Inaugural Convention of ‘Rozgaar Maange India’ was held at the Press Club on 11 March 2018. The campaign has been launched to highlight the extreme state of joblessness in country especially among the youth. The speakers at the convention ranged from journalists to leaders and participants of various movements happening across the country around the issues of employment. They included journalist Abishekh Chaubey, a participant in the ongoing SSC movement, Anupam Singh an activist for womens’ employment rights, Shweta Raj, leader of organization of ASHA health workers, Laxman Yadav, Ad Hoc teacher at DU and employment rights activist and Pankaj Srivastava, Editor- Mediavigil, but also a journalist who was sacked by CNN IBN for opposing biased coverage of Delhi elections. The meeting was conducted by Sucheta De, National President, AISA. The Rozgaar Mange India is a platform that seeks to run a sustained campaign on the state of joblessness in the country and also at the same time seeks to unite all other groups, individuals who are also carrying out movements for dignified and secure employment.

Inaugurating the convention Sucheta De said, ‘In November, 2013, at an election rally in Agra, the then PM Candidate Narendra Modi declared, “If the BJP comes to power it will create one crore new jobs.” And today, the government even wants to change the meaning of job itself! Employment by the Government means jobs with regularity, security and dignified minimum salary. But the Modi Government is hell-bent to destroy all these. This platform will launch movements across the country to put pressure on the Govt. of the day to address the problem of unemployment and will also hold the Modii Govt. accountable for the promises it made to provide jobs to the youth of the country’.

Abhisekh Chaubey a leader and active participant of the ongoing SSC movement said, ‘It is almost two weeks that thousands of students are protesting at Staff Selection Commission (SSC) Head Quarters in Delhi and at regional centres in different parts of the country against corruptions in SSC examinations. The SSC directly comes under the central government. And the onus lies with them to come out clean on this. The protesters are demanding that the Central Government must immediately set up an independent CBI enquiry on the entire process of SSC recruitment examinations. But instead of addressing the concerns of lakhs of youths, the Government has only offered false assurances, harassed and threatened them.’ He also showed documentary evidence at the convention as to how multiple hall tickets have been issued in the same name and how answer keys were leaked out when the exam was going on.

Anupam Singh, an AIPWA activist said, ‘lack of employment hits women the most because without a job the pressure to get married and lead a life in tending to a family grows, hence women are the worst hit when high rates of unemployment exists’. Shweta Raj leader of ASHA workers union said, ‘The ASHA scheme is a classic example of how the people of this country are being denied dignified and secured employment, the ASHA worker are not even paid minimum wages.’. Laxman Yadav an ad hoc faculty at DU highlighted the plight of over 4000 ad hoc teachers in the largest Central Universitiy in the country.

Pankaj Srivastava, editor of Mediavigil said that large sections of the media are not asking tough questions to the Govt. of the day, also the employment crisis occupies front pages of very few newspapers and primetime of very few channels, this is also evident from the way the SSC protests have been covered. The media has to highlight issues of employment and bring them into prominence at the same time hold the Govt. accountable on its election promises.

At the end of the convention a set of demands was released on behalf of the campaign. They are as follows

Following the campaign, the under the Rozgaar Maange India Campaign, regular JanSunwai’s are being held in different parts of Delhi including Mukherjee Nagar, Faculty of Arts, North Campus and other areas. Youth in these areas have been actively participating in these Jan Sunwai’s to share their situation in the light of growing unemployment. There is tremendous anger among the youth who say that the current government at the Centre has not only gone back on its promise of creating more jobs, it has also launched an attack on the existing employment opportunities by not allowing free and fair process of hiring.