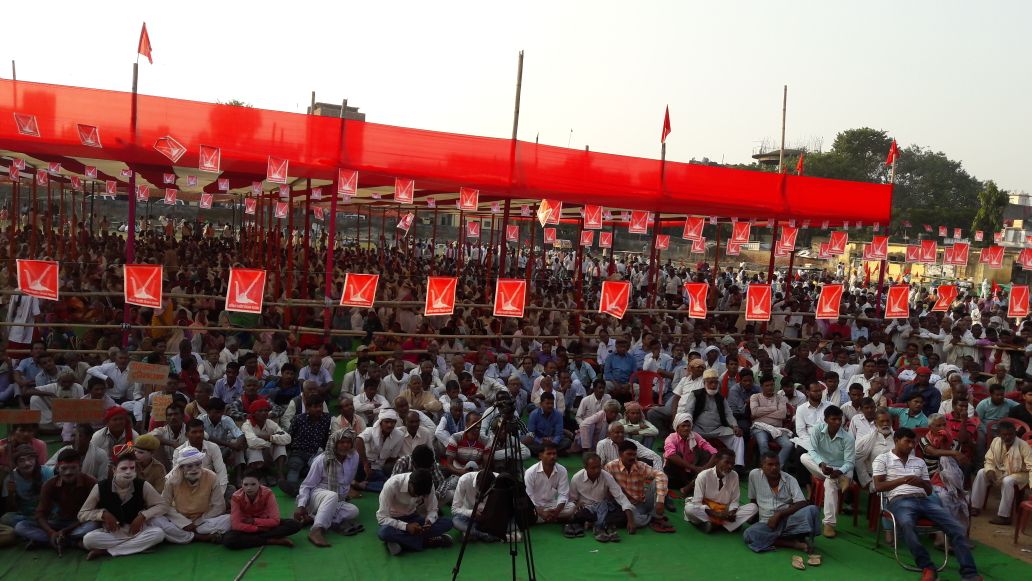 The current movement against the Bhangur Power Grid is being organized by this Samiti run by farmers from 15 villages. This movement came into prominence on 17 January 2017 when the police fired bullets on thousands of protesters killing 2 young farmers Alamgir Maula and Mofizul Khan. Meherjan Bibi, injured in the firing, also died later. This movement had started when the then TMC MLA and local strongman Arabul Islam (now Block Head) overrode the villagers’ protests and forcibly acquired land and constructed the Power Grid. According to the villagers, 500 armed goons and police used to be stationed outside the MLA’s to repress the protesting villagers. Relatives visiting the villagers were frisked by the MLA’s goons. People were not allowed to go out of the village. Within 4 months of the police firing the youth of the village left the village out of fear. 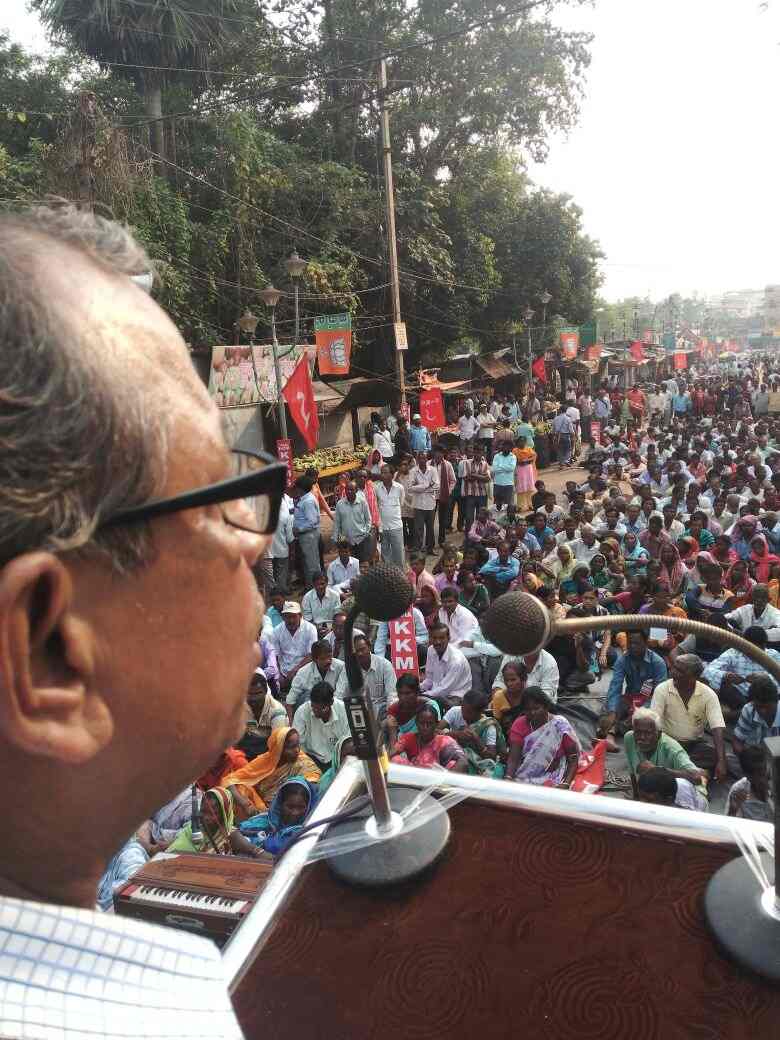 Machhi Bhangar with a population of twelve thousand is the most literate village in Bhangur Block. It has a majority of Muslim population. Many people here work in the army, teaching, and government service. 25% families are landless and 70% have less than 1 acre of land. Therefore, most people work for wages. As the name of the village suggests, fishing and fish-farming are a main source of work. The daily wage is Rs 250. Fish-farming and vegetable cultivation are the main occupations in neighbouring villages also. This village is a mere 30 km from the State capital Kolkata but the main road into the village is so bad and filled with potholes that one cannot drive at a speed of over 20 km per hour.

The villagers told the samiti that after the TMC came to power, people (especially those who vote for opposition parties) guns and bombs are used to threaten people and prevent them from reaching the polling booths to cast their votes. Now the TMC people capture booths and put in the votes in elections (from Panchayat to Assembly and Lok Sabha elections). Those who protest strongly are threatened in their homes with guns and bombs. The villagers say that during CPI-M rule there was bullying but not booth-capturing.

The Yatra entered Kolkata on 29 October. Kolkata is the only metro city today which offers refuge to the poor on its roads and enables them to eke out a living for Rs 25 per day. When the samiti members asked a sugar cane vendor the difference between the Communist rule and TMC rule, he said that now we pay Rs 300 a month to the police as extortion money and remain without tension, whereas during the CPM regime the Municipal Corporation used to catch us and take us away. The meeting was addressed by comrades Rajaram Singh, Kartik Pal, Hannan Mollah, Amal Haldar, Pradeep Thakur, Yogendra Yadav, Hafiz Ali Serani, Subhash Naskar, Shankar Ghosh, Sushant Jha, Bechu Dolui, Prabosh Panda and Annada Bhattacharya. A rally and meeting was also organized at Jhargram on the same day. 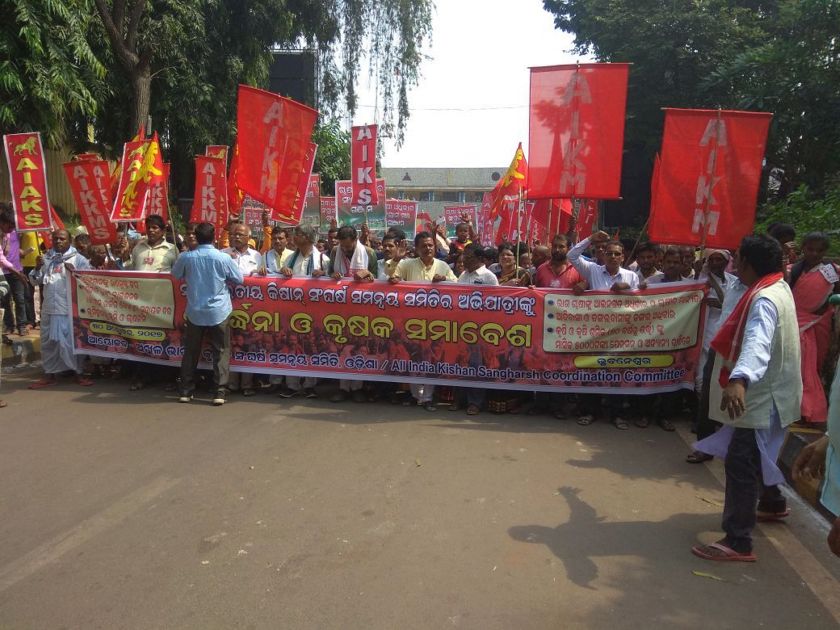 On 30 October the Yatra left for Bhubaneshwar, Odisha for the rally scheduled for 1 PM. There was a parallel meeting organized at 10 AM by the West Odisha Kisan Samanvay Samiti. In both the rallies, leaders appealed all to join the rally in Delhi on 20 November. The Samiti team received an enthusiastic welcome and the meeting at Bhubaneshwar was well attended by thousands of farmers and adivasis. 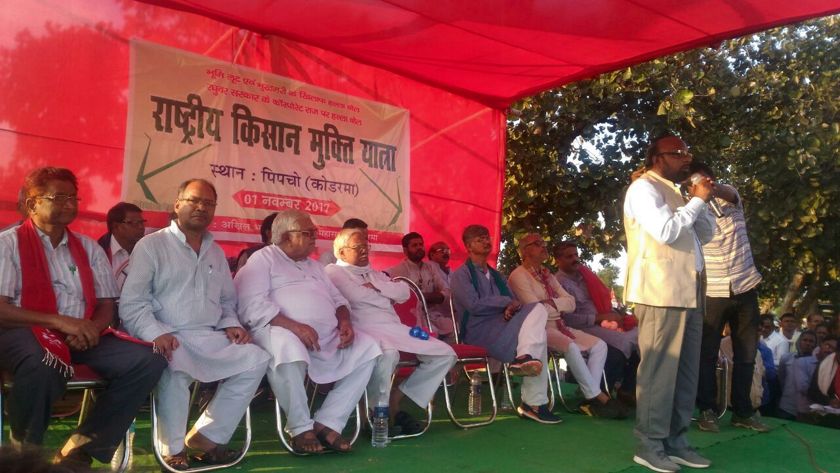 On 31 October the Yatra proceeded to Jharkhand and reached Ranchi via Ghatigaon, Kendujhar and Rimuli, crossing a small bridge at Jaitpur. The meeting was addressed by Com Rajaram Singh and Com Hannan Maula. On 1 November the Kisan Mukti Yatra reached Pipcho in Koderma district where a huge meeting was organized. Apart from the Yatra leaders, former MLA Vinod Singh and present MLA Rajkumar Yadav spoke at the meeting. The meeting was well attended by women, Muslims, traders, intellectuals and youth. The presence of young people at the meeting is a good sign for the farmers’ movement in Jharkhand.

From Koderma, the Kisan Mukti Yatra entered Bihar, visiting Bihar Sharif, Jehanabad, and Daud Nagar on 2 November. The Yatra was greeted by Comrade Ganesh Shankar Vidyarthi, senior leader of the All India Kisan Sabha on its entry into Bihar.

On 3 November, the Kisan Mukti Yatra held a massive Kisan Sansad at Tenduni village in Bikramganj. Former MLA and AIKM leader Arun Singh presided over the Sansad. AIKM GS Rajaram Singh, Kisan Sangharsh Samiti leader Dr Sunilam and other leaders addressed the Sansad. The Yatra then proceeded to meet the workers of the Cement Workers’ Union who were on a dharna at BIADA Jasoiya Mod, and then addressed a huge gathering of peasants at Piro in Bhojpur – among the biggest gatherings in the entire Yatra till now. Along with the Yatra leadership, the public meeting was also addressed by Tarari MLA Sudama Prasad, former MLA Chandradip Singh, young peasant leader Raju Yadav, RYA leader Manoj Manzil. The Yatra leaders also paid homage to the memory of Comrade Ram Naresh Ram, the late Bihar MLA and CPI(ML) leader of the Bhojpur peasant struggle.

The leaders of the Yatra paid homage to the memory of the historic peasant leader Swami Sahajanand Saraswati at his Ashram at Bihta on the banks of the Sone river, and reached the state capital Patna on 4 November, where a massive public meeting was held at the Gate Public Library. Along with the Kisan leader, former MP and AIARLA National President Rameshwar Prasad also addressed the public meeting. The CPIML MLA from Tarari, Sudama Prasad presided over the meeting. From Patna the Yatra proceeded to Begusarai, Darbhanga, Samastipur and Muzaffarpur. At Darbhanga, a motorcycle rally led by CPI(ML) PB member Dhirendra Jha greeted the Yatra. A huge mass meeting was held in Polo Maidan.

Throughout Bihar, the Yatra slammed the anti-peasant policies of the Modi and Nitish Governments.