The Jharkhand Party Office organized a flag hoisting on the occasion of the 100th anniversary of the great November Revolution. The great martyrs were remembered and honoured after the flag hoisting and it was resolved to take inspiration from the Russian Revolution to fight the present fascist-feudal-communal pro-corporate regime and its policies. 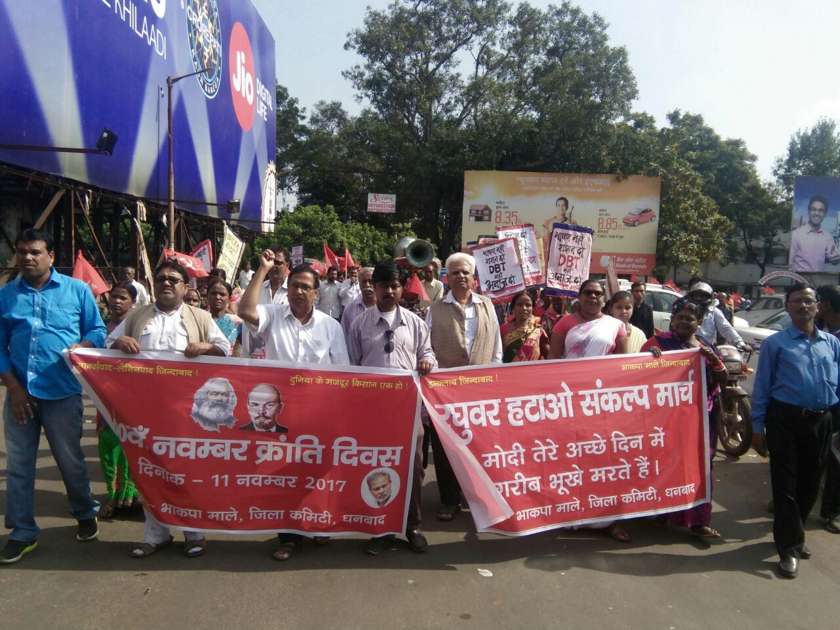 Meetings were also held at Garhwa, Dhanbad, Shyampur, Bagodar (Giridih District), Jainagar (Koderma), and Hazaribagh. The speakers at the meeting said that the Russian Revolution shook the entire imperialist and capitalist world one hundred years ago. This was the revolution that inspired Bhagat Singh and a multitude of revolutionaries across the world. Today it is a source of inspiration for us to carry forward the struggle of farmers and workers in Jharkhand against corporate land loot, communalism and fascism. A memorandum with 5 demands was submitted to the officials at Sirka Project (Hazaribagh), with the warning that if the Raghubar government did not end its anti-people policies the protest would be sharpened further.

Meetings to commemorate the centenary of the Russian revolution were also held at Bokaro Steel City, Kathara, Gomiya, and Devri (Giridih District).

In the rural areas flag hoisting and gram sabhas were organized at the village/tola level led by Comrades Shatrughan Sahni, Rabalak Sahni, Ramnandan Paswan, Bindeshwar Sah, Virendra Paswan, Rambali Mehta, Parshuram Pathak and others. A meeting and flag hoisting was also organized at Kudhni Block in the village of Dika Kumari who was a victim of the brutal rape and murder incident last year. The flag hoisting was done by Dika’s mother Com. Kusumi Devi.

Similar meetings were also held in other districts as well as in the state party office in Patna. 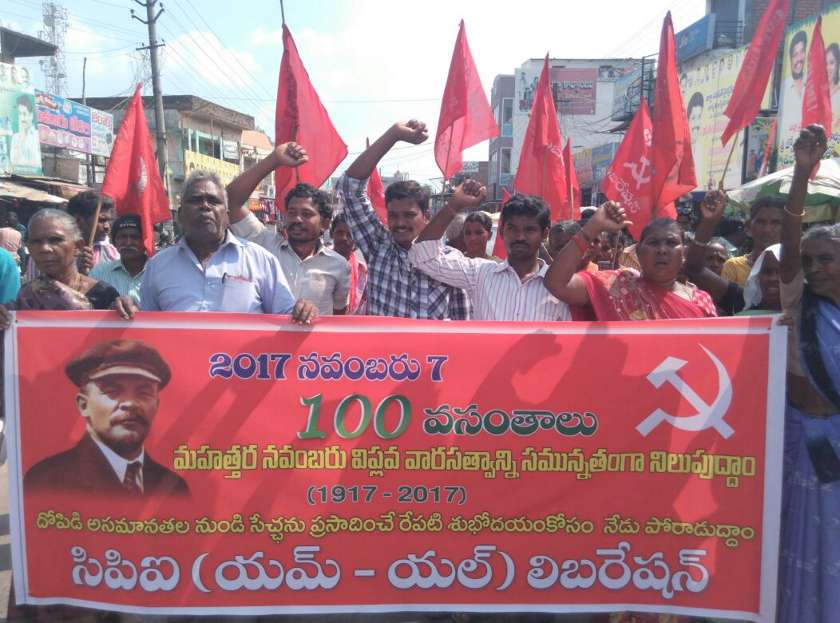 A rally followed by a meeting was held at Yeleswaram town in East Godavari district in Andhra Pradesh. The anniversary of the November Revolution was also observed at Jaggampeta in the same district. A public meeting was also organised in Mangalageri in Guntur district and the party leaders including comrades Ramdev, Bhaskar Rao, Hanumantha Rao and others addressed the gathering.

The 100th anniversary of the Great October Revolution was observed by party cadres in Puducherry UT with much enthusiasm. Party flags were hoisted in the state office as well as in places where party branches exist. Greeting the anniversary, banners were displayed in many places. In the same way AICCTU units hoisted flags at many places. In the evening a cadre meeting was held in the party office. The significance, and relevance and importance of Soviet revolution was discussed. The inspiring legacy of November revolution enthused the participants. Balasubramanian, Puducherry state secretary of CPIML and Balasundaram CCM were the speakers. Comrade Purshothaman presided the cadre meeting.