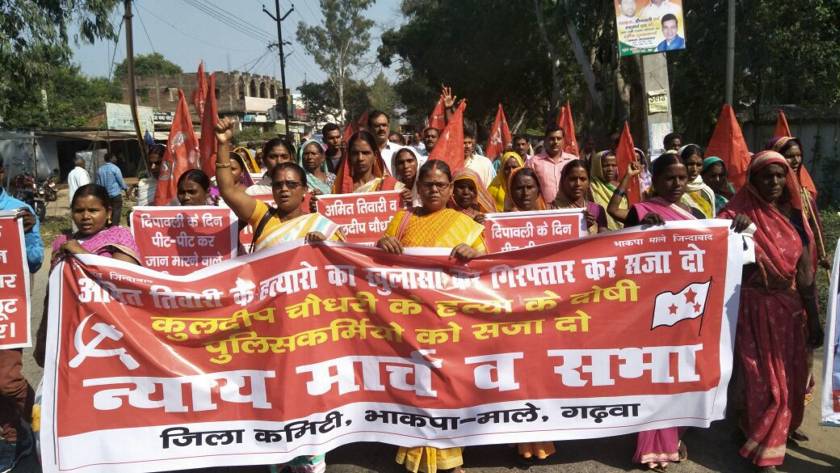 The CPI (ML) organized a condolence-cum pledge meeting on 28 October 2017 at village Garhwata to demand justice for Kuldeep Choudhury who was killed by the criminal connivance of Danda police in Jharkhand. It is to be noted that from Block level to District level, the entire state of Jharkhand is witnessing a rise in criminal incidents. Things have come to such a pass that organized crime is being committed in the very presence of the police. This is the 1000-day Development Model of the Raghuvar government in Jharkhand. The common people are being harassed and hounded without cause and the government of loot, lies, and crime is in place in the State as well as at the Centre.

The Sankalp Sabha resolved to escalate the movement against the current situation of crime, loot and oppression, and to continue the present agitation until the arrest of Kuldeep Choudhury’s killers Ishwar Dayal and Virendra Shukla and the 6 complicit police personnel. The Sabha demanded the dismissal of Danda Thana in-charge Gupteshwar Tiwari for terrorizing and harassing the common people, protecting the criminals, and giving false information to senior officials. The Sabha declared a District level campaign to expose those guilty of anti-people activities and the police-politician-middleman nexus oppressing the poor, farmers, and workers.

The meeting demanded Rs 15 lakhs compensation and a government job for the victim’s family. They also demanded a high-level enquiry into the entire incident from Thana in-charge Gupteshwar Tiwari’s appointment to the uncalled-for firing upon protesters which caused Kuldeep Choudhury’s death. It was resolved to hold a protest meeting on 30 October 2017 at Garhwa District HQ. The meeting appealed to all peace-loving people of the District to participate in the protest on 30 October and continue the struggle until the arrest and punishment of Kuldeep Choudhury’s killers.