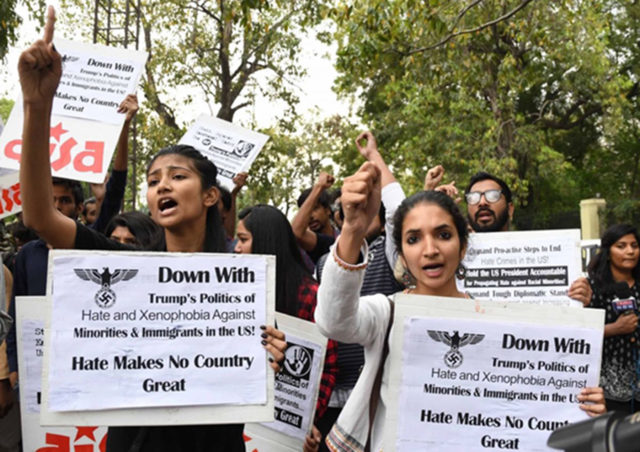 In the US, the election of Trump as President has ushered in a series of hate crimes against immigrants, with attackers unleashing verbal and physical violence against persons perceived to be ‘outsiders’ or ‘Muslims’ in the US. Several South Asians and Indians also have been at the receiving end of such violence.

An American civil liberties group, the Southern Poverty Law Center (SPLC) identified almost 900 incidents of racial harassment following Donald Trump’s win. These attacks can be called the ‘Trump effect’ since they flow from Trump’s own rhetoric against Mexicans, Muslims and immigrants.

Three persons of Indian origin were also victims of such attacks. Srinivas Kuchibhotla was killed on February 22 in Kansas, while his friend Alok Madasani, was injured when a racist white man fired at them shouting “get out of my country.” A white American man, Ian Grillot, was injured while trying to save Kuchibhotla and Madasani. Another Indian, Harnish Patel, was shot dead in South Carolina. Deep Rai, a Sikh who is an American citizen, was injured in a racist attack last week.

AISA held a protest at the US Embassy on 9 March against the spate of hate crimes. The Delhi Police did not allow the protesters to reach the Embassy. Speaking at the protest AISA President Sucheta De pointed out that ‘Hindus For Trump’ had campaigned for Trump and hailed his hate-speech – and that Indians in the US along with other immigrants were now reaping the harvest of the hate sown by Trump and his supporters. She condemned the muted response of the Indian Government and the silence of the Indian Prime Minister at these attacks, saying it was ironic that the BJP branded dissenting Indians as anti-national but itself did nothing to protect the rights of overseas Indians who are falling victim to hate crimes inspired by Trump who shares Modi’s ideology of hate. She pointed out how even in India, Modi himself stoked hatred towards non-Hindu immigrants and even Muslim citizens and dissenters, telling them to ‘go to Pakistan’ much in the same way as Trump supporters tell Indians in the US to ‘go back where you came from.’ She stressed the necessity to understand the “political economy of hate.” She reminded that just as anti-immigrant violence is being done in the name of the Trump slogan of ‘Make America Great Again,’ Bihari Hindus and Muslims alike are attacked in Maharashtra in the name of ‘making Maharashtra great.’ Modi does politics addressing adoring gatherings of NRIs but when NRIs are attacked he is silent, she said. She said Modi and Trump and other hate-mongers played ‘divide and rule’ – and the answer is to unite and fight back against capitalism and imperialism. She said that the message she and other protesters have for the US and India is that no nation can become great through hate – but through ensuring the rights and dignity of all its citizens. She demanded that US President Donald Trump be held “accountable for the climate of hatred and for propagating hate against racial minorities.”