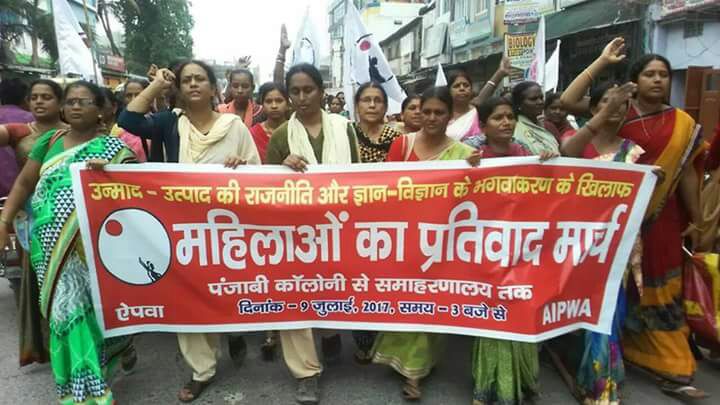 AIPWA activists from UP, Bihar, Jharkhand, West Bengal and Odisha attended a Zonal Workshop at Samastipur, Bihar on 8-9 July 2017, in which they discussed three topics – ‘Hindutva and the Women’s Movement’, ‘A Marxist Approach to Women’s Liberation’, and ‘Women’s Movement and the Law in India’. The participants in the workshop held group discussions on a range of commonly-faced questions relating to the Hindutva hate-campaign and widespread patriarchal ideas. A film ‘Salt of the Earth’ was screened, which also contributed to discussions on the need to make the question of social reproductive work central to trade union struggle, Left movements as well as the women’s movement.

The workshop was due to have been held at the Dr. Rajendra Prasad Central Agricultural University, PUSA, Samastipur, which recently became a Central University. But the newly appointed Vice Chancellor of the University, at the very last minute, denied permission to AIPWA to hold the workshop, saying that he could not allow ‘dangerous women like Kavita Krishnan (AIPWA Secretary)’ to come to the campus. The remarkable efforts of the AIPWA unit of Samastipur ensured that the workshop was nevertheless held successfully at another venue. But the participants of the workshop taught the misogynist VC a lesson by holding a spirited protest march against him and burning his effigy. AIPWA activists said it was a shame that the BJP Central Government was appointing such RSS elements as Vice Chancellors of Universities, who are afraid of the women’s rights movement and brand its activists as ‘dangerous’. Indeed, AIPWA activists aim to pose the gravest danger to custodians of patriarchy, caste and gender discrimination, and violence against women.