CCTV Should Have No Place In School Classrooms 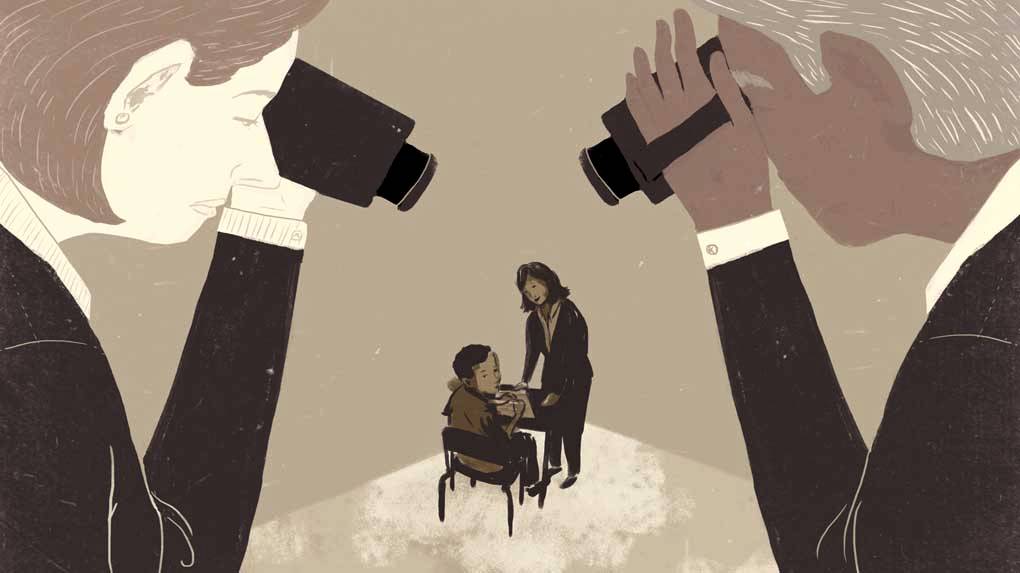 While AAP’s fascination with CCTV cameras is not new, this fascination appears to have taken a giant leap of faith with CCTV cameras now being projected as a panacea for all the challenges that government schools face in the national capital. In Delhi Chief Minister Arvind Kejriwal’s own words, providing parents access to CCTV footage in the classroom will “make the whole system transparent and accountable and would ensure safety of kids.”

Over the past few days, several activists of AAP have defended the installation of CCTV cameras in classrooms saying that this will ensure that teachers are not just present in the classrooms, but also that they come prepared for the class. Others have added that this is necessary to assure parents that their children are safe in the school premises. It is not just the parents but several other officers who will have real-time access to the CCTV footage, which in other words means that they would be able to receive live streaming of classroom interactions on their mobile phones through specially designed apps for the purpose. The irony of the massive expenditure that installation of CCTV cameras in all government school classrooms would involve was not lost on a principal of one such government school who on a TV debate on the issue rued the fact that even as the pleas for better infrastructure for students in terms of decent desks, fans, tube lights, toilets, well-equipped libraries and playgrounds went unheeded most of the time citing lack of funds, there appeared to be no such fund crunch for installation of CCTV cameras! As most government schools still await permanent appointments of teachers and quality academic infrastructure, the government must be asked to explain its decision to spend on CCTV cameras instead.

The concern regarding CCTV cameras, however is not restricted to the expenditure involved in installing them. The pedagogic concerns are far more alarming. The very imagination of a classroom that has CCTV cameras and mikes fixed in them appears nightmarish, irrespective of whether I try to imagine it from the location of student or a teacher. The very mention of cameras recording and streaming the classroom transactions live brings to my mind an image of a reality TV series where nothing appears to be spontaneous and each participant seems to be performing for the cameras. For a moment, try to imagine yourself as a teacher in a classroom that has a CCTV installed and whose recordings are being viewed live both by the school principal and parents. What kind of a pedagogic space can unfold in such a situation? Can a teacher feel inspired to experiment, considering that some experiments would succeed and some may even fail? Can a teacher feel free to encourage a passionate discussion or a participative group activity in the class, considering that the enthusiasm generated will make her look as less in ‘control’ of her class? Will a teacher dare to pose to her students a problem that may be challenging for them considering that an absence of a quick and correct response from the students may make her appear ‘ineffective’ in eyes of those watching? Will a teacher ever be able to relax and take a pause or share a joke, a song, a story that may not always have a direct bearing to the contents of the syllabus, fearing that she may be seen as wasting time or engaging students in purposeless activities? Can a teacher be seen as encouraging students to critically reflect on a superstition or a social practice entrenched in patriarchy or casteism, knowing that some parents who still hold on to these are watching her!

The safest option for teachers and children would then be to create a classroom where a teacher ‘teaches’ and students ‘receive’-silently, obediently, observing discipline at all times and responding only when asked to and in ways that have been already determined. There will be no questioning of status quos. Such a space can only be transmissive, never ‘transformative’ and hence never ‘educative’!

For years, philosophers and practitioners of critical pedagogy have struggled to establish that a one-sided transmission of information by a teacher to a bunch of empty vessel like students is not education! It took educationists in India nearly 58 years to establish that education is a process of active co-construction of knowledge between teachers and students[1] . An inspired teacher attempts to create educative experiences for the students and mediates the participation of students leading to co-construction of knowledge. Such a classroom inspires a student to think, question, critique and become a self-motivated learner for life equipped with cognitive tools needed for learning. A classroom that thus emerges will occasionally assume a reflective silence and on most other occasions it may be characterized by a noisy participation and exchange of ideas. Such a classroom has space for errors and learning from errors, both for teachers and students. It facilitates sharing and receiving of difficult individual and social narratives in a space that is safe. Importantly such a classroom cannot be created on mistrust, under the watchful eyes of a CCTV camera and those who may not always know what constitutes a good pedagogy.

It is important at this juncture to examine some of the key assumptions that underlie a reliance on CCTV cameras to make classrooms safe and teaching process transparent and accountable.

First, the very notion of CCTV cameras in classrooms and the real-time access of the same to parents is based not only on a complete mistrust of teachers Link textbut also on an unquestioned trust on a child’s familial space. There is an assumption that teachers are inherently to be mistrusted and the parents to be trusted. Such an assumption belies several real-life instances where empathetic teachers have created a safe space for students to share their narratives of violence and discrimination at hombutton]  National Curriculum Framework 2005 advocated a constructivist framework in which students were to be seen as active agents in their learning process.[/buttone and neighbourhood. There are innumerable instances where female students have sought the assistance of school authorities through teachers to prevent their parents from getting them married while they are still in school. Stories of child sexual abuse and various forms of physical and emotional violence emanating at home have sometimes found an articulation only through sustained attempts of a sensitive and an observant teacher who understands child behaviour and is alerted when it deviates from expected.

Enough classrooms have also become the safe spaces for children to voice their own aspirations and dreams which are very different from what their parents want to impose on them. Have we not heard of stories of students’ committing suicides after failing exams, unable to face the demanding parents! This is not to suggest that teachers and the classroom spaces enabled by them are always sensitive and receptive and that nothing can go wrong in a classroom, but to imagine that watchful eyes of parents is what it will take to set the erring teachers right, is also not a fair assumption.

Second, the dependence on CCTV cameras to make schools safer and transparent also reveals the complete lethargy or unwillingness of the proponents of this idea to invest in quality teacher training programmes and to also ensure that teachers find meaning in their jobs by not burdening government school teachers with non-teaching and often non-school related tasks. If we feel that teachers today are not engaging in quality teaching or are becoming insensitive or indifferent to children, then it is an extreme abdication of responsibility to try and address this challenge by installing cameras instead of providing infrastructural, pedagogic and other needed support to the teachers.

It is extremely unfortunate that over the years, the major responsibility of teacher preparation has been left in the hands of private B.Ed. shops opened in various nooks and corners of the country. These shops have no interest in creating conceptually strong, pedagogically sound and socially sensitive teachers. They are happy selling the degrees at exorbitant prices and the teachers thus produced can hardly be expected to be invested in creating meaningful educative experiences for students. The CCTV cameras far from pushing teachers to be become good and accountable, may only ending up pushing them into becoming cleverer!

Rethink The Concept Of ‘Security’

Third, the very idea that security can be ensured by surveillance especially in an educative space is ignorant, escapist and doomed to fail. Pradyuman (the child killed in Ryan International School in Delhi) was not killed in a classroom but in a school toilet, a space that may still hopefully escape peering eyes of a CCTV camera. When I think of his murder I shudder not at thought that there was no CCTV camera in the toilet, but ‘if’ the present account of the murder shared by the police is true, then at the thought that to a young student nearing his adulthood, the home, the school and the society failed to teach the value of a human life. If indeed this account is true and it was the fear of a parents-teachers meeting that led him to do this, then this fear could not have been caused by an ‘evil’ teacher alone, but more likely by parents who perhaps would have responded to the teachers’ report of him by inflicting further violence on him – physical or emotional. While this again poses question on whether parents’ watchful eyes can albutton]  National Curriculum Framework 2005 advocated a constructivist framework in which students were to be seen as active agents in their learning process.[/buttonways be relied upon to ensure safety, there is another urgent concern at hand here – having the courage and will to undertake the difficult task to instil values of empathy, care and reason in both teachers and students. Efforts are needed in the direction of developing teaching practices and curriculum that will help students become people who can recognize another’s physical, emotional, mental boundaries and respect them.

Lastly, if we imagine school education to be something more than a process of imparting information and certifying the acquisition of information accumulated over years, if we imagine education to play a transformative role in a society that is sharply hierarchised and unequal, if we see in education the promise to stem out roots of bigotry, prejudices and unreason, then educational spaces will have to be spaces where honest dialogues are possible. Stemming them out require frank and patient spaces that are non-judgmental and empathetic. These cannot be spaces rigged with mikes and cameras where participants only perform under the watchful gaze of a camera.

Educational spaces should encourage in us self-reflexivity – an ability to examine our own actions, the underlying assumptions and their impact in a larger relational context. CCTV cameras however, can only encourage us to be cautious ‘for the while’ the other is watches us! 

Note : 1. National Curriculum Framework 2005 advocated a constructivist framework in which students were to be seen as active agents in their learning process.