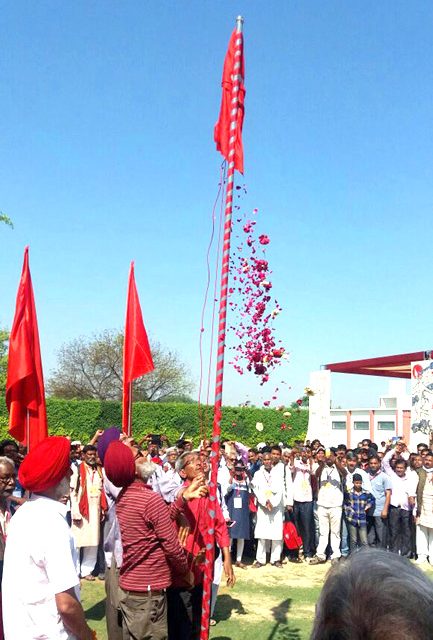 (Tributes paid to martyrs and departed leaders and progressive personalities at the Inaugural Session of the 10th Congress, CPI(ML), Mansa, 24 March 2018)

This house salutes the legacy of Karl Marx in his 200th birth anniversary year.

Since our 9th Congress, our party and people’s movements in the country have suffered very heavy losses. We have also lost many iconic Left and anti-imperialist figures all over the world. In this period, with the rise of fascist forces in India, there has been a spate of hate crimes, political assassinations, and acts of state violence that continue to claim lives.

This house expresses deep grief at the deaths of 39 Indians who were killed by the ISIS in Iraq, and condemns the callous manner in which the Government of India concealed the information and then released it in Parliament without first informing the kith and kin.

This house mourns the farmers who were forced to commit suicide due to agrarian distress. This house salutes the farmers killed in police firing while agitating for their rights in Mandsaur, Madhya Pradesh and Bhangar, West Bengal; the peasants and adivasis killed in police firing fighting eviction in Jharkhand and Assam; those killed due to demonetization; the victims of starvations deaths in tea gardens and due to Aadhaar exclusions; and the victims of communal violence, communal lynch mobs, and caste atrocities, and demands justice for them all.

This house salutes CPI(ML) leader Comrade Zafar Hussein Khan of Pratapgarh, Rajasthan who was killed by a mob of Government officials for resisting their attempts to harass and humiliate poor women defecating in the open. This house salutes Comrade Mariappan of Tamilnadu, who was brutally beheaded by members of the Hindu Munnani.

This house mourns Dika Kumari, the Dalit girl killed in her school Bihar and demands justice for her. This house salutes the legacy of Ambedkarite student activist Rohith Vemula, whose life was claimed by institutional murder, and demands justice for him. This house salutes Professor Kalburgi, Narendra Dabholkar, Comrade Govind Pansare and Gauri Lankesh – all assassinated by saffron terrorists for their work as rationalists, anti-communal activists, writers and journalists. This house salutes the many journalists killed all over the country for courageous reporting, including Santanu Bhowmick and Sudip Datta Bhowmick of Tripura.

This house mourns those who were killed in train accidents and railway station stampedes as a result of the callous laxity in rail safety norms. This house mourns the victims of natural calamities including floods and cyclones in various parts of the country.

This house expresses deep respect for the late Fidel Castro Ruz, the iconic leader of the Cuban revolution; for Nelson Mandela, leader of the struggle to liberate South Africa from apartheid; and for the revolutionary hero of Viet Nam General Giap under whose military leadership the fighting forces of Viet Nam had inflicted crushing defeats on the armed forces of France and USA. These fighters were among those who left us in the intervening years since 2013.

This house celebrates the life and work of the American folk music singer and activist Pete Seeger, and the Latin American public intellectual and conscience-keeper of the world, Eduardo Galeano; the great Indian actress Zohra Sehgal who passed away at the age of 102; and the great physicist and cosmologist Stephen Hawking.

We mourn the untimely and sudden death of journalist and Marxist intellectual Praful Bidwai, and the writer and activist Mike Marqusee.

The passing of revolutionary poets Nabarun Bhattacharya, Viren Dangwal, Ramashankar ‘Vidrohi’, and writer Madhukar Singh was a great personal loss for us – they were closely associated with the revolutionary Left movements in the country.

Since our 9th Party Congress, we suffered the heavy and untimely losses of two of our leaders – Politburo member Comrade Swapan Mukherjee and former Central Committee member and AIPWA President Comrade Srilata Swaminathan.

Comrade Shah Chand ‘mukhiya’ – popular leader of peasant struggles in Bihar, incarcerated in jail after being convicted under the lapsed draconian anti-terror law TADA, passed away. Comrade Baleshwar Choudhury, convicted in the same TADA case, also passed away, as did Comrade Indal Mehta, also unjustly convicted and jailed in a separate case. We remember these comrades with grief and rage, and determination to continue their struggles.

We remember Comrades Doug Lorimer and John Percy, leaders of Socialist Alternative, Australia, who enjoyed warm friendships with many of us, with great affection and respect. We miss the valued friendship and comradeship of Canada-based Marxist academic and activist Dr Daya Varma, who attended every Congress of the CPI(ML) between 1982 and 2002.

We pay our respects to Comrade Ganga Prasad, who, till his last days, was a familiar presence in Lucknow running the Lenin Pustak Kendra (Book Shop); to senior CPI (ML) leader Comrade Ramesh Chandra Pandey (affectionately known as Baba); to Comrade Mulkraj who was one of founder members of the CPI(ML) in Delhi and also founder of the All India General Kamgar Union, which is one of Delhi’s oldest functional Unions; to Comrade Pan Singh Jaggi of Uttarakhand and to Comrade Virendra (member of the cultural team Jagaran from Jharkhand). We pay respects to Comrades Haricharan Teli and Ishaq Ali (veteran comrades and also fathers of martyr Comrades Gobinda Teli and Akkel Mian respectively of Tripura), and to Comrade Kamaleshwari Devi (wife of Comrade Jagadish Master).

Let us rise and observe silence in memory of all those who have given up their lives for the cause of revolution, democracy, anti-fascist resistance; equality and peace.