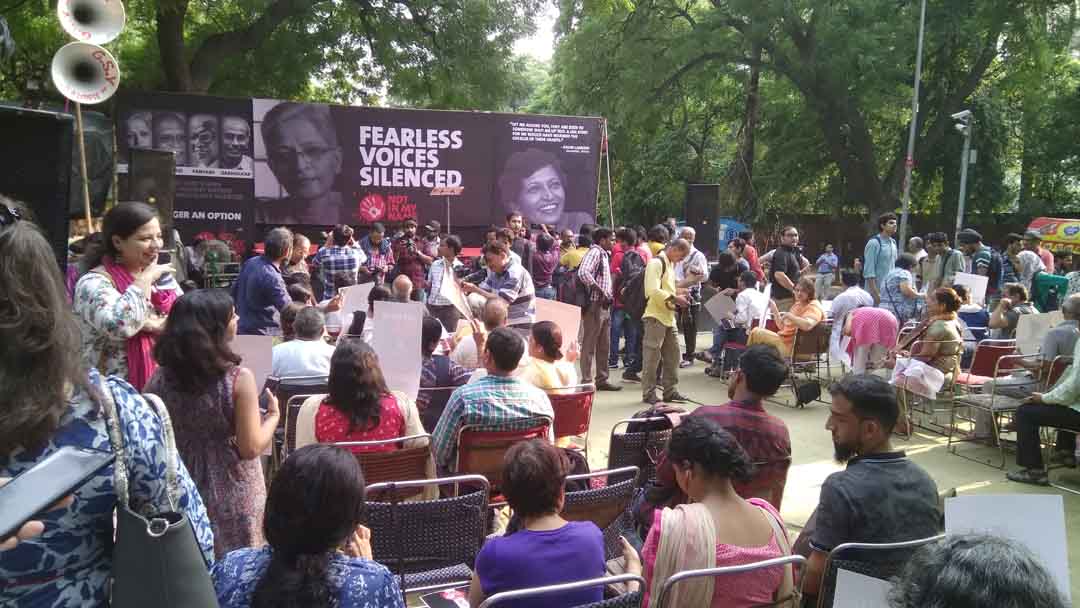 Fearless journalist and activist Gauri Lankesh was assassinated in Bengaluru on 5 September evening when she was about to enter her home in Rajarajeshwari Nagar after finishing her engagements for the day. As editor of the widely read Kannada weekly Gauri Lankesh Patrike, Gauri was a powerful voice against communal hate, caste oppression and all kinds of injustice. She was a tireless campaigner for social justice and human rights. On the day she was killed, she had earlier attended an anti-communal convention. Her last editorial was against the phenomenon of fake news and its systematic use by the Sangh brigade to sharpen communal polarisation and prejudice and mislead the public.

The manner in which Gauri Lankesh was killed bears close resemblance to the assassinations of well known rationalists and scholars Narendra Dabholkar, Govind Pansare and MM Kalburgi in the recent past. The investigation in these previous cases has pointed to the involvement of one Sanatan Sanstha, a Goa-based Hindu supremacist group; most of the key suspects are still absconding.

In the case of Gauri Lankesh, even as the news of her assassination stunned the whole country, the Sangh-BJP troll army began an obscene celebration in social media. Even I&B minister Ravishankar Prasad had to face the wrath of these elements for criticising this social media celebration. And now even as the Karnataka unit of the BJP has sent a legal notice to eminent historian and writer Ramchandra Guha for mentioning the possible involvement of the Sangh brigade in this assassination, Karnataka BJP MLA Jeevaraj has said that had Gauri not been vocal against the RSS she would have been alive today!

Gauri was quite alive to this danger. BJP MP from Dharwad, Prahlad Joshi and his personal secretary Umesh Dushi had slapped defamation cases against her in connection with some stories published in her journal in 2008 and in November 2016, she had been convicted by the Judicial Magistrate of Hubbali in north Karnataka. She had challenged this conviction in the higher courts. The BJP had sought to use this case to try and silence her, and even use this example to intimidate journalists across the country. Gauri had carried on undeterred. She knew that the murder of Kalburgi was also a message for her. Speaking to the website Newslaundry in November 2016, she had observed that ‘in Karnataka today, we are living in such times that the Hindutva brigade welcomes the killings (as in the case of Dr M M Kalburgi) and celebrates the deaths (as in the case of Dr U R Ananthamurthy) of those who oppose their ideology, their political party. I was referring to such people because, let me assure you, they are keen to somehow shut me up too.’

Gauri was also involved in a running battle with the forces of bigotry and caste oppression. She would passionately invoke the egalitarian inspiration of Vasavanna and Ambedkar, and boldly resist the Sangh Parivar’s design to appropriate these icons and subvert their legacies. Prof. Kancha Illaiah has described Gauri as the modern Akkamahadevi of Karnataka after the renowned 12th century female poet of the Veerashaiva Bhakti movement famous for her Vachana poems. With her multifarious activism and fearless journalism, Gauri Lankesh will go down as a great martyr who has laid down her life for the cause of freedom and democracy, social justice and communal harmony.

While saluting the ever inspiring legacy of Gauri Lankesh, we must see to it that her martyrdom becomes a decisive blow to the fascist design and offensive of the Sangh-BJP establishment which is celebrating her killing. Like communal riots and lynch mob violence, the culture of killing ideological opponents has been integral to the Sangh’s history. It is instructive to remember at this juncture how the Sangh’s journey had begun in independent India with the assassination of Gandhi. At that juncture the Home Minister of the day, Sardar Patel had held the RSS and the Hindu Mahasabha squarely responsible for the creation of the atmosphere in which the ghastly tragedy of Gandhi assassination could take place. Consequently, the RSS was banned.

Seventy years later, the crucial issue once again is to address and transform the environment in which the serial killings are taking place. In a different political climate, the RSS and its affiliates would have been banned, but today with the BJP in power the RSS enjoys utter impunity. The battle to bring the killers of Gauri Lankesh to book and to confront those who have emboldened them is therefore much more difficult today. Despite this, there are encouraging signs that the Indian people are determined to defeat the fascist threat and defend democracy, ranging from the powerful protests across the country in response to Gauri Lankesh’s murder to the recent emphatic verdict delivered by the JNU students against the Modi government’s war on JNU and higher education. To consolidate and extend this resistance to fascism is the urgent task now facing all progressive forces in India.