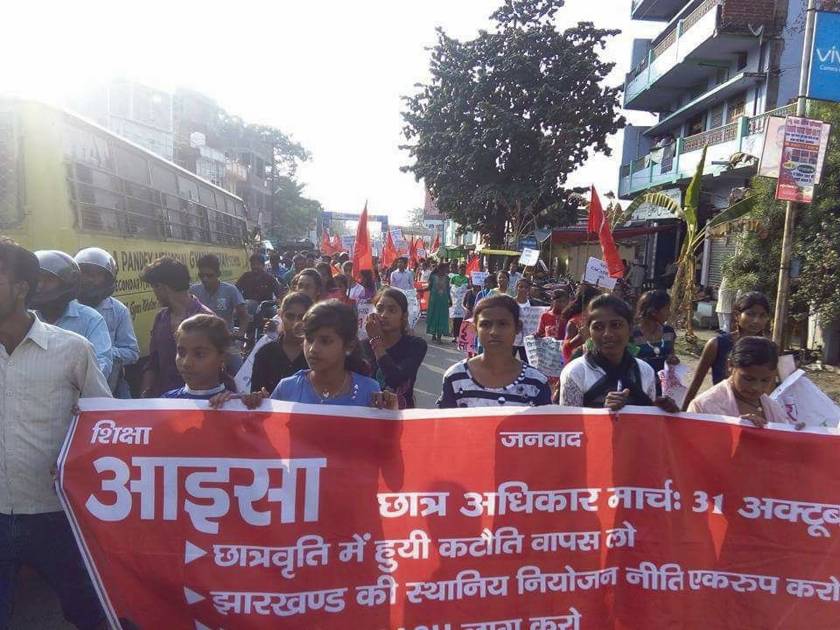 AISA and RYA will start a student –youth yatra beginning from Chandigarh on 7th November. The Yatra will go through the states of Delhi, UP, Bihar, Jharkhand and culminate in Kolkata on the 21st November.

The yatra is being organized at a time when the Narendra Modi government has completed three years term in power. What has unfolded for the student youth in last three years is a regime of push out from opportunities of education and employment. A government that came to power promising 1 crore new jobs every year has in reality delivered lowest job growth in last eight years. If in formal sector number of jobs reduced by 70 lakh in 2016 alone, demonetisation has caused havoc in the employment scenario of informal sector. The reality of much touted Make in India is such that massive lay off is happening in white collar jobs in IT sector as well. A policy of fund-cut, seat-cut, NET-cut, fellowship-cut and fee-hike is being imposed in education. While the education budget got reduced to 3.65% of the total budget in 2016-17 as compared to an already minuscule share of 4.57% in 2013-14, tax exemption too corporates reached a record high of 83,492 crores in 2016-17 itself. We are seeing our banks starving as loan amounting to 13 lakh crores given to big corporates have been declared as unrecovered bad loans. And these are same time when Junaid, Pehlu, Akhlaq, Zafar are being killed. When accused in Pehlu’s murder are being acquitted and state backed lawyer is supporting the accused in Junaid’s case. Communally motivated debates over taj mahal and gau raksha are being thrown at us.

At this juncture AISA-RYA has appealed the student-youth of the country to join the Yatra and raise the following demands: