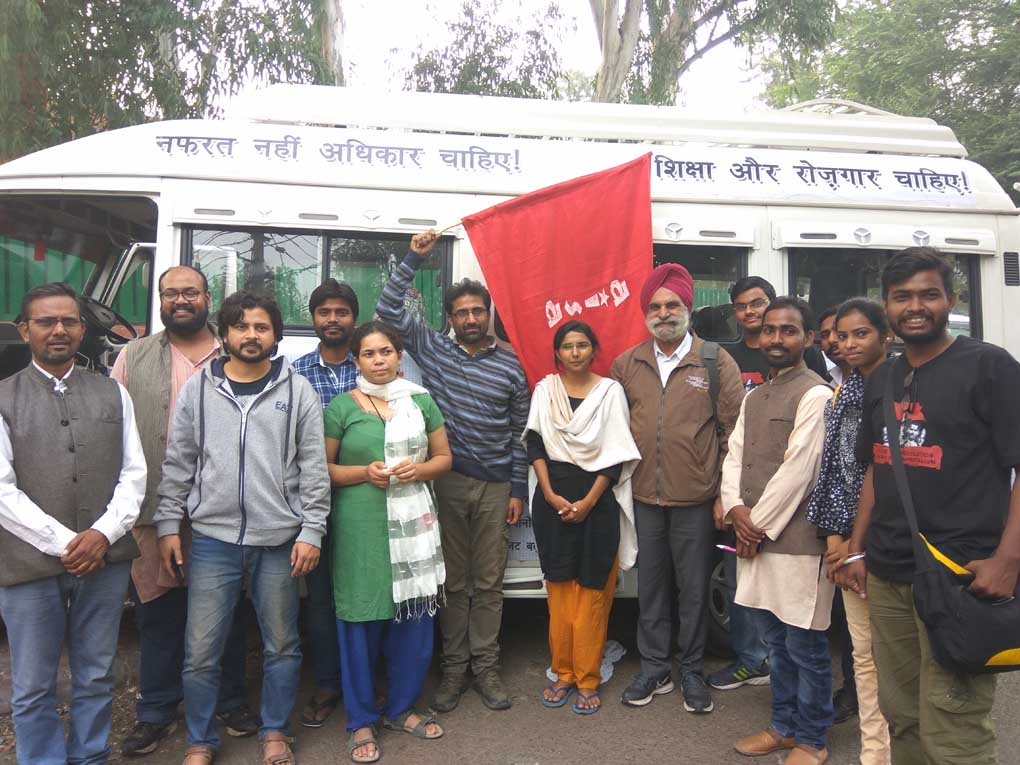 On the 7th November, the 100th year anniversary of the October Revolution in Russia, AISA-RYA’S Student Youth Adhikar Yatra started from Chandigarh. After going through intense mass interaction with student and youth in several towns, mohallas and villages in Delhi, UP, Bihar and Jharkhand, the Yatra culminated in a Chhatra Yuva Adhikar Mass Gathering in Kolkata on 21st November. Throughout the Yatra we interacted with several thousands of students and young people. The central slogan of the Yatra – Nafrat Nahi Adhikar Chahiye, Siksha aur Rozgar Chahiye (We Want Education not Hate, Jobs not Mobs) reverberated everywhere, striking a chord with all. 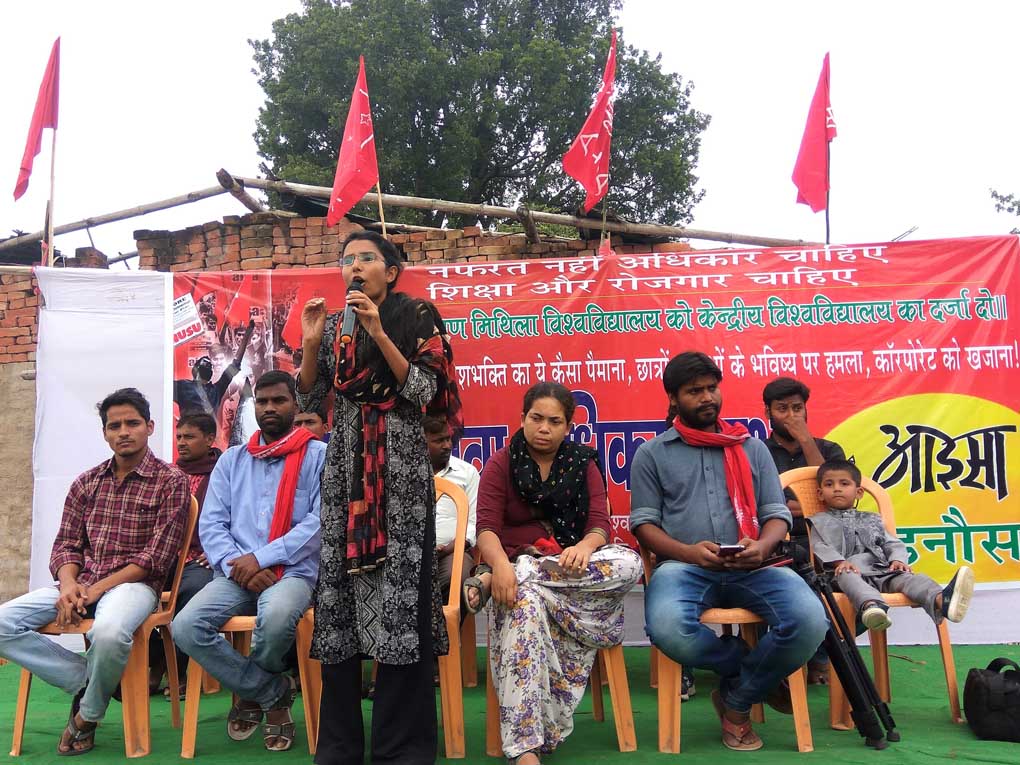 At an election rally in November 2013 the then aspiring Prime Minister Narendra Modi had declared that ‘if the BJP comes to power we will generate 1 crore new jobs every year.’ But the ground reality today is exactly the opposite. Today we have gone from a situation of job-less growth to job-loss ‘growth.’ Last year (2015-2016) job growth in the labour intensive sector has hit the lowest in the past 8 years. 84% reduction in employment generation has been recorded in this sector in 2015-16 as against 2009. In just one year jobs in formal sector were reduced by about 70 lakhs (CMIE, Centre for Monitoring Indian Economy, 18 July 2017). As a result of the note ban, about 17 lakh people lost their jobs between January and April 2017 (CMIE). According to the All India Council for Technical Education 60% of the 8 lakh engineers who graduate from technical institutions in the country every year remain unemployed. 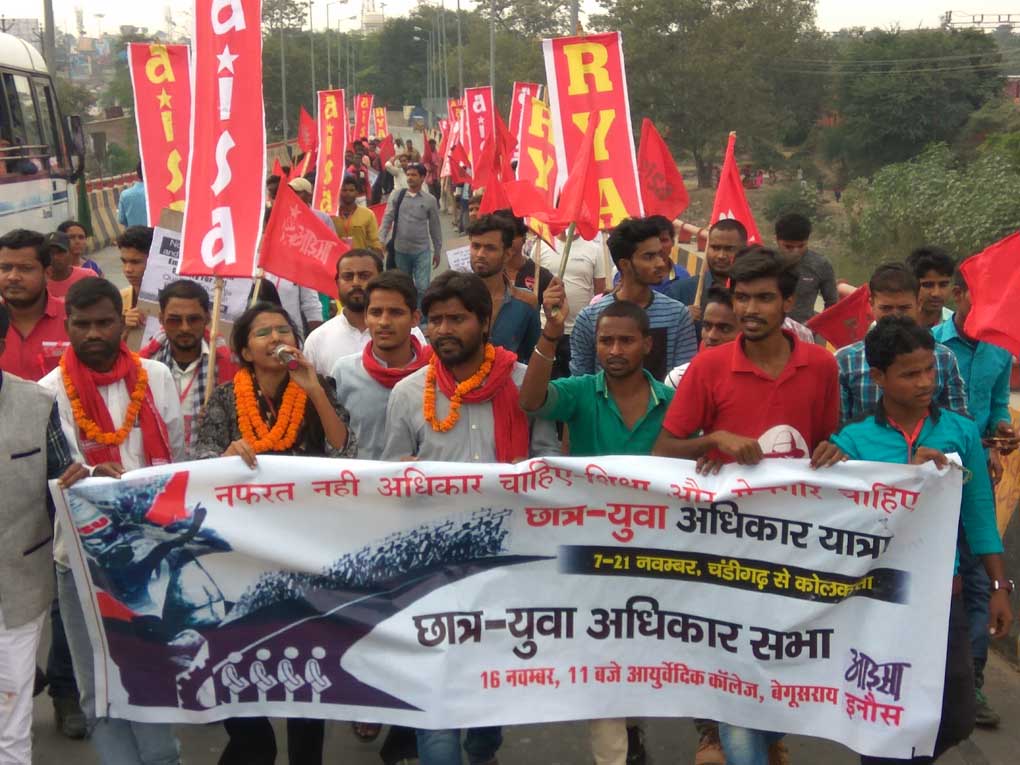 This government has failed dismally to fill the 1 lakh vacancies in alone in Group D in the Indian Railways. The number of 24604 clerks appointed in 2015 through IBPS in various banks has fell to 7,883 in 2017. The number of Bank PO appointments in 2015 was 12,434 and it fell to 3,562 respectively (from the IBPS website). Workers have been laid off on a large scale in major IT sector companies. According to the executive search firm ‘Head Hunters India’, the yearly job cut rate in the IT sector for the next 3 years will be between 1.75 lakhs to 2 lakhs.

Only 0.57% (3 out of 500 people) registered in Employment Regulation offices have got employment through this institution (The Indian Express, 26 July 2017). Of the 4.5 lakh youth registered in 2014-15 under the much-touted ‘Skill India’ scheme, only 0.19% succeeded in getting employment in various sectors. 800 Start-Ups are running between January and September 2017. Last year the number was 6,000 during the same time period. The rest have all shut down. 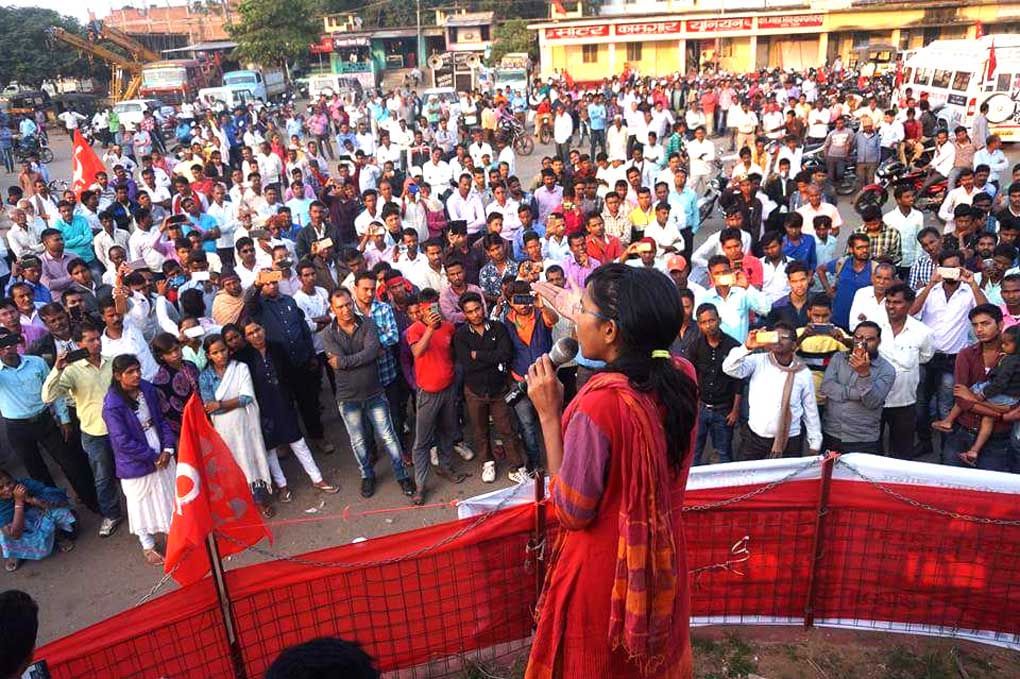 On the other hand, the Modi government started attacking opportunities of higher education and educational institutions since it came to power. The Central Budget expenditure on education has been reduced from 4.57% in 2013-14 to 3.65% in 2016-17 and the tax waiver given to corporate houses in 2016-17 has reached all time high of Rs 83,492 crores.

Massive fund cuts in education have come along with spate of fee-hikes in universities across the country. Through a notification dated 2 June 2017, UGC has asked topmost universities to run self-financing courses. This simply means the government is evading its responsibility of providing quality higher education and students will have to bear the entire cost. Those who can’t pay, will not get admission in best universities of the country. 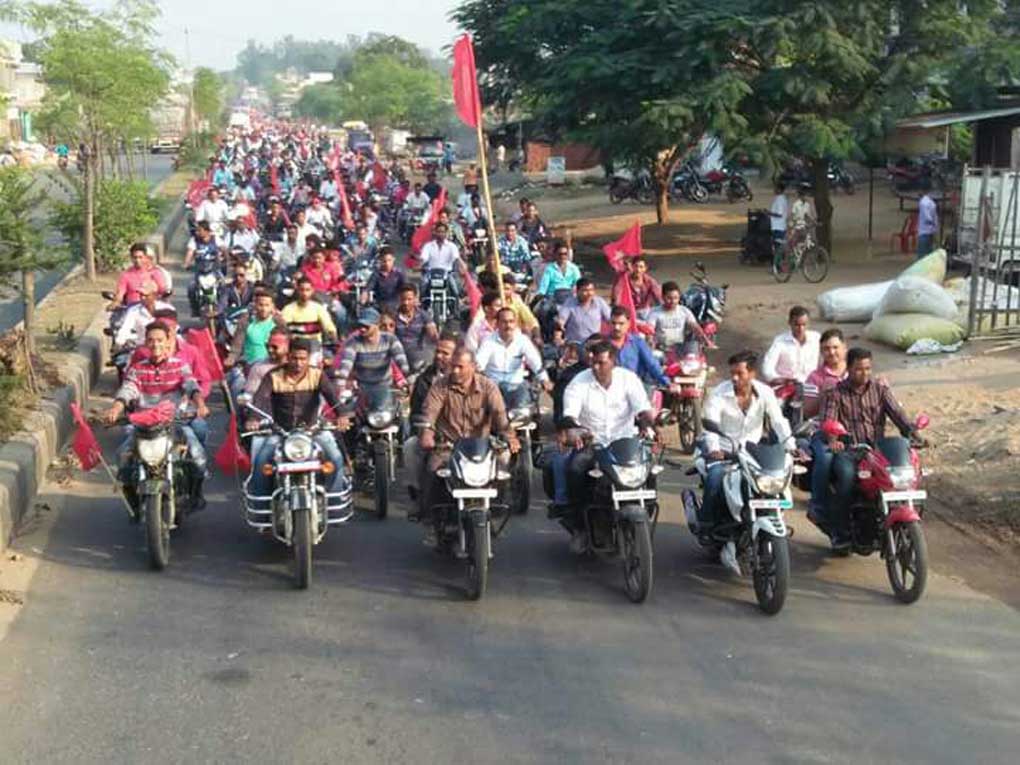 In order to push students out of higher education and research, the UGC Notification 2016 is being used to impose massive seat cuts in Mphil/PhD in universities. The Government is also cutting back on scholarships. There is a heavy shortage of teachers in Colleges and Universities across the country: 50-70% posts of the total number of posts required in most institutions are lying vacant.

At the same time, the BJP government is proceeding on a well-planned agenda of saffronization of education in order to destroy educational institutions, starve students of rationality and replace it with a steady diet of superstition and hate-mongering. Loyalty to BJP and RSS as against contribution/qualification in the field has become the sole criterion for appointments in key positions in educational institutions. Syllabi are being changed and institutions are being run based on regressive worldview of the BJP and Sangh Parivar. The empty slogan of Beti Bachao, Beti Padhao are being exposed by the woman students from BHU, JNU and DU who are fighting a battle for autonomous anti-sexual harassment bodies in campuses. 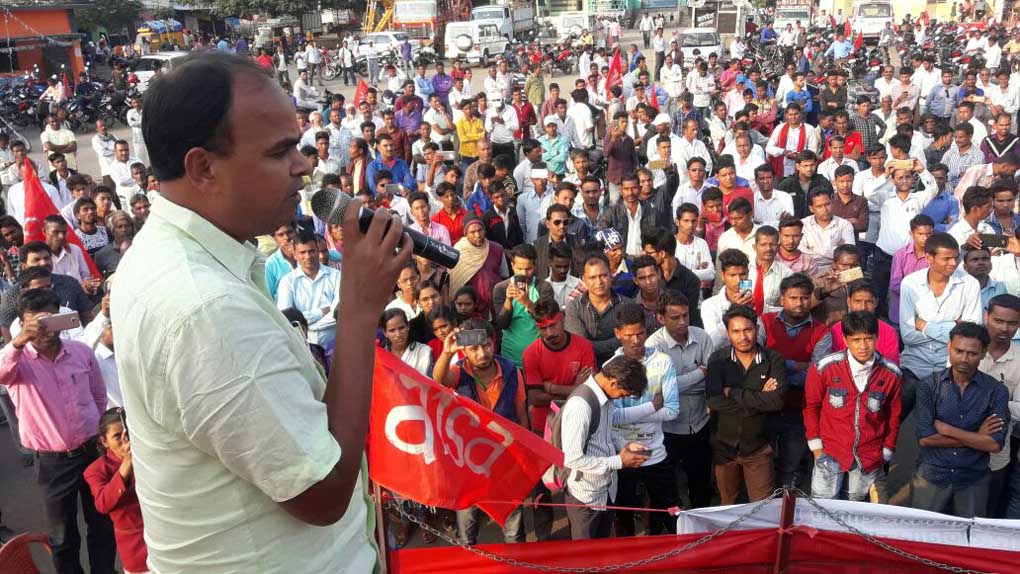 To evade questions on the government’s role in destroying educational and employment opportunities communal polarisation and hatred is being manufactured in the society. After snatching away education and employment, the conspiracy is to divert the youth of the country with ‘Gau-Raksha’, ‘Ram Mandir’, ‘Hindu Rashtra’, ‘Love Jihad’, ‘Demolish Taj Mahal’ and other similar campaigns.

In this backdrop, AISA-RYA’s yatra took up the task of exposing the game plan of communal divide and unite the student Youth of the country for demanding dignified employment for all and quality and accessible education for all.

The Yatra started from Panjab University in Chandigarh. In April year students of Panjab University braved a huge crackdown and charges like sedition to successfully push back a massive 1100 percent fee hike. The ABVP in collaboration with the University security tried to disrupt the Yatra program in the PU campus. But the public meeting was successfully conducted and the Yatra was flagged off by Professor Jagmohan Singh, nephew of Bhagat Singh. 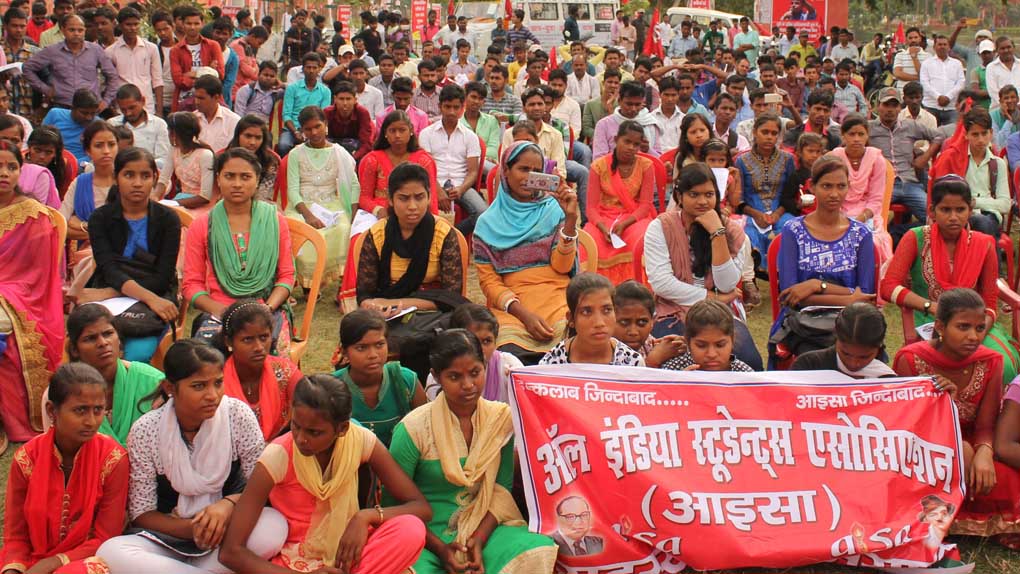 The Yatra reached Delhi on 8th of November – the one year anniversary of declaration of the disastrous demonetisation by Narendra Modi. A protest public meeting was held in Parliament Street as part of our Yatra, addressed by Paranjoy Guha Thakurta, Rahul Roy, Prof Atul Sood, CPI(ML) GS Comrade Dipankar Bhattacharya, and JNUSU President Geeta Kumari. JNU students who are waging a courageous struggle against the all-out attack on their campus by the Sanghi administration and against ABVP violence which resulted in the disappearance of a student Najeeb; DU students who fought a brave battle against ABVP led violence in Ramjas College; and students of Jamia Millia Islamia who fought a successful battle against fee hike and are demanding a full-fledged Students Union in the university participated in the protest public meeting in Parliament Street. 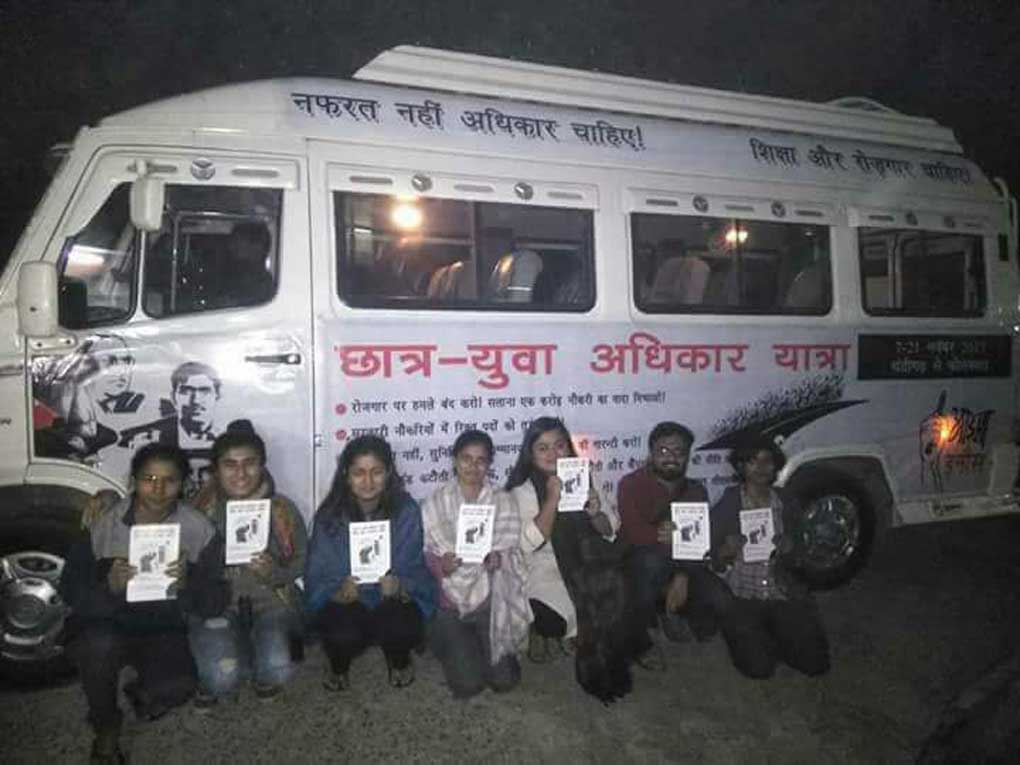 The Yatra entered Uttar Pradesh on 9th November. Public gatherings were held in several places in Mathura, Unnao, Lucknow, Rae Barely, Allahabad and Banaras. From nukkad meetings, public meetings inside university premises and students residential areas, the Yatra received an enthusiastic response from the youth of UP. Just like Panjab University, students of AU fought back attempts of fee hike in the university. BHU students are demanding end to sexual harassment and gender discrimination. As a response to their demand of setting up autonomous GSCASH like body and guarantee free moStudents of Lucknow university had faced arrest and crackdown for demanding justice for Saharanpur Dalits when Yogi Adityanath visited Lucknow University. Subversion of academic spaces to fulfill the vicious saffron agenda is going on in full swing in Yogi raj in UP. A Savarkar Research Centre is being set up in LU while students’ demands for hostel infrastructure and students union are being ignored. From Lucknow University, BHU to Allahabad University students faced arrest and charges for demanding justice for Saharanpur dalits against crackdown on the Bhim Army leader Chandrashekhar Azad Raavan. 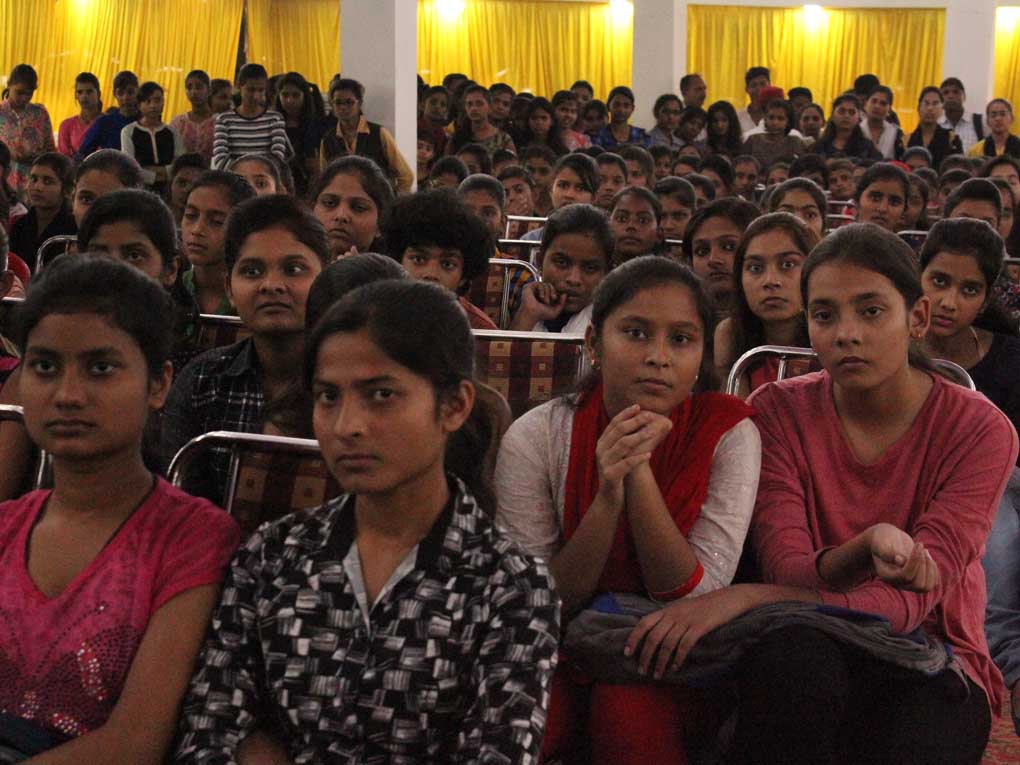 On 12th November the Yatra entered Bihar. The Yatra was received with enthusiastic slogans against hate mongering and assault on education and employment by the present things regime at Buxar. In Bihar, numerous public gatherings were held in several places. In Ara, a huge gathering assembled in Jain College of Veer Kunwar Singh University. Admissions for the 2017-18 session, that should have been over by July-August are still going on in these colleges in November! In several Ambedkar Kalyan Chhatravas hostels where dalit students stay, the Yatra was received warmly. 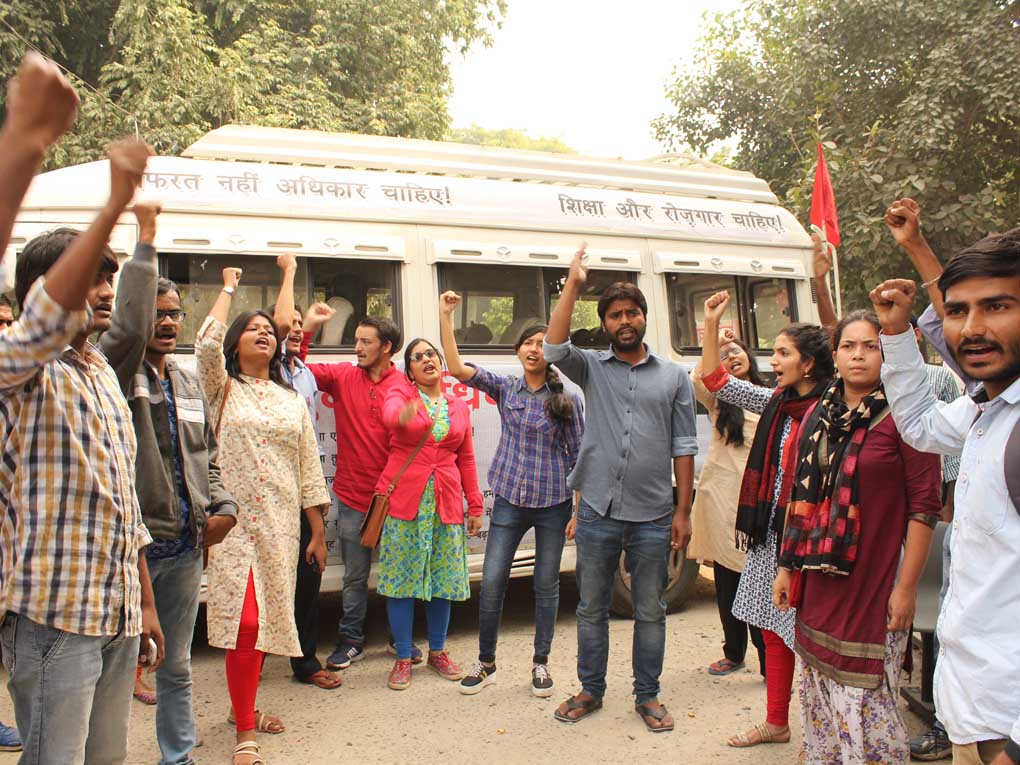 The Yatra subsequently addressed several public gatherings in Chhapra, Siwan, Gopalganj, Muzaffarpur, Darbhanga, Samastipur, Begusarai, Patna, Dulhinbazar, Paliganj, Vikram, Arwal and Aurangabad. Throughout Bihar, under the rule of ‘sushasan babu’ Nitish Kumar schools and colleges are starved of teachers. The academic sessions are running late almost in all universities. The school education system has crushed badly in Bihar. Lack of basic infrastructure and corruption rackets run by the education mafia (whose leaders are close to Bihar’s ruling parties) are what define the state of Bihar’s education. The spirit of the popular Sadak Par School (Schools On the Street) movement led by AISA-RYA reflected in the participation in the mass gathering throughout our Yatra in Bihar. 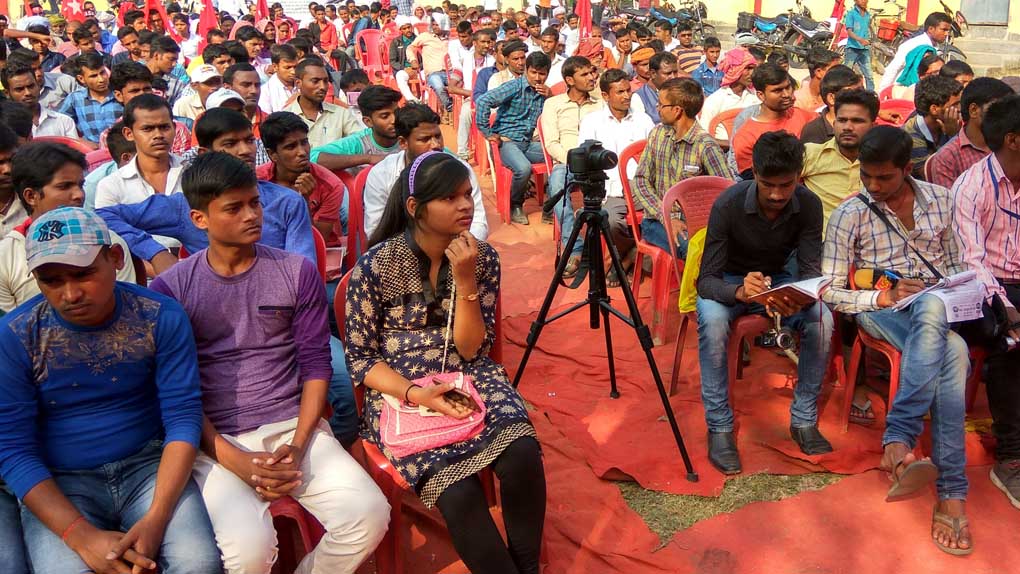 On 18th November the Yatra entered Jharkhand. Several public meetings were held in Amba, Daltanganj, Garhwa, Ranchi, Ramgarh, Hazaribag, Rajdhanwar, Saria, Bagodar and Dhanbad. Saffronisation of educational institute and curriculum is in full swing under the BJP government. The name of Ranchi University is being changed to Shyamaprasad Mukherjee University after the Jana Sangh leader! If in Bihar, post-intermediate scholarships for SC/ST/OBC and minorities has been reduced, in Jharkhand it has been stopped altogether. Privatisation of colleges is in a full swing when government institutions are being systematically starved of basic needs. 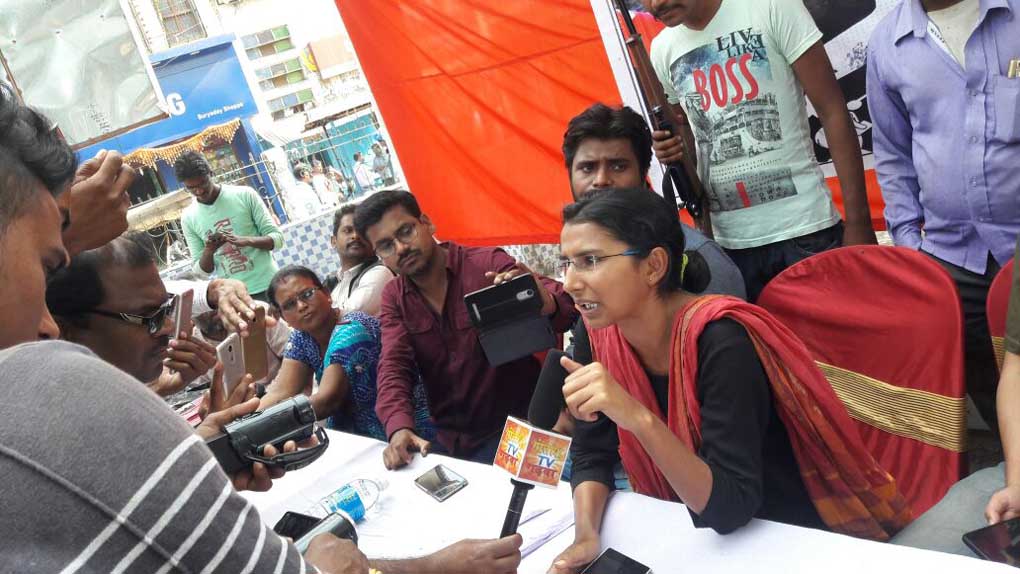 On 21st November, the Yatra entered West Bengal. A Chhatra Yuva Adhikar Samavesh was held in Bow Bazar. TMCP activists physically assaulted AISA activists in front of Surendranath College while they were campaigning for the Samavesh. This tells a lot about the situation of campus democracy and education in West Bengal. The ruling party Trinamool Congress led by the Chief Minister Mamata Banerjee runs terror and hooliganism against any differing voice and struggles for right to education. The Student Unions have literally been captured through violence in almost all colleges. And to destroy the few Student Unions where elections are held democratically, the St. Xavier’s model is being forcibly imposed. Students of Jadavpur university have been fighting against this authoritarian move. In Bengal also, a huge corruption nexus mainly in admissions is run by the Trinamool cadres in all colleges. Colleges are starved of teachers, and teaching posts are being contractualised even when the existing number of teachers is far less than sufficient. Government schools are being systematically destroyed to make path for rampant privatisation in school education. Massive corruption is deeply entrenched in recruitment in different government vacancies. 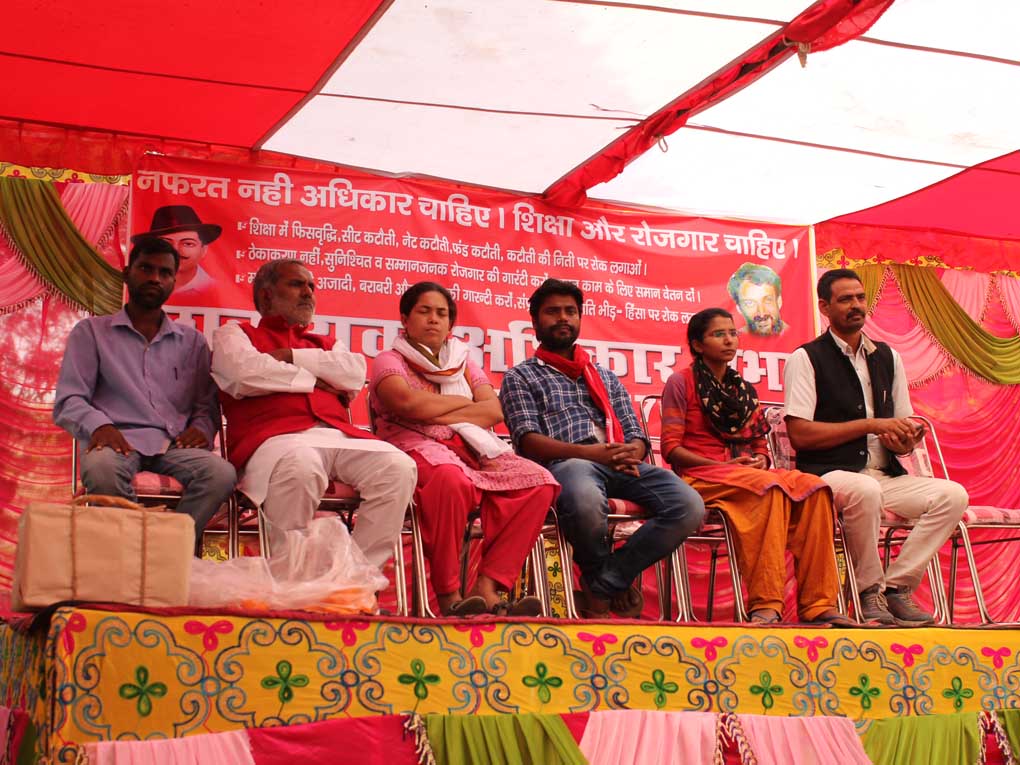 The aspirants for SSC in Bengal have been fighting a consistent struggle against massive corruption in recruitment and demanding fulfilment of 7000 vacant posts. When the Yatra visited Bengal, protests in several engineering colleges were happening demanding recruitment through campus interviews. In most engineering colleges students need to spend around Rs 50,000 per semester. The government rather than attempting to increase expansion in public sector in such a situation, has introduced huge irregularities in existing opportunities. The students of SRFTI are fighting against sexual harassment and sexist policing by the administration and demanding an autonomous GSCASH. The Adhikar Samavesh of AISA-RYA raised these issues. 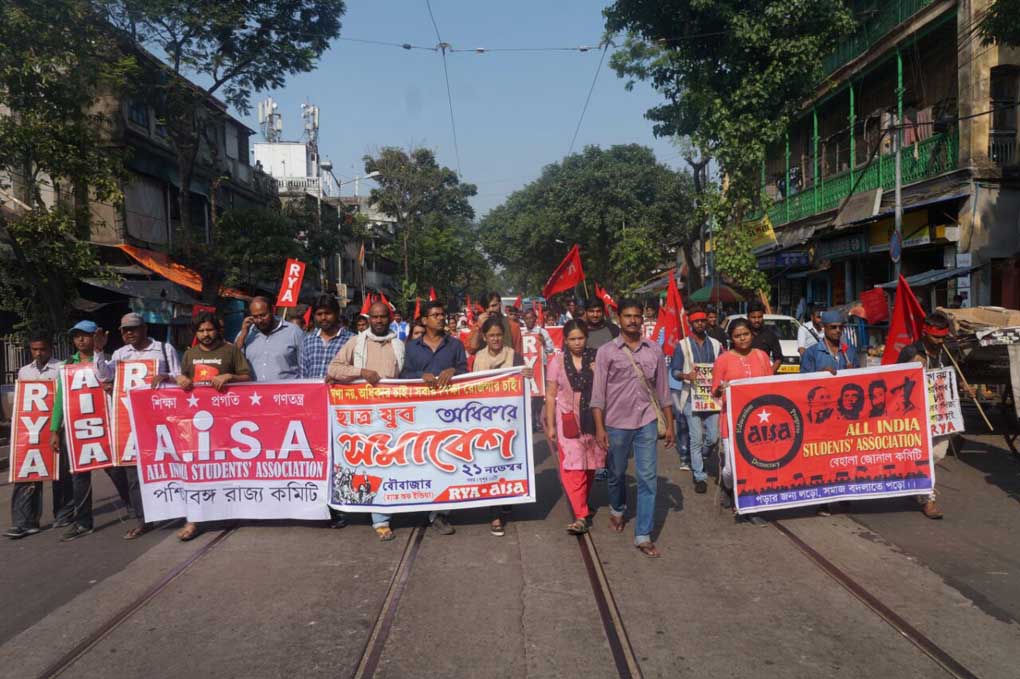 At a function on 6 October 2017, Rail Minister Piyush Goyal said, “It is a good sign if jobs are decreasing in the top 200 companies in the country, because today the youth of our country are becoming job-providers instead of job-seekers. Today everyone wants to be an industrialist.” A Cabinet Minister celebrating joblessness with such absurd logic is a cruel joke on India’s young people, especially when sons of BJP leaders and influential people in the Modi regime are amassing wealth through crony capitalism and corruption.

Throughout our Yatra, students and youth resolved to reject divisive hate-mongering and saffronisation, and unite to demand good education and decent employment for all.  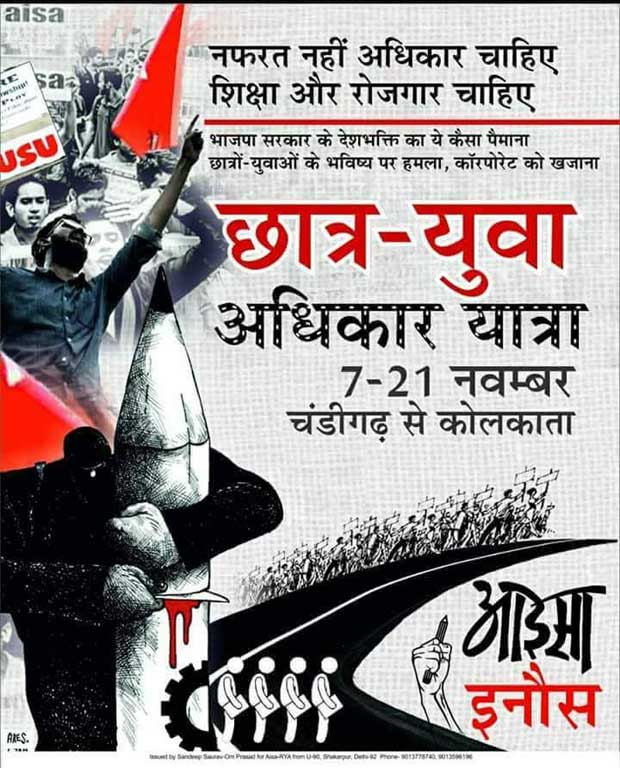