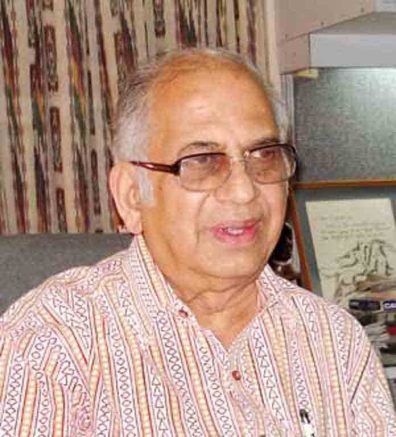 On the 1st of August, well known molecular biologist Dr. Pushpa M Bhargava passed away. He was 89 years old and had not been keeping well of late. PMB as he was known to his colleagues and friends was probably along with Yash Pal, who also passed away recently, the last among a generation of scientists whose social and political consciousness was whetted by our Freedom movement. PMB initially trained as a chemist doing his PhD from Lucknow University before Independence. From there he moved to Hyderabad to work at the Regional Research Laboratory. The move to Hyderabad from Lucknow and Allahabad (the place of his early childhood) was triggered by the invitation of S. Hussain Zaheer, brother of Sajjad Zaheer, one of the founders of the Progressive Writers Association, who was already in Hyderabad.

I consider it a privilege that, as part of my PhD research on the scientific workers movement, I could interview him twice in January and March this year. Despite his failing health he was really generous in agreeing to talk to me for long periods of time. As he told me during his discussions with me, his move to Hyderabad brought him in touch more leftist scientist and even members of the Communist Party among scientists. In Hyderabad he came in touch and even for a period of them stayed together with two other scientists with very clear sympathies for the left namely A Rahman and Baldev Singh. Both these figures eventually became important figures within the science policy circles in India. Towards the end of the 1950s PMB decided to study molecular biology, a field which was fast taking the place of physics as the frontier of science research. He eventually went on to establish the Centre for Cellular and Molecular Biology in Hyderabad, which till date remains one India’s best known institutes of science research.

Once India was free of British rule PMB’s generation was fully committed to the Nehruvian Project. I remember him telling me that his generation of socially committed scientists wanted everyone to be like them, this was one of the reasons why many scientists of his generation were active members of the Association of Scientific Workers of India. PMB himself was one of the founding members of the Association and remained active in it till the 1950s. In fact his roommates in Hyderabad, Baldev Singh and A Rahman were all active participants in the scientific workers movement in India. As he revealed to me his initial association with them was to leave a very strong impression on him for the rest of his life.
Dr Bhargava wrote on ranging from GM Seeds to Science education. Many social movements saw him as their friend. He himself was a strong campaigner against GM seeds and Nuclear Power. His library bore witness to his interests in multiple issues: they contained the top journals related to science research and alongside them newspapers and magazines of communist parties and various social movements.

For PMB science was never an end in itself: it was a means for him to reach out and understand various issues. But one of the results of this approach was that he put science on a pedestal where it could lead to dangerous consequences. At many times during our conversations I was very uncomfortable with his uncritical faith in the power and value-neutrality of science. I realized later that this was in large part because he belonged to a generation which believed saw science as a powerful vehicle of societal change.

PMB drafted not one but two statements on the need for scientific temper in our society. The latter of these statements went to create a major debate as to what scientific temper means. In 1997 he filed a petition in the Supreme Court asking that astrology not be taught in universities.

Remembering him in the pages of Liberation, it is important to remember that in times of bigotry and hate that the RSS and its affiliates are foisting in the country today PMB was one of those who returned his Padma Bhushan in 2015 to protest against the climate of intolerance that plagues our country today. Even the sphere of science is not immune from this. Research on things like the cow is being funded to promote and legitimize the polarization that is happening in the name of the cow, not to achieve any breakthrough in scientific knowledge. Imaginary creations like the ‘Pushpak Viman’ are being peddled as science within institutions like the Indian Science Congress. But unfortunately most of the scientific community is not speaking out even in matters where norms of practice and research within the world of science are being thrown to the winds.

At a time when scientists have shut their mouths and pretended to remain aloof from the world and society even when science is being replaced by mythology and superstitions Dr. Bhargava will remain a constant reminder through his actions like returning his Padma Bhushan, that science is meaningless without a social consciousness. It is only fitting that within a week of his passing away scientist across the country held a ‘March for Science’. Held in many places across the country, the March saw scientist, non-scientists, teachers and students coming out on the streets to demand more funding for science and education as well as for spreading of ideas which instill the spirit of critical enquiry within society. Let us hope that this will be beginning of the politicization of a new generation of scientists to which the baton can be passed on. 