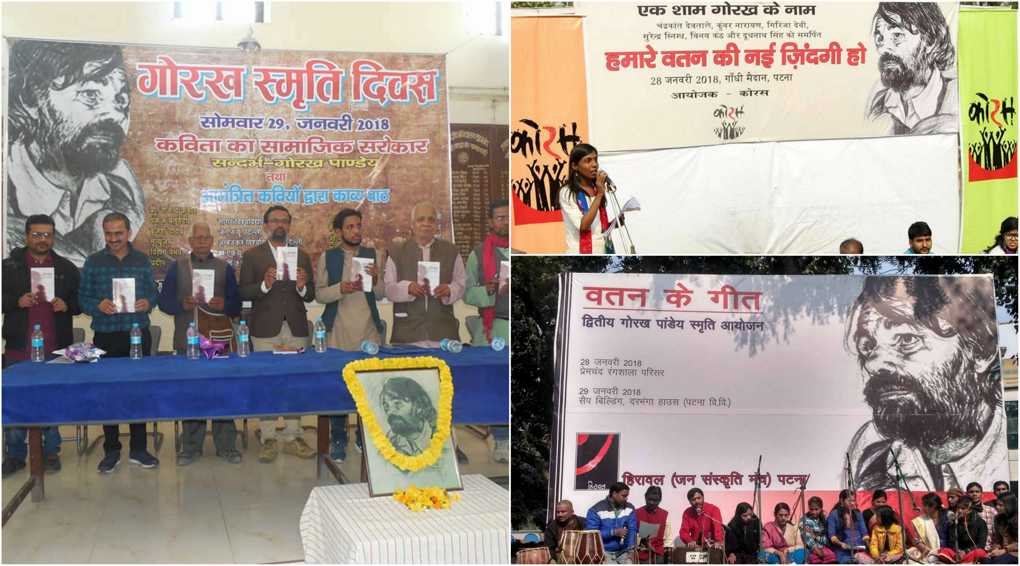 Several programmes remembering People’s poet Gorakh Pandey on his birth anniversary were organized on 28 January. Chorus organized a programme ‘An evening in the name of Gorakh’ in Patna’s Gandhi Maidan. The programme was dedicated to veteran poet Chandrakant Devtaale, Kunwar Narayan, singer Girija Devi, writer Surendra Snigdha, Doodhnath Singh and Professor Vinay Kanth. The event began with rendition of Gorakh’s ‘Hamaare watan ki Nai Zindagi ho’. Thereafter, the chief guest Alok Dhanwa shared his thoughts on Gorakh’s songs and poetry. He said that Gorakh was truly people’s poet and that his songs on the labour of workers and peasants are even sung today across villages and towns. A group of children presented a play on the occasion.

Another programme in the memory of Gorakh Pandey was organized by Hirawal in Premchand Rangshala premises. The programme was called- ‘Watan ke geet’ (songs of nation). Inaugurating the programme, the Hirawal team shared that Gorakh’s songs inspire us to work towards a better country, world and a society. His poems were written in defense of the rights of workers, peasants, and oppressed and deprived sections. Singing several songs penned by Gorakh, they also said that when fascism arrives, instead of addressing the basic problems of people, it emphasizes on celebrations and converts politics into a show! They said the programme – watan ke geet, was dedicated to the 99% people who form the toiling masses of the nation and on whose labour the prosperous 1% thrives. The people who deny the existence of the 99% and work for the profit of the 1% cannot be called nationalists by any yardstick. At times when rights are being attacked and people being oppressed, Gorakh’s writings teach us to not remain silent.

A programme was also organized on 29 January in Allahabad student union building. The first session of the programme was on ‘social concerns of poetry’ (kavita ke samaajik sarokar) and the second session was on poetry recitation. The programme began with Gorakh Pandey’s famous song- Samajwaad babua dheere dheere aaye’. The issue of magazine Parivesh dedicated to Gorakh was also inaugurated on the occasion. Gorakh’s friend and editor of Janmat, com. Ramji Rai, General Secretary of Jan Sanskriti Manch Com. Manoj Singh and others attended the programme.