Responding to a call by the Joint Platform of Central Trade Unions and all major industry/establishment wise federations at a National Convention held in New Delhi on August 8, 2017, thousands of workers turned Parliament Street at New Delhi into a sea of red flags for three days. This enthusiastic assertion of workers in the form of a 3-Day Mahapadav (Massive Sit–in) at the national capital from 9-11 November 2017 was against the anti-worker, anti-people, communal and divisive policies of the Modi Government. 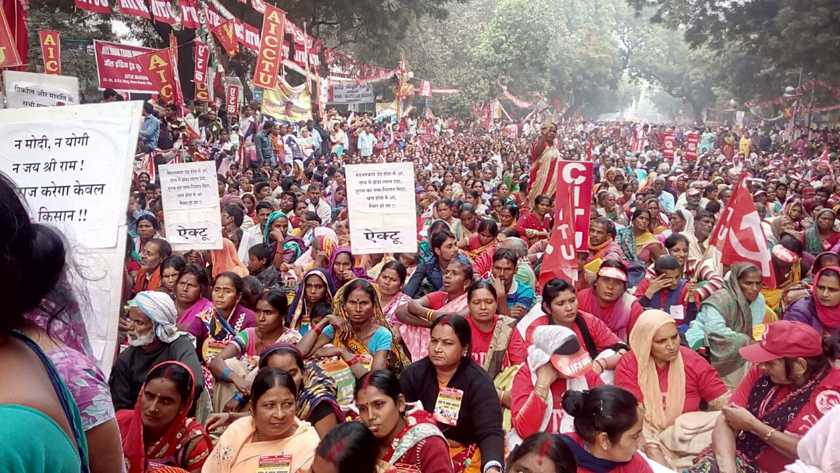 Thousands of workers participated in Mahapadav, from every corner of the country and every sector of economy – from the organized and public sector to the unorganized sector. Under the banner of AICCTU, there was an impressive and enthusiastic participation of workers particularly construction workers and women workers especially those in Government schemes (ASHA, mid-day meal etc). The workers had to endure long and difficult journeys – made worse by the smog in Delhi and nearby states – in order to each the Mahapadav.

2. Contain Unemployment, Decent Jobs for all

4. Universal social security for all

9. No ceiling on Bonus, ESI, PF, and increase gratuity

11. Compulsory registration of trade unions within 45 days, Ratification of ILO Conventions 87 and 98

12. No FDI in Railways, Defence and Insurance 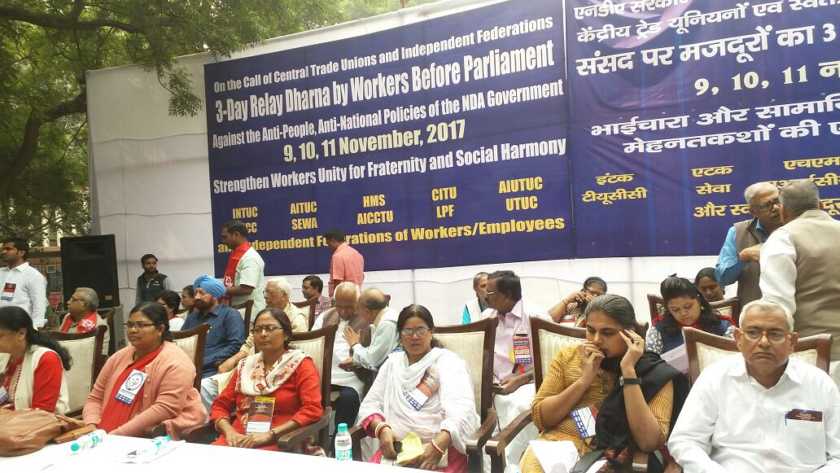 The Mahapadav resolved to intensify united struggles in the future – announcing plans for district-level joint conventions in the first week of January 2018, protest actions on the day of presentation of Union Budget, Scheme workers’ one day strike in the month of January; and militant programmes in various forms at district level throughout the country. The Mahapadav also warned of the possibility of an indefinite countrywide strike action if the Government ignored the Charter of Demands. The Mahapadav expressed its solidarity with ongoing movements of peasants and other sections of toiling masses.

Despite numerous nationwide joint strike actions, the most prominent being those of 2nd September 2015 and 2nd September 2016, which crores of workers joined against the policies of the Governments, the ruling regime at the centre has been ignoring the workers’ demands and increasing its onslaught on the rights and livelihood of the working people of the country.

To assert the issues of different sectors along with the overall attack on working class, the first day of Mahapadav was focussed on organized and public sector, second day on unorganized and the third day on women workers including Scheme workers. Each of the three days of the Mahapadav was divided in three sessions, with trade union leaders’ speeches interspersed with cultural performances by workers. On behalf of AICCTU, the leaders who spoke and sat in presidium are as follows – on first day i.e. 9thNovember, for the first, second and third session, respectively the speakers were Rajiv Dimri, General Secretary, AICCTU; Ravi Sen, General Secretary of All India Centre of Railway Workers and Working Committee Member of AICCTU; Mahendra Parida, National Secretary of AICCTU. The AICCTU leaders present in the Presidium in each session were: Santosh Roy, national secretary; Shyamlal Sahu, general secretary of Centre of Steel Workers, Bhilai Steel Plant and national councillor of AICCTU; and Shyam Lal Prasad, national vice-president of AICCTU. 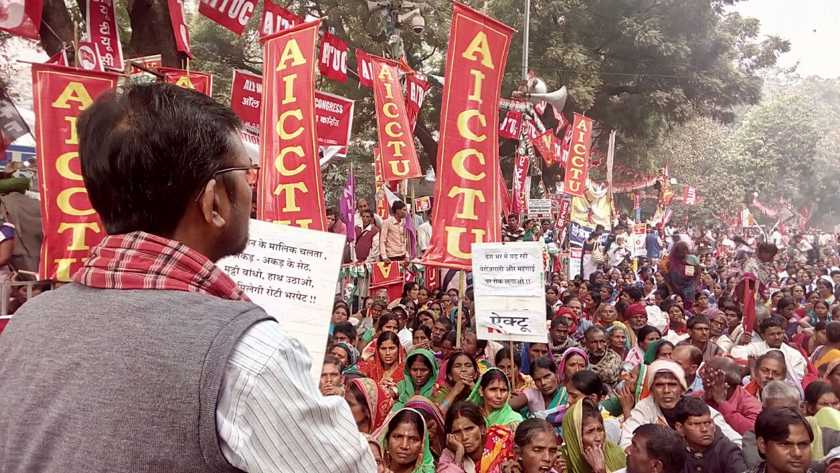 In support, the trade union organizations like NTUI, IFTU and Mazdoor Ekta Committee mobilized workers for Mahapadav. Several trade union organizations from abroad, particularly International Federations like WFTU and ITUC sent messages of solidarity for Mahapadav. On that day, three mid-day meal workers from East Champaran – Comrades Kumanti Devi, Shahida Khatoon and Sahana Khatoon – sang a song composed by them calling upon workers to organise against oppressive Governments (see BOX). At the end of the concluding session on the third day, Brijendra Yadav, a student of JNU and an activist of AISA recited a poem lampooning the Modi government and Sangh Parivar.
The Mahapadav was clearly a reflection of the growing anger of the working class and its determined resolve to intensify its resistance.