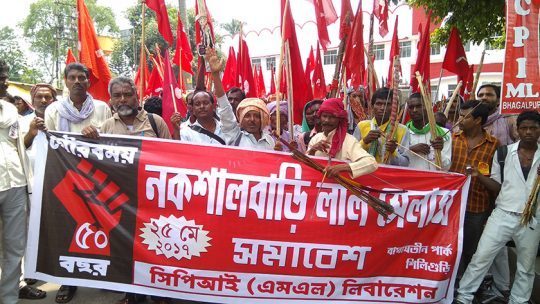 On the occasion of 50th Anniversary of the great peasants uprising in Naxalbari, Siliguri town turned into a red sea of activists waving flags and banners on 25 May 2017. Thousands of people paid tributes to the immortal martyrs of 1967 uprising and reiterated their resolve to carry forward the legacy of Naxalbari and to complete the unfinished revolutionary task of freeing the masses from exploitative land relations and power structures to make a freer, democratic and egalitarian society.

Before a huge rally at Bagha Jatin ground in Siliguri in the afternoon, CPI(ML) leaders and activists visited the historic sites of Naxalbari uprising.

The village of Jharujote was flooded with activists in the morning of 25th – the place where now stands a memorial plaque at the side of the main road reminding of the incident of 24 May 1967 which was a triggering point for the nationwide wave of revolutionary uprising that engulfed thousands of youth and students, peasants and workers in all corners of the country, and set a revolutionary course in the communist movement in India. Fifty years ago in this village brutal feudal and police repression was met with militant resistance of peasants and adivasis whose collective might had forced oppressive landlords to retreat on 24 May 1967.

The plaque reminds of that historic day. CPI(ML) central committee members along with hundreds of activists paid floral tributes to the martyrs. The son of Naxalbari martyr Babulal Vishwakarmakar accompanied them to the memorial.

A few kilometres away next to Jharujote is Bengaijote where police went berserk the next day on 25 May 1967. The sorry plight of peasants in those days is described recently by one of the participants of this movement comrade Shanti Munda as “I have seen the tears of sharecroppers who had to give away whatever they produced and even their agricultural implements to the landlords to pay the rent.”

The armed police present at the spot were encircled and made to surrender before thousands of people, the latter ensured their safety and letting them go unharmed from the spot, unaware that their peaceful gesture will be met with a brutal attack very soon. Same police force came back and began indiscriminate firing on the crowd gathered. Eleven people including eight unarmed women, a 15-year-old boy and two small children were shot dead by police. Poor peasants fighting for their rightful due met with such state brutality and hatred that the bodies of those killed were not handed over to their family members.

Addressing at the memorial CPI(ML) central committee member comrade Abhijit Mazumdar told about the incidents of early days of Naxalbari struggle, about its martyrs and leaders in detail. Comrade Dipankar reiterated the importance of Naxalbari in combating the fascist forces and said that the it had brought out a revolutionary change worldwide in spite of the fact that state used all its might to repress the movement. This was such a powerful movement that continued with its own internal strength despite brutal police repression and large number of martyrdoms of comrades in the very initial phase. The message of the Naxalbari reached much far and even beyond the reach of existing ranks and file of the party resulting in widespread awakening among students, youth and various sections of the people. The same spirit is reverberating in whole country being manifested in the struggles of students, youth, workers and peasants and this is how the students are reaching out and joining the various democratic struggles in the society – be it of workers of Maruti, or the dalits of Una and Saharanpur. Naxalbari had taught us to see history from the peoples’ perspective and had brought forward the names of innumerable martyrs who were forgotten by the ruling classes right from the first war of independence of 1857. Today again the ruling party is trying to distort the glorious history of people’s struggles which is rightly being resisted by the people. We need today same energy and spirit of Naxalbari to fight with the regime which is trying to snatch away peoples’ hard won rights and distort social amity and peace. The Naxalbari wasn’t a spontaneous movement but was built as a continuation of Tebhaga and Telangana struggles.

This movement also consolidated the demarcation line between two streams of left, between those who firmly stood and fought to advance the class struggle and those who, when in the UF govt. in West Bengal, took sides with the state and tried to suppress the uprising with all types of repression. After being for long years in power the CPM had to face the wrath of same peasantry in Singur and Nandigram which ultimately led to its ouster from power. And now again West Bengal is awash with the voices of agitating peasantry in Bhangor against land acquisition under TMC regime. The peasants are continuing with the militant resistance giving us a glimpse of Naxalbari even today. Naxalbari is alive in West Bengal and all over the country in the struggles of the people. Adivasis, peasants, tea garden workers and youth fought unitedly fifty years ago and today again same spirit is needed to defeat the looters of people’s resources to overcome the renewed and intense exploitation. Today we are stronger with wider spread and able to face the increased attacks and new dangers posed before the people. By facing today’s challenges will be our best tribute to the fighters and martyrs of Naxalbari.

Siliguri town was witness to an unprecedented gathering of people waving red flags with slogans expressing immortal spirit of the historic peasant revolt with slogans ‘Naxalbari Nahi Mara hai, Naxalbari Nahi Marega’ (Immortal spirit of Naxalbari lives on) and ‘Red salute to the Martyrs of Naxalbari’, ‘Long live martyrs and architects of Naxalbari’. People came from all parts of the country, more were from neighbouring Bihar, Bengal and Jharkhand. The Naxalbari50 march began from Siliguri railway station to Bagha Jatin park, attended by many veterans who fought during Naxalbari days as well as those who fought and faced state’s brutality during the repressive decade of seventies. Amidst waving red flags, adivasis, women, students, workers and people from all walks of life joined the march. A large number of tea garden workers, women and men, from Naxalbari were prominently visible. The March was led from front by comrades Dipankar Bhattacharya, Swadesh Bhattacharya, Kartik Pal, Abhijit Mazumdar, Partho Ghosh, Mahboob Alam, all members of CPI(ML) central committee and Saiful Haq and Banyashikha Jamali.

The rally, presided over by CPI(ML) Politburo member Swadesh Bhattacharya, was addressed by veteran of the Naxalbari movement comrade Nimai ghosh – he had been incarcerated in jail for ten long years for being the publisher of Liberation, and comrade Khemu Singh – who carried on the struggle in the region throughout the seventies braving heavy state repression, along with comrades Dipankar Bhattacharya, Abhijit Mazumdar, Kartik Pal, RWPB leader Saiful Haq and representative of Communist Party of Revolutionary Marxist, Darjeeling.

The rally began after paying tributes to the martyrs by observing a two minutes’ silence followed by the passing of the Resolution which was presented by CPI(ML) Politburo member Kavita Krishnan.

Comrade Dipankar, addressing the rally, again reiterated the importance of Naxalbari whose vibrant spirit is alive in the struggles of Indian people despite ruling classes efforts to tarnish its image by spreading lies and false rumours. He said that the movement has adopted newer forms of struggles with changing times and has successfully intervened in every sphere of political struggle. The Naxalbari had established the same people-first patriotism which was first defined by the freedom fighters of 1857 as expressed in the song of one of the leaders of this revolt, Azimullah Khan as ‘hum hain iske malik Hindustan hamara’ – We, the poor, the workers and the peasants, are the builders of this nation and this is our right to decided how to run our country. Naxalbari carried forward this message that actual tillers of the land should have the right to rule, in place of the landlords. Same struggle is being fought today by workers, peasants and other sections of people to defend their rights, lands and employment against the massive corporate plunder of resources, exploitation of labour and attacks on democratic rights. This fight goes against fake patriots who had earlier betrayed the independence struggle and today are dividing the society in the name of patriotism using all kinds of goondaism and violence on vulnerable sections of society. On the contrary our patriotism is the one which is defined by the martyrdoms of innumerable martyrs who fought and laid down their lives defending people’s rights. Comrade Charu Mazumdar’s last article correctly described this patriotism as ‘the people’s interest is the Party’s interest’. The people are the country and their interests are best thing to defend for the nation to flourish and prosper. Those in the helms of power today are dividing the country on religious, caste and ethnic lines just as the colonial British rulers did, while Naxalbari teaches us to fight unitedly against every kind of oppression and loot, said comrade Dipankar.

The Naxalbari veterans and guests in the rally were presented with the mementoes on the 50th anniversary. A book of compilation of the stories on Naxalbari martyrs was also release on this occasion.

The rally concluded amidst passionate sloganeering, followed by a cultural evening where revolutionary songs and plays were performed in memory of Naxalbari struggle by teams from many states.

Comrade Khokan Mazumdar passed away in the evening of 29 May 2017 at Siliguri, just when we observed the 50th anniversary of Naxalbari. Comrade Khokan Mazumdar gave his best to the revolutionary communist movement for all these fifty years and even before during the run-up to Naxalbari. He was one of the legendary architects of Naxalbari and till the end of his life he remained a committed leader of the CPI(ML) and true defender of the interests of the people. While saluting his inspiring legacy, we resolve to carry forward his unfinished mission and resist the fascist threat to the democratic rights and aspirations of the Indian people with all our might.