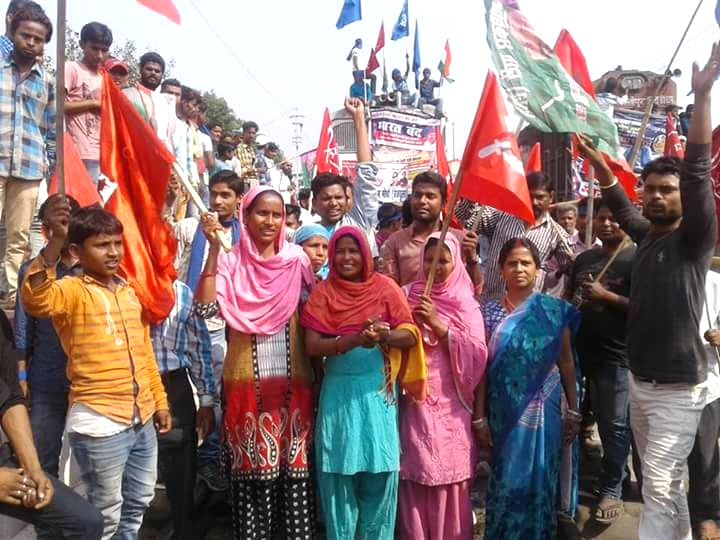 On 1 April, a day before the Bharat Bandh, a massive Mashaal Juloos in support of the bandh was taken out by Ekta Manch in Bagodar. CPI (ML) too joined the juloos. In Barwadih, hundreds of people joined a mashaal juloos (torchlight procession) against the dilution of the SC-ST act. The juloos got tremendous support from several groups and organisations.

In Barwadih block, CPI (ML), RJD and several other non-BJP organisations joined protests against the amendment to the SC-ST act. The Bandi-March bazaar and the rail line were also blocked. The entire bazaar remained closed. Nearly 200 protesters were arrested and kept in the camp jail of the block.

In Giridih, supporting the Bharat Bandh against the SC-ST Act dilution, a protest march was taken out from local Tower Chowk and the effigy of PM Modi was burnt following the march in a Nukkad Sabha.

In Dhanbad, the bandh was historic. The railway line in the Jainagar block was blocked by CPI (ML) activists for several hours. Several trains including Rajdhani remained affected due to the bandh. Protestors also raised slogans that the country will be run according to the Constitution and not fascism. In the district headquarters of Dhanbad, thousands of people participated in the Juloos that started in the morning and marched through various places, markets, etc. till almost 2 in the afternoon. Complete closing of all markets was ensured. The juloos was followed by road blockade in front of the district office. No transport was allowed to run. Hundred percent success of the bandh was ensured in Dhanbad.

A massive march in support of the Bharat Bandh was taken out by CPI (ML) in the state capital Ranchi.

In Patna, protesting against the attempts to weaken the SC-ST Atrocities Act, CPI (ML), MLAs Comrades Mehboob Alam, Satydev Ram and Sudama Prasad came out on the streets and joined the call of the Bharat Bandh by various Dalit organizations. They demanded withdrawal of the amendments that dilute the Act. A protest meeting was also organized at the Kargil Chowk.

The CPI (ML) MLAs said that CPI (ML) resolutely opposes any attempts to weaken the SC-ST Atrocities ACT. The increase in attacks on Dalits requires strengthening of measures to prevent these attacks and not weakening of the existing measures. They exposed the anti-Dalit face of the BJP government and demanded immediate revocation of the amendments. The working of the assembly was postponed on their demand. AISA and RYA activists also took out marches and blocked the roads in several parts of the city.

The transport services remained affected for several hours on NH31 in Begusarai. NH 57 in Muzaffarpur was also blocked at Ahiyapur Chowk. National Highways were blocked at several places across the district including Patna-Aurangabad Road, Jagdishpur in Bhojpur and others. On the day of the bandh, the CPI (ML) activists reached the Lehriyasarai station, Darbhanga in the morning and blocked the intercity Train from running.

In Khagariya, as CPI (ML) activists joined the nationwide call for Bharat Bandh and even after their leader Com. Arun Das was seriously injured following an attack by BJP workers and lost consciousness. He had to get 8 stitches. However,  this  did not deter the party activists from facing the casteist forces and standing against them. The bandh supporters gheraoed the DM and nearly 27 protestors were arrested.

In Bhojpur, an effective bandh was ensured. The trains were stopped for nearly 4 hours at the Ara railway station. The youth gathered raised energetically raised slogans against the dilution of the SC_ST act and hailing the revolutionary unity of the red ad the blue that was evident in the bandh. The success of bandh in Ara was jointly ensured by activists of CPI (ML), AISA, RYA and Bhagta Singh Yuva Brigade.

Trains were also stopped in Jehanabad, Madhubani and other places.  In several like- Siwan city; Betiya, Narkatiyaganj, Sikta and Baghaa in West Champaran; Phulwaari, Dhanrua, Fatuha, Bihta, Naubatpur in Patna district; and in several places in Samastipur and Madehpura, massive protest marches were taken out besides ensuring road blockades.

As Dalit and left organizations tried to ensure successful bandh, murderous assaults on Dalit and CPI (ML) activists were also attempted in Khagariya, Darbhanga, Ara, Muzaffarpur and other places. While Comrade Arun was attacked in Khagariya, ABVP lumpens also unleashed attacks on Dalit and ML activists in Darbhanga. A CPI (ML) supporter Manoj was seriously injured in Jogiyara station in Darbhanga. In Vaishali, while a bandh supporters were addressing the protestors at Rajendra Chowk, the lumpens of Bajrang Dal, Hindu Putra and such organizations attacked the bandh supporters in presence of the state Police. It is notable that the police under Nitish Kumar’s rule was seen as supporting the attackers of the bandh supporters.

Bihar CPI(ML) state secretary Com. Kunal called the 2 April Bandh historic. He said that bandh remained was effectively ensured in several parts of Bihar. CPI (ML) joined the call of the bandh in protest against the dilution of the SC-ST Atrocities Act and the increasing attacks on the Dalits, minorities and the other marginalized sections. The anti-Dalit face of the BJP and RSS has been completely exposed. At a time when atrocities against the Dalits are increasing, instead of coming down heavily on the perpetrators of the atrocities, the regime is instead trying to weaken the laws themselves. The success of the bandh is a reflection of the people’s anger which was evident during the bandh.

A rally and road blockade was held in Yeleswaram mandal in the East Godavari district of Andhra Pradesh in support of the Bharat Bandh. Several CPI (ML) activists participated under the leadership of Com. Ganeshwara Rao, Com. Arjun Rao and other leaders.

CPI (ML) activists also joined in ensuring the bandh in several parts across the country.

CPI (ML) activists also joined in support of the Bharat Bandh in several places across Uttar Pradesh including Lucknow, Allahabad, Banaras and Gorakhpur. Massive protest demonstrations were organised in several of these places.

The CPI (ML) unit of Lucknow started its march from Lalkuan office and passing through Hussaingunj Chauraha and Vidhan Sabha, they reached Ambedkar Statute. There, they expressed unity and solidarity with the Dalit organisations present there and joined them in raising slogans against dilution of the Act.

In Gorakhpur also the march begin from the party office and it passed through Golghar, Collectorate Chauraha, Town Hall and other locations to ensure a successful bandh.

In Banaras, a public meeting was organised under the initiative of CPI (ML) and joined by several progressive people’s organisations. They also held a protest march. Representatives from CPI(ML), Insaf Manch, Jan Adhikar Manch, Mahila Jagriti Samiti and other organisations also spoke in support of the Bandh.