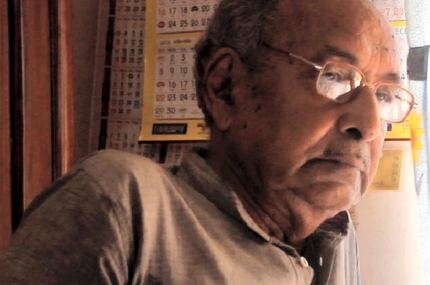 In the midst of the dark times our country is facing now, we just lost Nemai Ghosh, the octogenarian young man with the evergreen spirit of revolutionary zeal.

Comrade Nemai Ghosh was born on August 30, 1935 at Bagnan of Howrah District under the undivided Bengal. His father was Sudhangshu Bhusan Ghosh and his mother, Karunamoyee. During the fifties he joined the students and youth movement of the time and soon came in contact with the Communist Party of India. After his Matriculation examination he got admitted to college but he discontinued his higher studies to dedicate his life to the communist movement.

On May 25, 1967 the Naxalbari peasant uprising began with the massacre of eleven peasant women and children at Bengaijyot. Comrade Nemai and his close associates at Deshhitaishi supported the peasants uprising. Their stance was at odds with that of the the CPIM leadership, and on June 28, CPIM hooligans, directed by CPIM leader Sudhangshu Dasgupta, attacked the Deshhitaishi team and occupied the office. Comrade Nemai Ghosh and others were ousted from the party. On that very day he and other senior leaders decided to start publishing Deshabrati within a week. And the first issue of Deshabrati came out on July 6, 1967, with Comrade Gopaldas Mazumder as Editor.

Comrade Nemai Ghosh’s new shelter was now the Deshabrati office. In 1969 the CPI (ML) emerged from the Naxalbari movement as the new communist party on the political map of India with Comrade Charu Majumdar at its helm. Comrade Nemai Ghosh was very close to Comrades Charu Mazumdar, Saroj Dutta, Kanu Sanyal, Sushital Roychowdhury and other leaders of the newborn party.

The CPI(ML) then faced a intense state terror, with revolutionary peasants, students, intellectuals and leaders being killed, often in public, by the police and private armies of the party-in-power. This daily staging of terror in the name of denaxalization of rebel society should strike a chord of remembrance today, as dissenting voices challenging the Government are branded “urban Naxals” as a pretext to arresting or silencing them. At that time, almost all the contemporary political parties, with few exceptions, stood with the state terror.

Comrade Nemai Ghosh had an important role at the Deshabrati office-desk and also as a reporter, while also being the publisher of both Deshabrati and the English party organ Liberation which was first published on November 11, 1967.
He married Kajal Basu Thakur on December 9, 1969. Just four and half a months after his marriage, he was arrested on April 27, 1970 from the office of the Deshabrati just before he set out for home to meet his ailing father. His daughter was born when he was in prison, and she only met him when he was released in late 1979.

After his arrest he was taken to Lord Sinha Road and had to face a cruel interrogation all through the night. During the days of his prison in the Presidency Jail, he began writing his first novel Sangsaptak. Samir Roy, another political prisoner and a renowned poet, encouraged him to get the novel complete. Comrade Nemai wrote many plays and poems in prison, and organised a prisoners’ protest against the jail atrocities. He suffered severe torture in jail, which cost his health dearly in later life.
When he returned home after spending nine years in different prisons of India he began to rewrite his novel Sangsaptak (the original manuscript got lost from the custody of the poet Samir Roy). The novel was published on August 5, 1996. Comrade Nemai enjoyed writing plays, and playing roles in telefilms and jatras. He published three books of short stories (Bhabataraaner Galpo O Onyanyo Galpo, Manush and Anya Kantha), one booklet of poems (Janaganer Bhalobasar Raktagolap) and a collection of poems (translated in Hindi and English) written in jails entitled Jail Kavitayen.

The effect of police tortures in jails almost crippled him, and in the 1980s he had to get admitted into hospital to undergo an operation and was confined to his home between 1990-1993. In 1994 he again engaged himself with various agitations and started a publication named Srijani. He became attached to many a committee for organising peoples struggles and was a living legend of the Naxalite movement to the younger generation whom he loved most. Budding poets, painters, editors of periodicals and political organizers of the revolutionary left knew and loved him as Nemai Da. In the latter part of his life he became the president of the Paschimbanga Ganasanskriti Parishad in the year 2017 at the Budge Budge state conference. On May 25 2017 he and Kajal visited Naxalbari to attend the rally commemorating fifty years of Naxalbari. On July 4 2018, he breathed his last at 11.30 a.m. in the SSKM Hospital. He is survived by his wife and his daughter and her family.

He was remarkably free from all sectarianism and worked hard to create a unified forum for peoples’ struggles, and was known and respected as a friend of all groups of the revolutionary left.