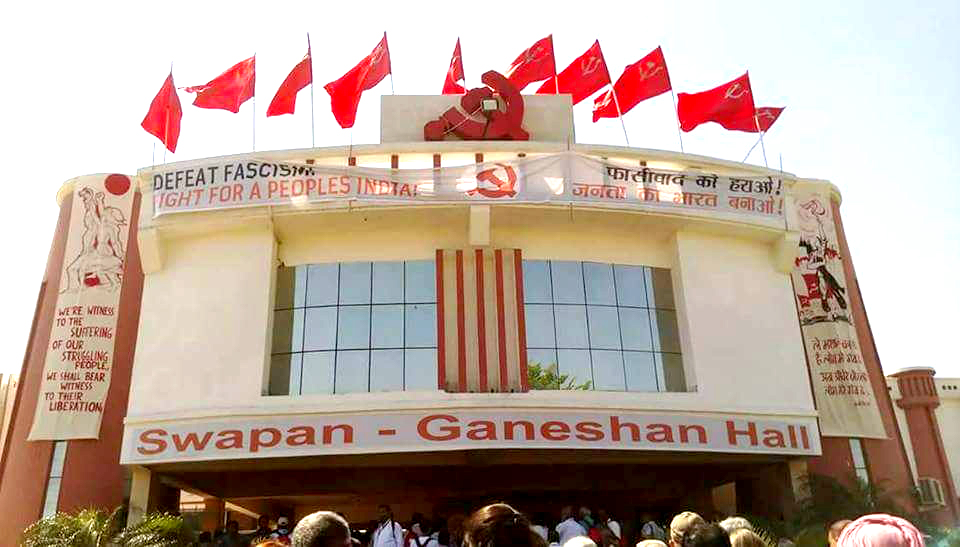 The 10th Party Congress of the CPI(ML) Liberation concluded on 28 March 2018 with the election of a 77-member Central Committee. Comrade Dipankar Bhattacharya was re-elected General Secretary of the party.

The 10th Party Congress of the CPI(ML) Liberation was held at Mansa, Punjab. It began with an Inquilab Rally on 23 March, the martyrdom anniversary of Bhagat Singh, Sukhdev and Rajguru, and a statue of the three martyrs was dedicated to the people by Comrade Dipankar, CPI(ML) GS, at the Baba Jeevan Singh Shaheedi Park. The Mansa MLA Nazar Singh Manshahia was also present and spoke on that occasion of the inauguration of the statue.

The Inquilab Rally was addressed by Bhagat Singh’s nephew Prof Jagmohan, Comrade Rajaram Singh of the All India Kisan Mahasabha, Rameshwar Prasad of the All India Agricultural and Rural Workers’ Association, Sucheta De of AISA, Kavita Krishnan of AIPWA, and others, as well as Comrade Dipankar, the General Secretary of the CPI(ML).

The inaugural session of the Congress was held on 24 March, which was attended and addressed by various Left leaders including Comrade Binoy Viswam of CPI, Mohd Salim of CPIM, G Devarajan of Forward Bloc, Uday Bhat of Lal Nishan Party (Leninist), Mangat Ram Pasla of Revolutionary Marxist Party of India, Satyavan of SUCI (C) and RB Rai of Communist Party of Revolutionary Marxists of Darjeeling. The inaugural address was delivered by Comrade Dipankar, General Secretary of the CPI(ML).

The 10th Congress deliberated upon and passed resolutions on the international situation; the national political situation; on the Party organisation; on Culture and Media; and on Climate Change. The main focus of the resolution on national political situation is on the challenges of resisting the rise of fascism in India. In his inaugural address at the open session of the 10th Congress, CPI(ML) GS Comrade Dipankar said, “We are holding this Tenth Congress in the face of an unmistakable rise of fascism in India. The BJP today spearheading a neo-liberal policy offensive in every sphere, while simultaneously thoroughly polarising the society on communal lines and subverting and capturing the entire range of state and non-state institutions in furtherance of the RSS agenda. The manipulation of parliamentary procedures and subversion of institutions and constitutional offices has almost acquired the proportions of a parliamentary coup…. We now know for sure that the BJP is not just looking at another term in power by winning the next parliamentary elections, it is bent upon reshaping India in accordance with the Hindu supremacist blueprint of the RSS even as the latter marches towards its centenary in 2025. … This design must be defeated. This disaster must be prevented. And it is to this most pressing challenge and urgent task of the hour that we are dedicating this Tenth Congress of the CPI(ML).”

The resolution on the national political situation, adopted by the 10th Congress, observed, “Revolutionary communists must devise a strategy of effective intervention in the electoral arena to challenge and defeat the fascist forces wherever possible. Beyond the scope of where the Left forces can and must contest directly, the Left should make a distinction between the fascists and non-fascist forces within the non-Left camp and work for the defeat of the fascist forces. … The challenge of defeating fascism cannot and must not however be reduced to an electoral challenge, and within the electoral arena, it must not be reduced to the task of joining or supporting any so-called grand alliance to keep the BJP out. The experience of Bihar shows the inherent fragility and hollowness of one such grand alliance which had managed to hand over a decisive defeat to the BJP only to subsequently crumble and let the BJP in through the backdoor… Even while having to extend critical support to available electoral options against the fascists, we must never lose sight of the real task of building a powerful ideological-political counterpoint against fascism.”

The Congress also passed resolutions condemning the communalization of festivals and the communal violence unleashed in West Bengal and Bihar by the Sangh Parivar in the name of Ram Navami; expressing solidarity with University students and teachers protesting privatization in the name of ‘autonomy’ and protesting sexual harassment of students by a teacher in JNU; in solidarity with youth and students protesting unemployment and corruption in SSC and CBSE exams; calling for a National Protest Day on 2 April 2018 in support of the Bharat Bandh called by Dalit groups against the dilution of the SC/ST (Prevention of Atrocities) Act via a Supreme Court order; calling for Ambedkar Jayanti (14 April 2018) to be observed countrywide as ‘Save Constitution Day’; calling for countrywide padyatras from 22 April to 1 May demanding the rights to land and food, peasants’ and workers’ rights, and against communal frenzy and violence against minorities and Dalits; in support of the protests in Tamil Nadu’s Thoothukudi district demanding closure of the notorious MNC Vedanta’s Sterlite Copper Smelter Plant; calling for “back to ballot” or mandatory counting of VVPATs to verify EVM counts, in light of the doubts raised about EVMs; and demanding the release of political prisoners arrested or convicted on false charges using draconian laws, including Comrade Nilanjan Bhattacharya, State Committee member of the CPI(ML) in Odisha and in-charge of the Kalahandi district; the two Pricol workers Comrades Manivannan and Ramamoorthy; Comrade BN Singh of the CPI(ML); as well as Chandrashekhar Azad Raavan of the Bhim Army; rights activist GN Sai Baba; and Comrade Kobad Ghandy.

The 10th Congress also resolved to observe 2019 as the centenary year of the Jallianwala Bagh massacre, holding events commemorating anti-imperialist nationalism. The party will also commemorate 2019 as the birth centenary year of Comrade Charu Mazumdar, founder General Secretary of the party. The 10th Congress also called to observe the 200th Birth Anniversary of Karl Marx on 5 May 2018 by holding marches and other events celebrating Marx’s legacy in villages all over the country.

The Congress hall was named after comrades Swapan Mukherjee and Ganeshan (PV Srinivas), the dais was named after comrades Srilata Swaminathan and Jeeta Kaur, while Mansa town was renamed as Baba Bujha Singh Nagar after great revolutionary and martyr who had organised the Ghadar movement in Argentina and was later became one of the founders of Naxalbari movement in Punjab. He was murdered in a fake police encounter on 28 July 1970 near Phillaur.

Several international delegations also attended the Congress: including one of the Revolutionary Workers’ Party Bangladesh headed by General Secretary Comrade Saiful Haq; one of the Socialist Party of Bangladesh headed by Comrade Khaliquzzama; Comrades Susan Price and Tony Iltis of the Socialist Alliance, Australia; and a delegation of the South Asia Solidarity Group, Britain. Comrades Farooq Tariq of the Awami Workers’ Party Bangladesh and Comrade Taimur Rahman of the Mazdoor Kisan Party (MKP), Pakistan were denied visas to India but sent video messages of solidarity. The Socialist Party of Malaysia, the Embassy of Cuba, the Communist Party of Switzerland, and Vanguard Youth, the youth wing of the Patriotic Party of Turkey, also sent messages of good will and solidarity.